Report says city may lose about $490,000 during streetscape project 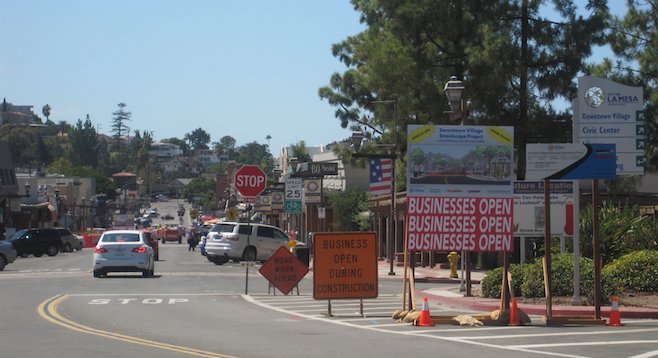 Starting October 15, meters will be covered with bags for 60 days. While drivers won't pay to park at the two- and four-hour meters, they will be ticketed if they stay beyond the allowed time. The council vote included a request for merchants to report on how the move to free parking affects businesses. The council also wants input from shoppers.

Construction schedule for east side of Spring Street

Mayor Art Madrid and vice mayor Ruth Sterling voted against councilwoman Kristine Alessio's motion that added a trial period and ticketing to an option examined in a community-development department report. The report stated La Mesa would lose about $490,000 if meters were turned off from October 1, 2014 to December 31, 2015, the project completion date.

The project includes new sidewalks, trees, and lighting. Work that started in July included the replacement of sewer lines. Construction will be implemented on a block-by-block schedule on both sides of Spring Street.

On August 4, work started on the south side of La Mesa Boulevard between Palm Avenue and Third Street. I walked there on September 9 at 1 p.m., about four hours before the council discussed meters.

People parked at meters on the north side of the street, and signs in several locations announced that businesses were open. Other signs displayed streetscape renderings. 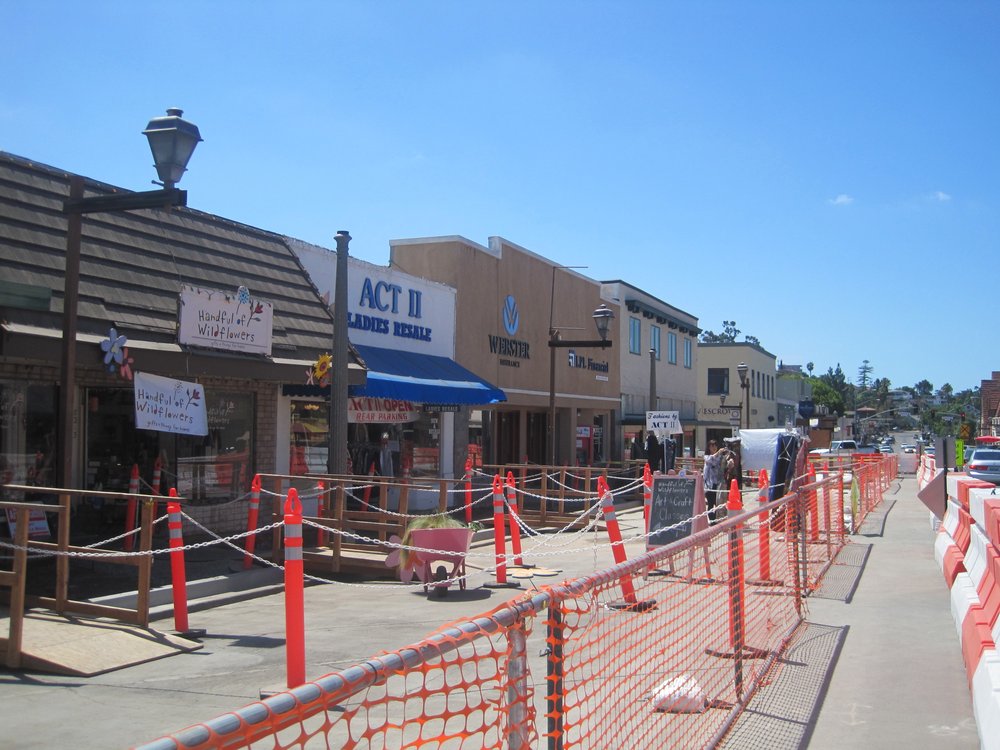 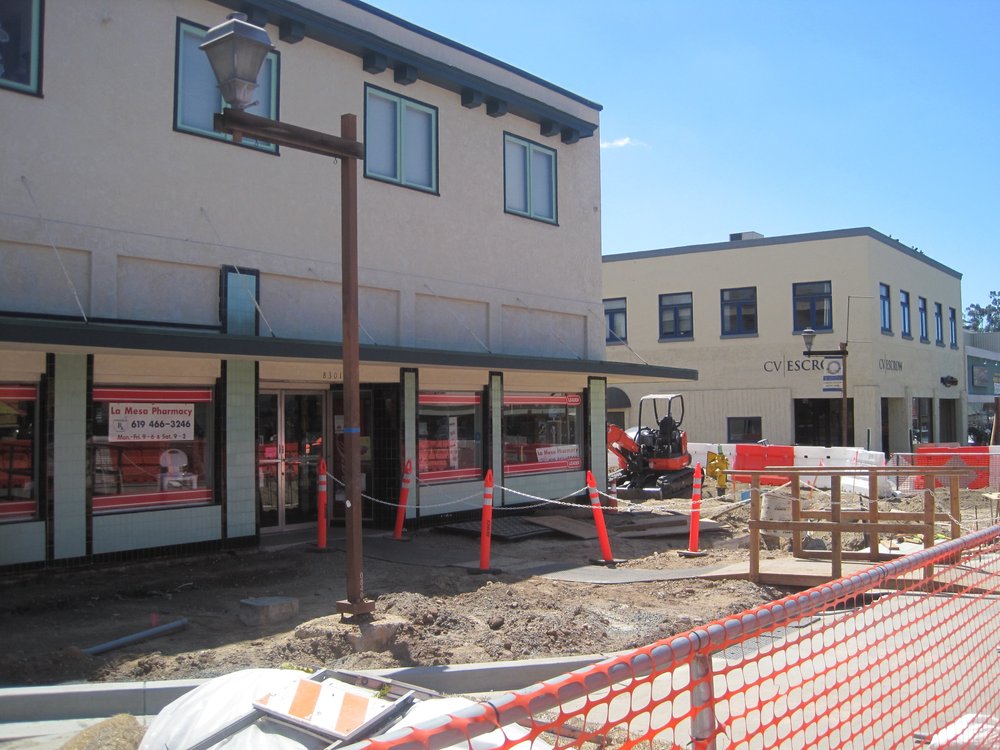 An orange-and-white barricade separated pedestrians from traffic. On the building side of the walkway was fencing with openings that led to business entrances. While construction was underway on the corner where La Mesa Pharmacy stands, some merchants utilized the open space outside their businesses. A pink wheelbarrow stood outside Handful of Wildflowers, and women's clothing hung near the pedestrian entrance to Act II resale shop.

The city council on July 22 unanimously approved the recommendation from councilman Ernie Ewin and then–vice mayor Kristine Alessio to ask the Community Parking Commission to assess the effects of suspending metered parking during the streetscape work. The commission on August 19 voted unanimously to keep meters "active [and] at current rates" of 50 or 75 cents per hour.

Commissioner Jim Wieboldt discussed that decision at the council meeting. He said commissioners hadn't heard from the business community. He also said changing the meter policy "goes against the cost-recovery directive" that the city gave the commission.

The council also heard from two residents and a merchant. Susan Taylor said, "This has been very devastating for businesses and their bottom lines. The businesses deserve a break." Janet Castaños said meters help fund the downtown redevelopment. She said free parking across Spring Street was no farther "than [walking across a parking lot] in the mall" and provided the "added bonus" of exercise.

Craig Maxwell, whose bookstore is on La Mesa Boulevard, said he talked to business owners "up and down the street. Business is way, way down for us." In addition, customers say, "Parking is tough."

As the council deliberated, Ewin said, "I think it's important to know most businesses aren't here because they're open."

"Or trying to be open," said Alessio.

Councilman Mark Arapostathis said merchants told him about their concerns. "Some gesture of good will needs to be made," he said.

Madrid and Sterling spoke about revenue lost with the suspension of paid parking; they were the only ones who voted in favor of Sterling's failed motion to keep the meters active.

While Sterling and Madrid talked about expenses that include the future $50,000 annual cost for maintaining the streetscape, Alessio referred to the loss of sales-tax revenue. She later said free parking is "a gift to shoppers; it's a gift to businesses."

Community-development director Bill Chopyk said the October 15 starting date gave the city time to order signs that explaini the parking-enforcement policy and bags for the meters.

I've spent a lot of quality time with the Lickona kids at Cosmo's and haven't been able to take them for hot chocolate of late because of the parking situation. What's being done to the area boggles the mind. La Mesa Blvd. was a perfectly lovely tree-lined getaway until these idiots decided to fix what wasn't broken. Your taxpayer dollars at work. Remember this next time Madrid runs for office.