“The whole thing happened without any notice whatsoever.” 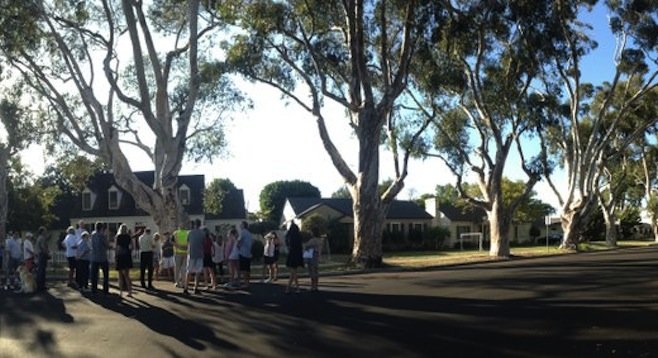 Kirby Watson has resided in the shade of the eucalyptus trees on Coronado Island’s E Avenue for over 45 years. She said she was devastated when she received a letter from the City of Coronado last week informing her that several of the trees on her block were destined for removal.

Watson was saddened by the idea of losing the trees that she considered central to her neighborhood, but was more disturbed by the city’s handling of the issue.

“I just got my letter on Saturday and here we are on a Wednesday,” Watson said on September 10. “The whole thing happened without any notice whatsoever.”

In early 2014, a eucalyptus tree branch fell in the street of E Avenue’s 100 block, causing no damage but prompting a concerned citizen to file a safety complaint with the city. Upon closer inspection by certified arborists, 4 of E Avenue’s 18 eucalyptus trees were found to be structurally unsound or decaying.

“This city loves its trees,” said Cliff Maurer, Coronado’s director of public services. “We didn’t reach this decision lightly, but these trees pose an unacceptable safety threat.” They will be removed within the next few weeks.

The trees are between 60 and 100 years old and are over a hundred feet tall. Eucalyptus trees are self-pruning, meaning that they naturally discard dead branches, which can weigh thousands of pounds apiece. “These trees are reaching the ends of their lives,” said Falco. “When trees die, they don’t just disappear — they can fall apart. That’s scary.”

Risk aside, the trees are gorgeous. Several of the block’s homeowners said that the ambiance created by the trees was a major factor in their decision to invest in property

“People stop in the middle of the street to get a picture of these trees,” said resident David Korrey.

Most of the decision process took place behind closed doors. According to Maury, after the city received the initial safety complaint, it had a litigative responsibility to investigate the issue. West Coast Arbors performed two assessments before making their recommendation, which was presented in closed council to the district attorney and city-council members.

The city attorney reviewed the judgments that came against other cities in similar urban forest cases. “The city council voted and came to a consensus,” said Maury.

“It’s ridiculous that this has been going on for months on a need-to-know basis,” said Rob Watson. “It’s our job, as residents, to take action.”

Amy Steward, a 22-year resident of E Avenue, is planning to do just that. “This whole thing was done underhandedly,” she said. “We’re going to mobilize the neighbors.” She will host a meeting in her home on September 13. “We want to see if we can slow this process down...or stop it altogether.”

“I just got my letter on Saturday and here we are on a Wednesday,” Watson said on September 10. “The whole thing happened without any notice whatsoever.”

SO WHAT??? What are you going to do with "notice"?

“We’re going to mobilize the neighbors.”

To do what? "We demand the right to have dead trees fall on us!" Sheesh...