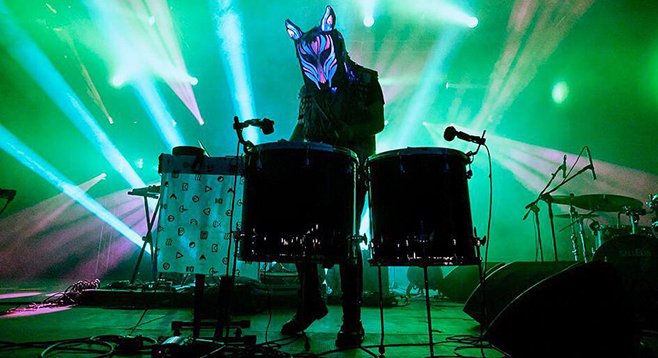 One day, someone will figure out how to record the feverish sounds and music that we imagine we hear in our dreams. Until that advent in technology, we’ll make do with Slow Magic. He’s a laptop artist/deejay who has elevated the gig into something approaching performance art. Slow Magic is a drummer/percussionist and a keyboardist, as well as a laptop tech. He wears a wolfish totemic mask that lights up in a way that it reminds me of my grannie’s old silver aluminum-foil Christmas tree with its rotating three-color light wheel.

A critic might call his music a paint-by-numbers version of Moby, but I disagree. The qualities that elevate Slow Magic from mere duplicity to high art are the song passages that sound like one thing on the surface but that are about another thing entirely — just like dreams.

As a public figure, the laptop artist/deejay continues to intrigue. Nerds they may be, but they are the new rock stars. Some of them command exorbitant guarantees and live the jet-set life because they draw huge audiences, this to the chagrin of those who have spent much time perfecting, say, the electric guitar. Many laptop artists have realized how boring a dude or dudette standing at a mix table can appear. It follows that the performers at the top of that heap have developed a persona for purposes of separation from the pack.

In the case of Slow Magic, “music made by your imaginary friend” is all that is on his Facebook page. There’s an information blackout around the artist. He keeps his given name, residence, even images of his face on the down low. Why? He told a reviewer once that he wanted it to be about the music, etc. etc. But in that respect, Slow Magic has given us a glimpse of something rare and strange, and for that I am grateful.