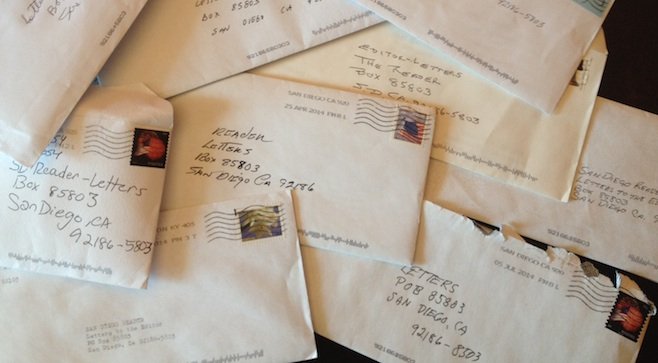 No Feast! for You

I guess “A Perfect Food Day” (September 4 cover story) means a lot of driving for anyone living in East County, North County, or South Bay. Not a single restaurant from El Cajon, Escondido, Poway, Chula Vista, or any parts beyond was mentioned anywhere in your article. I guess we don’t count.

Regarding “It’s Hard Out Here for a Playa,” the SD on the QT guest editorial from high school senior Troy Rampant. Never have I read anything so offensive as this “article.”

If it was intended as a spoof, then it is pathetically unentertaining. Even if Troy meant only to write funny fiction, I hope every female he ever meets has read this article and decides it is best to steer clear of him. If this is indeed his party philosophy, I hope the police read the Reader and look him up. And, hey, Mom — did you read this little gem?

The only reason to pick up a Reader anymore is for the puzzles. Everything else is a waste.

Re: Sporting Box: “Knowing When"

Patrick Daugherty must be a young sports writer to have written, “Those 55 points [that San Francisco scored against Denver in the 1990 championship game] were the most ever scored in an NFL championship game.”

If Mr. Daugherty would check the result of the 1940 NFL championship game, he would see that the Chicago Bears edged the Washington Redskins 73-0. It is also the most number of points ever scored in an NFL game by one team. It was also the last time an NFL player didn’t wear a helmet in competition.

Regarding the horrific attacks on women in North Park (Neighborhood News: “Community Turns on Attacker(s)”), one point is never mentioned, perhaps due to the persistent, politically correct idea that we must never blame the victim. From what I’ve read, most of the attacks occurred around 1 a.m. or 2 a.m. on women walking alone.

I was raised in the ’50s and ’60s in the Midwest, and it was always drilled into me that a woman never walks home alone after dark — down dark alleys no less ­— unless she’s a trained police officer or a martial arts expert.

Seriously, what were these ladies thinking? In a huge city like San Diego, your freedom to walk when you want, where you want has got to be tempered with common sense. Whether we want to admit it or not, most women are physically weaker than men. It’s biology, honey! Stop the risk-taking. Drive, walk in pairs, or stay home.

A Show of Feet

True enough, executives and management teams prefer our weather, ocean, and trendy lifestyle to that of Texas. But they are increasingly putting their plants and production facilities in more business-friendly states like Texas. As a result, our middle-class families are fleeing our state to escape the cost of living, high taxes, and big government regulations to live in a state where they can be homeowners and raise families.

Here is a data point that illustrates whether people are moving toward Texas or toward California. I just looked up the cost of renting a 14-foot U-Haul truck in Houston for a move to San Diego: $733. The cost of renting the same truck for a move from San Diego to Houston? $1650. Apparently U-Haul is tired of paying to drive empty trucks from Houston back to San Diego and adjusts their prices accordingly.

People are voting with their feet, and it is not for California.

A grammar point for Siobhan Braun: It’s who or whom when referring to a person, not that.

“When Two Closets Become One,” Street Style, June 13: “There is nothing better than a best friend that has similar dimensions.”

Ian Anderson hates life. Your new food critic could find fault in a bowling ball. Sorry for all the start-ups that he has had the privilege to try on someone else’s dime. The guy probably doesn’t even own a set of knives. If he does, he better have Band-Aids close.

He complains about flies on an outside patio (“Sliders on the Sidewalk"). Just one of the many observations he chooses to include in his rhetoric.

Having owned four restaurants in San Diego, if he ever spent his own money to follow his passion he would understand how painful his bullshit jabs are. Your hiring of a guy that rarely has any good observations confirms why, after 20 years, I got out of the restaurant industry.

When was his last good review? Yet another food snob with no credentials to back it up. Guaranteed that restaurant advertising is down because of this smuck. Keep hiring winners, Reader.

What is with the cheap, crappy paper that you are suddenly using in your magazine? It is hard to turn the pages, and whoever came up with this idea — thinking how much money you would save and thinking how dumb we all are — is a miserly skinflint. Bad idea.

I have been reading your magazine since it was invented and now it isn’t worth my time.

Still noticing that, for at least the last eight weeks, there has been an ad in the Photo section for exercise equipment.

You guys used to be the best place in San Diego to find roommates. Now you really suck. What happened?? Almost nothing there at all in print or the website.