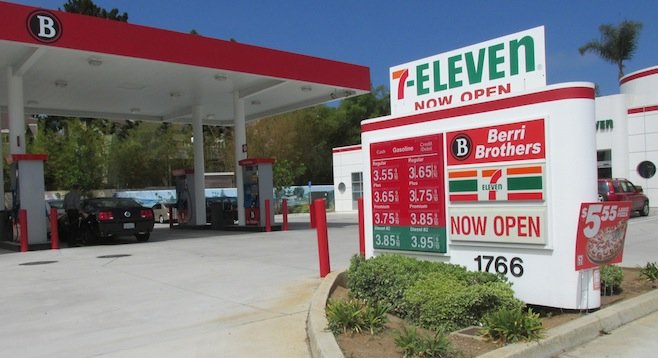 Gas prices along North County’s coastline — from Del Mar to Carlsbad — usually average 10 to 15 cents higher than most areas of San Diego.

However a few days ago, the FOX5 morning news reported that, according to gas-price-watcher website GasBuddy.com, the Berri Brothers gas station in the 1700 block of North Coast Highway 101 in Leucadia had the cheapest gas prices in all of San Diego County. It had been the cheapest for almost a week — $3.50 a gallon for regular.

On September 5, although the station had to raise its prices by 6 cents, it was still 12 cents cheaper than the nearest Costco, less than five miles away; and at least 20 cents cheaper than any of the just-over-the-hill name-brand stations off I-5.

Owner David Berri operates the only gas station on the 25-mile coastal route from La Jolla to just before Vista Way in Oceanside. In the 1970s, there were 25 gas stations on the same stretch of highway.

Berri says, “Gas prices for the independent gas market has been good over the last two years. There’s a surplus of gas.” Berri’s family owns 12 other stations, mainly in Orange County,

Although he says he wants to keep his prices lower than anyone else's, prices at independents fluctuate quicker than the major brands. When supplies tighten up, their prices go up. Yet, when fuel prices start to fall, like the cycle we are in now, independents drive the falling prices, forcing the majors to follow along.

When he opened as a Mobil station in 2007, Berri had a lot of challenges with the city and neighbors. People didn’t want a gas station there, even though the site has been a station for decades — a former Hancock station that closed in the 1970s. (In the 1950s and ’60s, Hancock stations were known for their flamboyant jet-age architecture, as was Leucadia’s. And at the pump, one could dial up seven different qualities of gas, everything from lawnmower gas to racing fuel.)

Several years ago, when Mobil merged with Exxon, the brand became less marketable, according to Berri. Thus, two years ago, Berri changed his onsite convenience store to a 7-Eleven and dropped the Mobil branding earlier this year. “Now everyone is very welcoming,” said Berri.

Many drivers don’t realize that, when pumping at an independent station, it’s a major chain’s surplus gas. The local distributor, located at the tank farm across the street from Qualcomm Stadium, sells its surplus gas to independents at a lower price. Berri says one week he could have Shell’s gas, the next, Chevron’s.

And in California, says Berri, gasoline is so environmentally regulated, there is no such thing as “bad” or “watered down” gas. With computer-controlled, fuel-injected cars, no vehicle manufactured in the past 15 years runs any better or worse on any particular brand of gasoline. Oil companies think it’s all about the marketing; most motorists would say it’s about the price per gallon.

Cost-conscious consumers note that independent stations lead the way on lower gas prices, followed by AM/PM and USA/Thrifty/United Oil stations (same ownership), supermarket stations (if you use their club card), and Valero. Chevron tops the highest per-gallon cost in Southern California, followed by national brands such as Mobil/Exxon, Shell, 76, and Texaco.

Footnote: In high school, this writer and his pals would spend their Saturday afternoons driving up and down the coast road, stopping at gas stations for their “No Purchase Necessary” promotional giveaways — game pieces, glasses, pens, pencils, commemorative coins, and hats.

Wow, there's so much that could be written about gasoline branding and marketing. All those brands past and present that you mentioned used to be independent of one another, but no longer. Texaco, for example, in the late 80's or early 90's let Shell have its downstream operations, and allowed Shell to use the Texaco brand at the retail level for a set number of years. But when Texaco was purchased about 15 years ago, it was bought by Chevron, not Shell. And now Chevron owns the Texaco brand again. When was the last time you saw a Texaco station? What will Chevron do with the Texaco brand? Will we see it again in some reincarnation?

Don't worry, gas taxes will go up in January. Remember to vote Democrat!

I cannot resist commenting on this . . . My father owned the Hancock Service Station at the corner of Vista Way and Hill Street in Oceanside, CA. Hill street is also PCH (Coast Hwy). "Ed's Hancok Service'. The orange & black rooster was our logo. We were connected and serviced by Signal Oil. The imaginative pumps were mgf'd and serviced by Wayne Pump Co. I working there along his side and learned the business. The address was 1943 So Hill Street. It is now some 'cut rate' convenience store gas station. At the time we were a Full Service Station, wearing uniforms, hats and greeting each customer with a smile; all four of us. One checked the tires, one checked under the hood, one washed the windows and one pumped the petrol. Wipers, oil, tires, shocks, oil changes and tune-ups were our upsell. We sold an amazing amount of nylon 'Super Test' tires, mounted and balanced while you wait in 20 minutes using at first a manual tire changer and then we purchased the revolutionary "Coast 1010" hydralic machine. An oil change was $9.97 plus filter. Low grade 7 x 35 / 14" Super Test Tires were only $19.95 ea plus mounting & balancing (bubble balance); high speed balancing was an add'l 5.99 / wheel. We offered seven different grades of 'econ-o-blend' gasoline; 500-600-700-725-735-745-750. Regular or 500 had an octane rating of 86 while 750 was ethyl and rated at 94. Regular sold for 27.9 cents / gallon. When price wars occured we dropped down to a one time low of offering regular (500) @ 19.9 cent / gallon! I took control and managed the station after my fathers passing. I renegoitated our gasoline supply in 1972 just prior to the Arab oil embargo of 1973 and our contract had a provision for an 'unlimited' supply, which meant we did NOT have to ration, and remained open! We switched suppliers and became "Ed's Union 76". We were also a U-haul dealer and our U-haul dealer code was 50-549. Our telephone number was 714-729-1940.
We offered 'GREEN Stamps' or 'Blue Chip' stamps for redemption of gifts at the local outlet. In 1968 it became very popular to offer with a 'fill-up' of 24 gallons or more give aways; sometimes cutlery, steak knives, glasses, or even oil burning lamps. Don't forget that a 68 Impala or Cadilac Sedan De Ville had 28 gallon tanks! Photo of dad and me attached 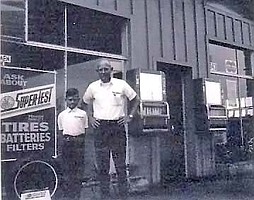