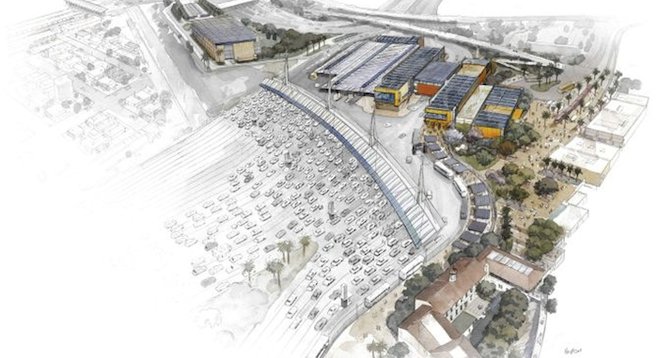 On Monday, September 8, Jason Wells, cofounder of the San Ysidro Border Coalition, will head to Washington D.C. to ask the federal government for UETA Duty Free Americas to retain three acres of land at the San Ysidro Port of Entry so that they can build a multi-use parking structure.

Recently, the $226 million Phase 3 reconfiguration of the San Ysidro Port of Entry was fully funded by the president’s 2014 budget. Phase 3 includes massive construction of the I-5 freeway at the border. The northbound lanes will increase to 62 booths and the southbound lanes will expand from 5 to 10 lanes. Wait times at the border are expected to be reduced to 30 minutes.

The expansion of the southbound lanes also means that the federal General Services Administration will purchase a parking structure — as well as UETA’s property — through eminent domain and demolish it to make way for the I-5.

The problem for San Ysidro community members is not only will Phase 3 take away over 1000 parking spaces, causing greater traffic gluts than already exist, but UETA Duty Free Americas may be forced to leave.

On August 19, San Ysidro community members met General Services Administration representative Anthony Kleppe at the Front art gallery to discuss the Phase 3 plans. Many in the audience held signs such as “More Options Are Better.” Jason Wells approached the front table and slapped down a petition signed by more than 5000 community members. Supporters of the petition included former mayor Jerry Sanders. The petition asked the General Services Administration to allow UETA to retain three acres of property to erect a structure that could offer 300 new jobs to San Ysidro.

Simon Falic, chairman and chief operating officer of Duty Free Americas, has reputedly been a philanthropist in San Ysidro for the past 15 years. The company is one of the top five donors to Casa Familiar, a nonprofit organization that provides low-income housing as well as 50 other service-oriented programs to the Spanish-speaking community. This year alone, UETA reportedly donated $25,000 to Casa Familiar’s programs.

At the August meeting, Kleppe said an appraisal of the site had not been done. He added, “The fact of the matter is that we’re still in the planning and utility phase. We’re going to have a conversation with the Duty Free folks in a relatively short amount of time, and again, our expectation is we are going to find a mutually agreeable solution.”

After the meeting, Wells immediately sent a letter to Commissioner Norman Dong of the GSA in Washington DC who has the final say in whether UETA can stay at the port of entry. Wells wrote, “Bluntly, the Region 9 staff was condescending and very dismissive of attendees’ desire to discuss enhancing Phase 3 with Duty Free Americas’ (DFA) proposal.”

On next week’s DC trip, members of the San Diego Regional Chamber of Commerce will accompany Wells. They will meet with Dong as well as a commissioner from Customs and Border Protection (CBP) to discuss UETA’s proposal.