Find a few new reasons to get to a white-sand Caribbean beach. 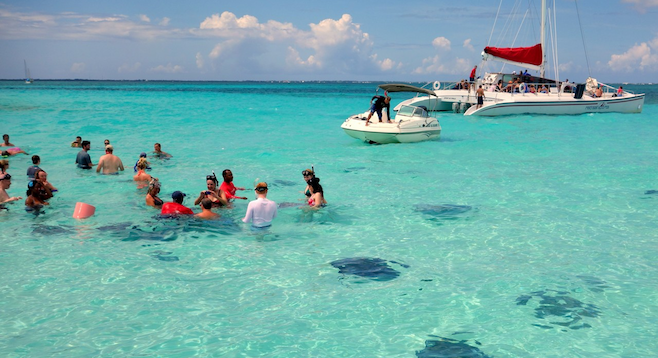 Coral outcrops surrounded by coral reefs, the Cayman Islands are three tiny islands (Grand Cayman, Cayman Brac, Little Cayman) comprising the British Overseas Territory of the Cayman Islands in the western Caribbean. Just south of Cuba and northwest of Jamaica, the islands attract divers from around the world. 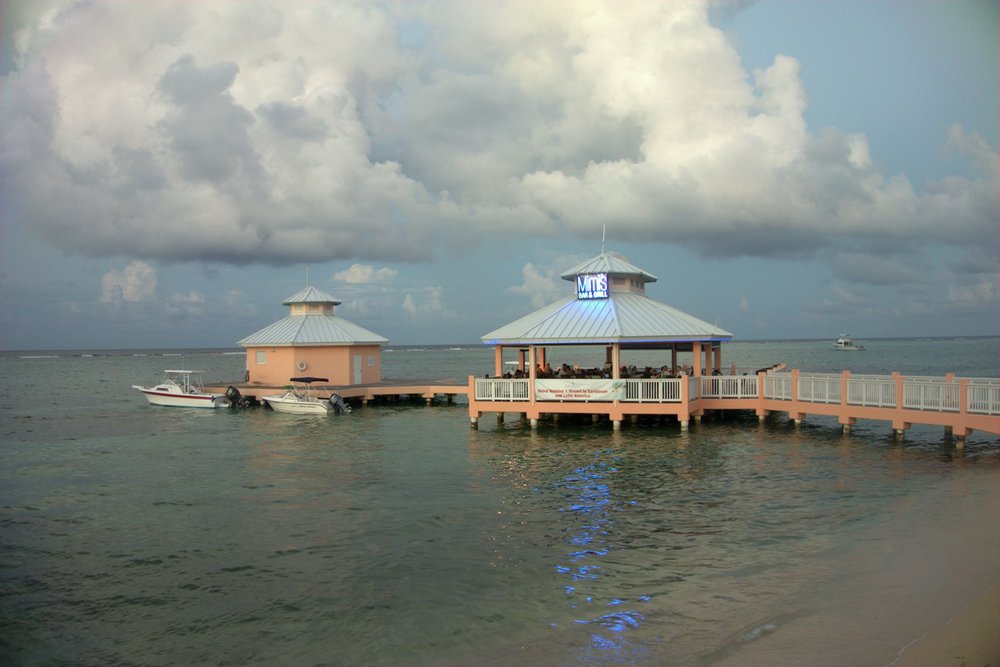 Mimi's Dock Bar at Morritt's on Grand Cayman, the "only dock bar in the Cayman Islands."

With swimming suit and suntan lotion packed, I hopped on a plane to immerse myself in island time. Though most visitors come to dive, snorkel or simply swim in the sparkling turquoise waters, I found opportunities that were singularly Cayman experiences.

Here are a few that shouldn’t be missed in my book:

Stingray City is considered to be one of the best shallow dives and snorkeling spots in the world. Since I don’t dive, I was relieved to find that the three feet of water suited non-swimmers as well. As many organized tours ferry their passengers the short distance to the stretch of sandy seafloor at the North Sound, be prepared to have plenty of human company in addition to the dozens of southern stingrays that will be gliding freely around you.

These docile creatures are quite graceful underwater, and seem to move effortlessly with their wing-like fins. The gray skin on top is very rough with a texture of sandpaper, so I was surprised to discover that their underbelly is as smooth as a baby’s bottom.

Years ago, Grand Cayman’s popular North Sound had a cut in the reef which was a popular route for fishermen to enter and then sit in calm water while cleaning the day’s catch. As they threw the bones and guts overboard, rays would come and feed on the discarded fish parts. These days, the fishermen have long been gone but the stingrays remain, flashing their brilliant white undersides as they soar across the reef. 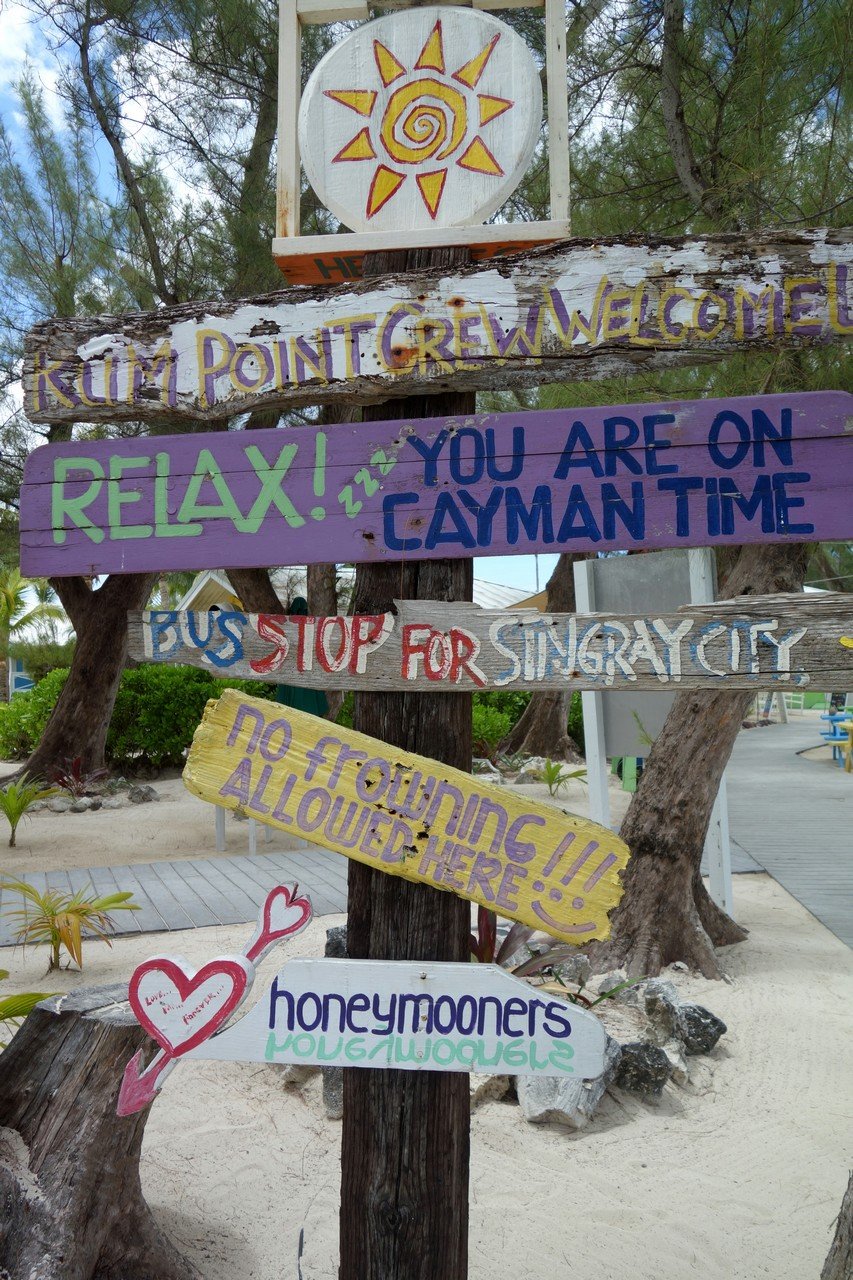 Be sure to bring a waterproof camera to capture this unique event. Also, if you decide to join the stingrays for a swim, remember: they have long, whip-like tails with razor-sharp serrated barbs, so you should never swim directly over a stingray – which is how Steven Irwin was fatally injured.

And if you're diving or snorkeling on your own, avoid close encounters with the rays. (Here's more on stingray safety in the area.)

The Botanic Park is home to blooming orchids, squawking parrots, songbirds and nature trails that give you a sense of the flora and fauna in the Caymans. It's here you'll also find the famous blue iguana – the only place in the world where the blue dragon, a relic of the dinosaur age, lives in the wild. It was less than 10 years ago that there were only 10–25 blue iguanas remaining. Once a critically endangered species, breeding efforts have managed to raise the population to about 750, resulting in the International Union for Conservation of Nature to downlist the species to endangered-only.

Unfortunately, the heavens opened up with a tremendous downpour during my time at the Botanic Park. Since blue iguanas prefer open areas in dry forests, they were nowhere to be found. My photos of the blue iguana statue would have to suffice until my next trip. 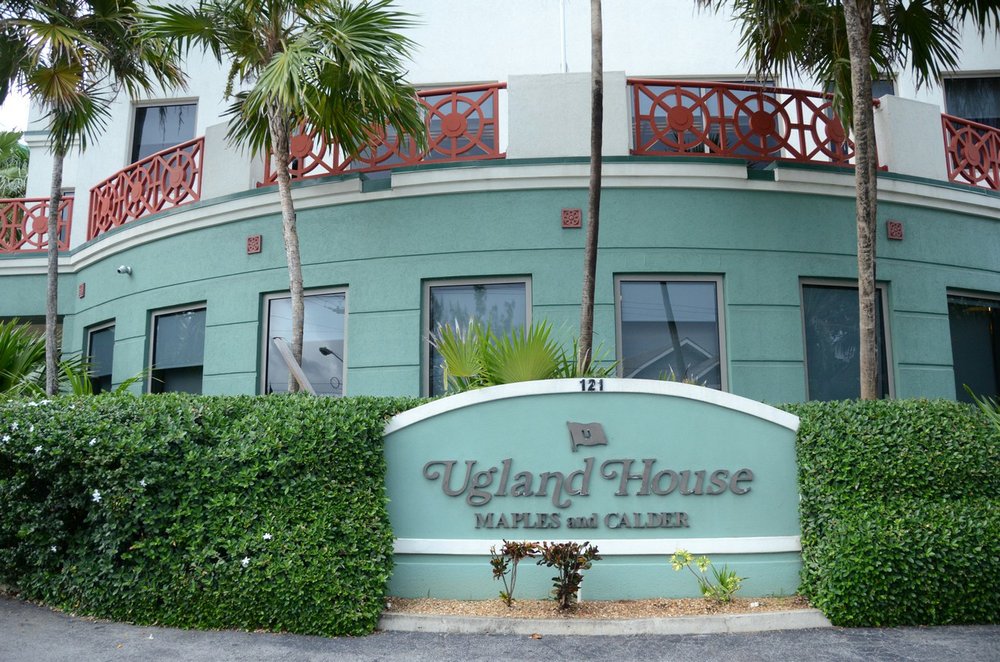 The Ugland House, not so noteworthy from the outside.

At first glance you wouldn’t know that this rather unpretentious five-story turquoise and coral office building, located in the capital of George Town in the British West Indies, is home to over 19,000 companies registering this place as their office address. (Surprisingly, I didn’t detect any evidence of outside security and no one stopped me from taking a photo.) Called the Ugland House, it's home to a sundry of financial firms, from major investment funds and international joint ventures to the international law firm Maples & Calder.

It's the fifth-largest banking center globally in terms of deposits – with $1.9 trillion U.S. dollars currently in deposits. As President Obama said in 2009: “…either this is the largest building in the world or the largest tax scam in the world.” Since the Cayman Islands have a zero-percent tax rate on all types of income, including capital gains and corporate taxes, it makes sense that this is an attractive place to establish a business or enterprise.

Whether you can call the Cayman Islands a tax haven may be debatable, but one thing is clear: the Ugland House has to be one of the biggest little office buildings in the world.

Both Romney and Bain Capital park $millions there.