Latino officials to get free tour of Israel 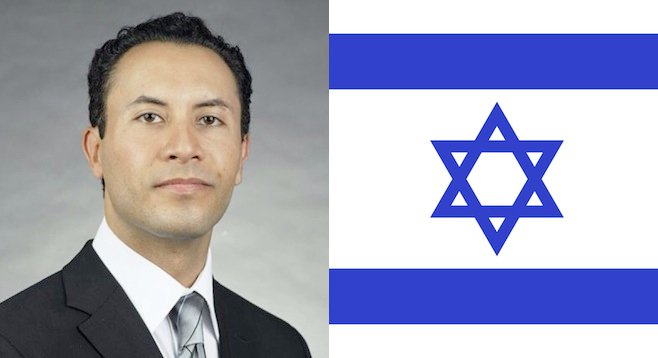 Yet another San Diego politico is set to head off for a free fact-finding trip to Israel, thanks to the American Israel Education Foundation, an offshoot of the American Israel Public Affairs Committee, also known as AIPAC, which styles itself as "America's pro-Israel lobby."

As previously reported, free trips sponsored by the nonprofit this year have included a $17,908 August tour of Israel for Democratic congresswoman Susan Davis and her husband Steve. Highlights included a session on "Ethics of the Israel Defense Forces" and a sit-down with prime minister Benjamin Netanyahu.

Last year, Democratic congressman Juan Vargas and staffer Aaron Allen set out on separate trips paid for by the committee. Vargas and his wife received a $16,230 tour in August, and Allen ran up a $5868 free tab in December, according to House reports.

The National Journal has reported that Israel is by the far the top destination for congressional free junkets of both parties, with a total of $1,940,000 spent on 142 trips in 2013.

But the largesse isn't limited to federal officials.

In October of last year, according to a disclosure report filed by San Diego County sheriff Bill Gore, assistant sheriff Patricia Duke went on a $10,337 law-enforcement training trip to Israel courtesy of AIPAC.

And earlier this year, San Diego port commissioner Garry Bonelli, an ex-admiral from Coronado, obtained the blessing of lawyers for the state's Fair Political Practices Commission to head out on a two-week tour for retired U.S. generals and admirals “to meet the top echelon of the Israeli military and political leadership.”

The sponsor was the Jewish Institute for National Security Affairs, whose website describes the group as a "non-profit, non-partisan organization to advocate on behalf of a strong U.S. military, a robust national security policy, and a strong U.S. security relationship with Israel and other like-minded allies."

Now it’s another port official's turn for a vetting.

"Mr. Castellanos will depart on December 6, 2014, and return on December 14, 2014," writes Morazzini. "Participants will include elected officials, civic leaders and political activists who seek to gain an in-depth understanding of modern Israel and the United States–Israel relationship….

"The program will include discussions with current and former Israeli government officials, Palestinians and leading academics and journalists," the letter continues. "Through on-site visits or seminars, Commissioner Castellanos will have the opportunity to learn about innovative Israeli approaches to international and domestic issues.

"In addition, he will tour religious sites in Jerusalem and near the Sea of Galilee, and will participate in strategic surveys of Jerusalem and the Israeli borders with Lebanon, Syria and Gaza. The Commissioner will come away with a much deeper understanding of Israeli politics, society and culture."

It's okay for Castellanos to take the freebie, exceeding the port's usual $440 gift limit, because the Israeli group is a nonprofit and "the trip to Israel is directly related to a legislative or governmental purpose and/or concerns international public policy."

"Accordingly, payments provided by [American Israel Education Foundation] for Commissioner Castellanos’ lodging, transportation and food related to his trip to Israel are reportable gifts that are not subject to gift limits."

But the port official isn't entirely off the hook, says the advice letter. "If Commissioner Castellanos accepts gifts from the source identified above valued at $440 or more, he may be prohibited from participating in governmental decisions affecting that source. If this occurs, he should seek further assistance."

On the one hand, if you ever think you might want to run for public office -- and what up-and-coming, attractive, well-situated Latino like Commissioner Castellanos doesn't think that's a possibility -- or even those entrenched-at-the-public-trough members of Congress Susan Davis or Juan Vargas who want to stay there as long as the round trips from D.C. to the West Coast are feasible -- they all will need re-election support from the San Diego Jewish Community whose richest and most prominent member is Irwin Jacobs, and sterling cred comes from firsthand observation that can be discussed at cocktail parties.

On the other hand, these very expensive and exotic learning and lounging experiences paid by AIPAC are Israel's best line of defense -- keeping the United States Congress in its corner -- a strategy that impoverished Palestinians cannot begin to match. In this circumstance, Israel is Goliath.