The Melvins are the grungiest of them all 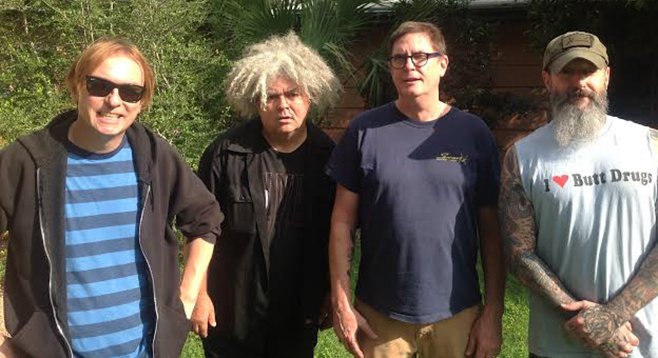 Sure, grunge is long gone, but the grungiest of them all, a sludge-metal band that many consider to have been the musical point of detonation that created the grunge movement, never got that memo. The Melvins are still making records and filling nightclubs. How? It’s possible that bands claiming to have been influenced by the Melvins (namely Nirvana, Mudhoney, and Soundgarden) sound so different as to have rendered the Melvins immunity from the winds of change that spelled doom for all but them and, say, Pearl Jam.

The Melvins play slower and louder than anyone I can think of at present. They remind a listener of the 1960s band Vanilla Fudge, but with song structures seemingly left to chance and the occasional stab at humor: “Gotta word that’s coming up coming up my throat/ It’s a long ass word, gonna make me choke.” A Melvins show is a dress-down affair that rolls outward from the stage in sheets and waves of modal doomsday electric guitar propelled at glacial speed by an otherwise earth-shattering rhythm center.

They first appeared as a high school power trio. With the exception of membership changes over the years, the addition of a second drummer, and founder Buzz Osborne’s ’fro going gray, little has changed inside the Melvins camp. Career highlights have to include some of the interesting talent they have invited along for the ride over the past 31 years: more than once, Gene Simmons of Kiss, who is possibly the worst (albeit best known) of rock bassists gigged with them. Then, there was Lorax Black, daughter of 1930s star Shirley Temple, who played bass as a bona fide band member off and on for five years. The band is now touring behind Hold It In, not only their 22nd studio album, but a primal toast to longevity.