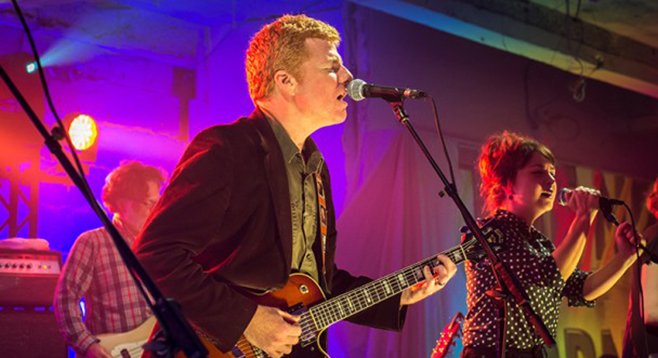 It’s tough to believe that the New Pornographers have been chugging along for 15 years now. During this tenure, bandleader Carl Newman and company have delivered their infectious blend of sugary indie rock to the San Diego masses several times. The local fans who have been along for the ride since the early days may remember a show about a decade ago that was nearly derailed by dentistry.

Longtime bassist John Collins recalled the painful day for the Reader: “It was my lower-left first molar. It had a full-on abscess going on in it. You have what basically amounts to a massive pimple on the wrong side of your tooth. It’s putting a lot of pressure on your jawbone and the nerves in your tooth that are infected. All the pain to begin with was up in my sinuses for some reason. I was convinced I had chronic sinusitis and convinced the doctor along the way (before I went to the dentist) that I had sinusitis. So I was treating it with some antibiotics that weren’t doing anything for me.”

By the time the tour reached Arizona, Collins’s expanding jaw clued him in to the reality that he wasn’t dealing with a sinus issue. He secured an appointment with a dentist during their stop. “I managed to get into a dentist’s place in Tucson, but you do the math and you’re, like, ‘Well, if we drive for 80 miles an hour for eight hours, we’ll make it there in time to play, but we have to leave in 15 minutes.’ So I sat there, he did an x-ray, and then he said, ‘I can fix this in 20 minutes.’ And I said, ‘I have to go,’ and I had to walk out of there, which was terrible. He was, like, ‘I just need to drill a hole and the pain will go away substantially. It won’t be fixed, but the pain will go away substantially.’”

Not having 20 minutes to spare, Collins left the dental office. The excruciating pain continued, and while the band was late and missed their soundcheck, they still played their show at the Casbah that night.

“We just floored it,” Collins said. “I remember I did some driving for a while to try and get my mind off it, but I had to pull over in the middle of nowhere and give up and curl up in a ball and let someone else drive.”

Pains of Being Pure At Heart, New Pornographers

Collins took one for the team and completed the rest of the tour before he had the issue taken care of by an oral surgeon back in Vancouver. He was amazed by the speed of the procedure and how the pain from the abscess retreated immediately. He began to second-guess his decision to bypass the operation in Tucson.

“It’s amazing how quickly they can fix it, but I just couldn’t take him up on it...and I should’ve, probably. I should’ve taken a chance but I was too worried that we were gonna miss our Casbah show,” Collins said. “I don’t wanna be the guy that makes us miss a show.”

Mr. Collins, his now-healthy jawbone, and the New Pornographers will appear at the North Park Theatre on Saturday, October 18.