Some residents demand "no more than 4" stories; revised plan proposes 10 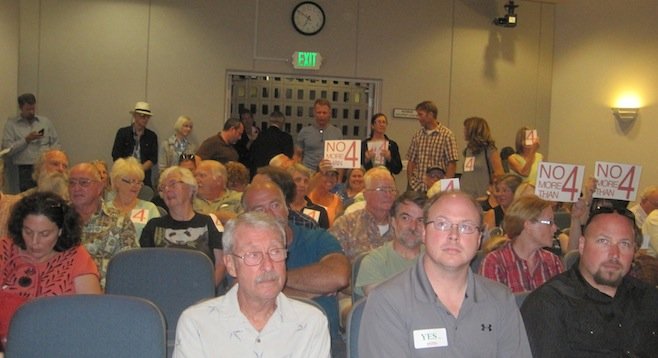 The La Mesa Planning Commission on October 1 voted 6-1 to recommend that the city council deny a specific plan for Crossroads of La Mesa at Park Station, a mixed-use project that would raise the city's height limit to 110 feet (about ten stories). That action followed a 6-1 vote recommending approval of the environmental impact report for the project, which consists of multi-family residences, a hotel, and commercial and office space. Commission vice chair Michele Hottel cast both no votes.

The plan revised in August is proposed on a 4.75-acre site that the Kitzman family has owned for more than 50 years. The land is bounded to the north by Interstate 8, to the west by Baltimore Drive, and to the east by Nebo Drive. The southern boundary is American Legion Post 282, which is on the 8100 block of University Avenue. Until this summer, the plan co-applicants were the Legion and South Baltimore, LLC (Frank, Joseph, and David Kitzman are listed as contacts).

That arrangement changed at the June 18 planning commission hearing on the then-5.23-acre site. Lenny Guccione, American Legion 282 house manager, announced that the Legion was withdrawing as a co-applicant. Commissioners tabled the matter, and the city received official notice of the withdrawal in a July 1 letter. 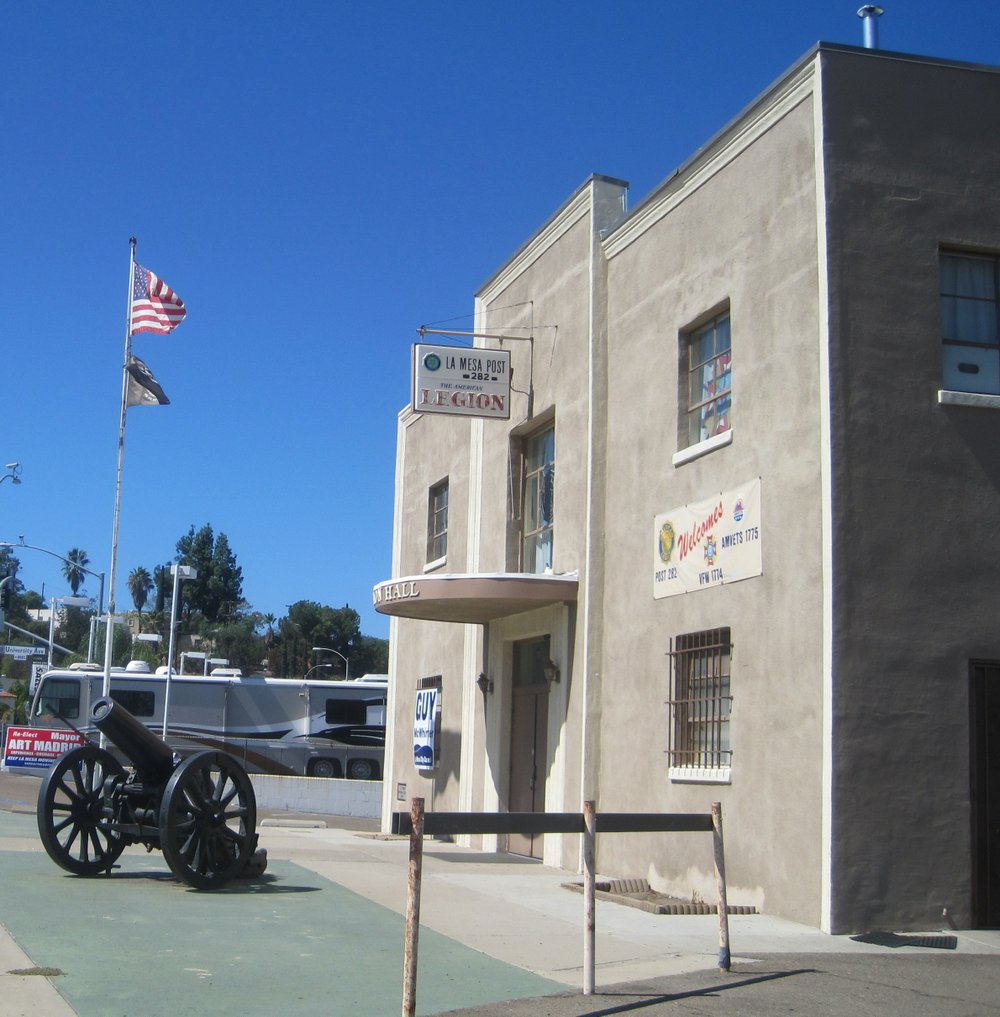 Guccione and John "Jack" Porath (American Legion 282 commander) wrote that the post "joined with" Park Station on the “mixed-use zoning proposal"  approximately seven and a half years ago. This allowed Legion membership "should they decide, to do something with their property in relation to the development or on its own without revisiting a new zoning application. Over the years and many plan revisions later, we believe it is not in the interest of the American Legion or the City to continue to be part of this application any longer."

American Legion La Mesa Post 282 was founded in 1923, according to the post website. The post paid $2525 for a parcel of municipal property in 1946, an arrangement that included a land swap. Construction on a Legion hall started in 1947 and was finished in time for the New Year's Eve dance. Near that building now is the Vietnam Veterans Memorial. It formerly belonged to the city and is now maintained by Post 282.

At this month's meeting, South Baltimore LLC presented a revised plan based on the smaller area: the number of homes was reduced from 416 to 363, and the amount of hotel rooms was cut from 500 to 250. Not changed were proposals for between 28,000 to 61,000 square feet of retail space and up to 146,000 square feet of office space.

At the hearing, Park Station backers wore badges with the word "Yes" on them. Opponents' badges read, "Not more than 4." (The building height limit in La Mesa is four stories; however, there is an eight-story senior complex in the city.)

The applicant proposed lowering the height limit to 85 feet (eight stories) and raising the number of residential parking spaces from 1 to 1.25 per unit (454 stalls total). Commissioners took no action on those proposals and didn't comment on a remark about the Legion property.

"We're committed to helping them spruce it up," said Sherman Harmer of Urban Housing Planners, the project development manager.

In an interview after the hearing. Harmer said, "We feel like we offered some major concessions." He anticipated that the council would hold a hearing on the plan in one or two months. Asked about plans to "spruce up" the Legion property, Harmer said the applicants "will have specifics" at the hearing.

"Our property doesn't need sprucing up," Guccione said in an October 2 interview. He didn't attend the meeting. Of the outcome, he said, "I think it's the smart thing to do. It was way too big for such a small area. Most of the membership agrees."

So the hotel will be expensive or will it be another dirtbag druggie magnet? Will the 'homes' (read condos) be reasonably priced or not? What stores will be in the lease space? How will all this commercial space affect the downtown merchants? What is the traffic control plan? The traffic in that area is a mess and this will not help unless a major rework of the EC Blvd, University Ave & Baltimore streets. There are three signals now and it slows traffic to a crawl. The area is blighted for sure but is this an improvement? Also the FD and PD are right there and the FD uses the aforementioned streets to get to emergency calls. I think the project as now proposed is going to create more problems then is solves. In any event follow the money and you will see who is in the developers pocket.