Chance meeting with a local leads to the unexpected. 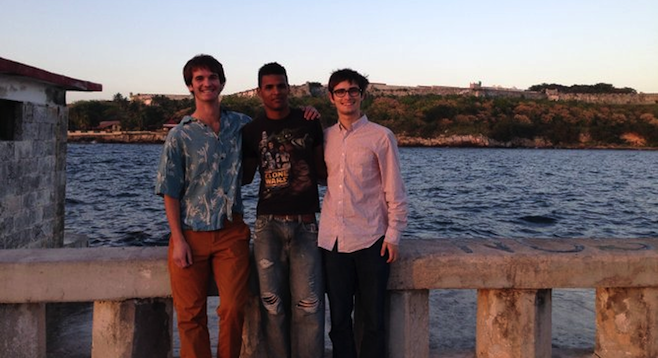 I was sitting on the sea wall with my friend Ben, watching the sun set over Havana Harbor, when I smoked my first cigar. And my second. And my ninth.

During our sunset routine on our fifth day in Havana, a young man walked up to us at El Malecón and asked politely, “¿Tienen fósfero?”

He looked to be about 25, with dark skin and a mohawk topped with tight jerry curls. We gave him our lighter, and before he sparked his cigarette, he asked us causally where we were from. One thing I quickly noticed about Cubans is that they're extremely kind and outgoing, especially to foreigners. Mostly they were looking to score a few pesos off a tourist, but no small share just wanted to make friendly conversation.

As best we could in Spanish, Ben and I explained that we were American students in Cuba, legally, on a student visa. In spite of almost 60 years of Cold War animosity between our two nations, Cubans were always excited to be meeting such a rare and illustrious enemy, and León was no exception.

After we introduced ourselves, the conversation rolled on in a jumble of Spanish and English for almost 20 minutes, propelled by our curiosity and León’s excitement. We told him we’d seen great art in the city.

First we went to El Museo de las Bellas Artes, which displays fine Cuban art that can be seen nowhere else in the world, and is a must for any visitor. After, we saw José Rodríguez Fuster’s whimsical, drug-induced ceramic testaments to the power of love, imagination, and the Castro regime.

Unimpressed, León replied, “Have you seen the real Havana?” Taken aback, we said no. He offered to show us.

That’s a proposal every traveler dreams of! Ben and I were beyond excited. We arranged to meet León same time, same place tomorrow and looked forward to a glimpse of Havana we wouldn’t see on our state-sponsored tours.

The next evening he took us on a three-hour walking tour of Havana Centro, a part of town not on the average tourist’s itinerary. Boys kicked soccer balls through the cracked streets, mothers yelled at their children from colonial iron balustrades, and young men leaned on Eisenhower-era Fords and flirted with passing women. When we got to Havana’s Chinatown, León pointed out the theatre where he watched Chinese cartoons when he was a kid.

After eating at a paladar, or small family-run restaurant (one of the only opportunities for private enterprise on the island), we took another walk on El Malecón. We’d talked about girlfriends, school, and travel stories, but Ben and I wanted to shift the conversation towards some of the big questions we had Cuba. At first, León was hesitant. He deflected a question about the Cuban 5, agents of the Castro regime who were controversially arrested in Miami for espionage and murder and given sentences varying from 15 years to life, by saying there were too many people around. After we walked a bit down the seawall, he told us, quietly, that he thought the men were most likely spying on America, but that the sentences seemed based more on politics than on evidence. It was a centrist and reasonable opinion that both Ben and I agreed with, but León could only repeat it in relative privacy. Afterwards, he sighed and said, “Here, there’s only liberty for you.”

We kept talking about relatively controversial topics – Che’s involvement in executions at El Moro, Cuba’s sad human rights record, the United States’ completely indefensible embargo – for most of the night. Once, in the middle of explaining his opinion on wages in Cuba, León suddenly started talking about ice cream. Looking around, we noticed a uniformed police officer walking towards us. He clearly censored himself at least three times in those four hours, but there must have been much more left unsaid than we could have ever noticed.

At the end of the night, we sat where we had met him earlier that evening and smoked cigars that he had bought us for the local price (96% off!). We thanked our new friend for teaching us Cuban slang, how to hit on the señoritas we’d met in the streets, and giving us some insight into the real Havana. We said we hoped to see him on the La Malecón again before we left.

Right as we turned to go back to the hotel, he left us with one more bit of local knowledge: supposedly, if you throw your cigar butts onto rocks in the harbor, bats will pick them up and smoke the leftovers. We tried this after every subsequent sunset cigar, but we never once saw a bat, and we never saw León again.

What a great experience Will! Thanks for sharing a snippet of your travels. Looking forward to seeing more. -Mr. Kim