Hardship south of I-8, cont'd 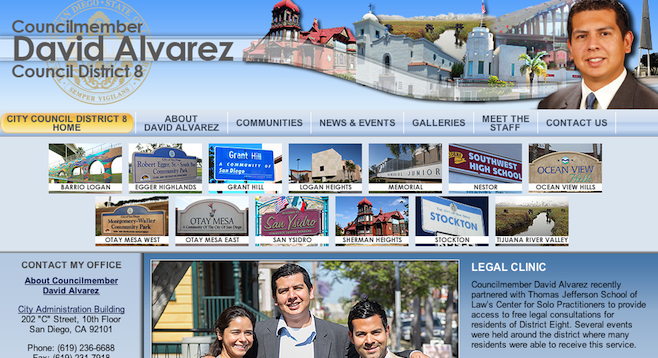 Alvarez explained that Larsen Field will receive more lighting systems and a location has been found for a new San Ysidro Public Library along Beyer Boulevard. At the San Ysidro Port of Entry, community members effectively convinced the federal government to build a new pedestrian crossing by the outlet malls, which is expected to open in 2016.

Joining Alvarez were Ali Alaeipour, project engineer for the City of San Diego, and Larry Thornburgh, the city’s consultant from Nasland Engineering. They provided details about the old Otay Mesa Road. The current roadway has no sidewalks, and children must walk to school in the dirt. The city plans to extend and realign 3700 feet of road. They will also add bike lanes, sidewalks, guardrails, storm water facilities, and street lighting.

Community members voiced frustration when Alaeipour described the 22-month-long project. Bertha Alicia Gonzalez said that, during construction, parents from San Ysidro will be forced to use the freeway when taking their children to school.

Thornburgh answered, “It’s a very long project and unfortunately there’s just not a lot of space out there for a contractor to build the road. We thought strongly about keeping two lanes open, but it would just take too long because they couldn’t ever be doing any work; they’d be always setting up traffic control.”

Community member Aurora Rio Clark asked, “Are we keeping in mind the real situation of the community? A lot of our parents don’t have transportation. In some cases, some of the students are living with their grandparents. There is no way they are going to be able to climb that hill.”

Another community member said, “I just was wondering if there has been any conversation with Sweetwater High School District to see if they could possibly have a bus that would get people up the steep hill.”

Alvarez asked Manuel Rubio to address the question. A representative of the Sweetwater Union High School District and resident of San Ysidro, Rubio said, “The Sweetwater Union High School District — throughout this entire process, the 12 years that the San Ysidro High School has been open — made a commitment to providing bus transportation to any and all students in the San Ysidro community who want it or need it, without cost. We as a district provide over $700,000 annually in transportation costs just for San Ysidro High School. We run more routes for one school than we do all of our other schools combined. That commitment is still there.”

Alvarez kept his presentation positive, but in his newsletter—passed out to the audience—he conceded that the recently approved mayor’s proposed budget fell short. He wrote, “I can’t help but notice that the neighborhoods that I represent are receiving less than 2 percent of that funding.”

Mr. Alvarez - I have been and continue to be a staunch supporter. I have resided I n this community (south of C.V.) for 40+ years now and you are the best representative we have had. I appreciate your candor and have to wonder if the lack of funding is due to demographics. I am very knowledgeable regarding the issues that surround Sweetwater - the District has failed to look out for the students who have to walk to school on extremely dangerous roads. Broken promises - not new to SUHSD.

If Mr. Taylor is one of the concerned parents, I would recommend that he and other parents attend Board meetings and voice their concerns. One thing Sweetwater detests - publicity. You want your children dealt with equitably - show up, stand up and speak up. You all pay taxes, that should mean something

Is there any chance that a task force from the Sweetwater school district, the city of San Diego, the county and the engineering company can get together and figure something out?

A shuttle system, perhaps, as a temporary measure?

Eastlaker,what a great idea. But they do need to go to the board mtgs.and get a commitment from the board,with Mr.Alvarez.

The community needs to organize and go to the city council meetings to protest. David Alvarez can't do it alone. Call his office (619) 236-6688 and let them know so they can plan to get an interpreter, if necessary. His office speaks Spanish.

On Monday October 20 they meet at 6pm. Take the trolley.

City Council meetings are held Monday and Tuesday of every week except during scheduled Legislative Recesses. The meetings can be watched on CityTV - Channel 24 on Cox Communications and Time Warner Cable within the San Diego City limits or via live webcast. link text

I called Alvarez's office. Gabby the young lady that answered the phone said the project is fully funded and the work will start in the spring of next year. Too cool!

I'd better clarify, the road to the school portion. The rest will take much community action and planning. Hopefully the community is up to the task.