Misogyny and sexism in the hipster blender. 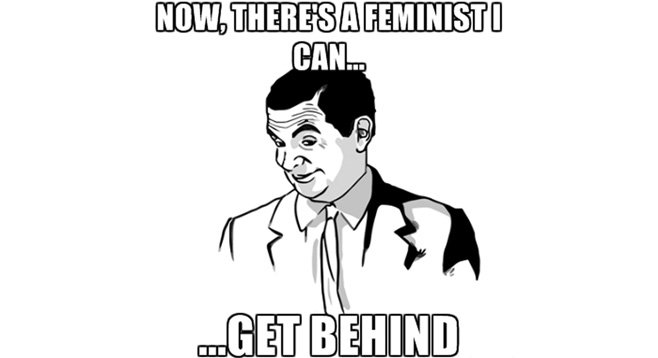 How about that Emma Watson? Her UN feminism speech impressed me. I’m a 28-year-old white male, working in the graphic design field. In my circle for friends, most of whom would I guess be called hipsters, gender inequality doesn’t appear to be much of a concern. In fact, it’s something I rarely consider. I haven’t observed any real-world examples of sexism in my own recent experience. I think I have an open mind about the politics of male-female gender disparity, but since it doesn’t seem to be a real problem in my world, I tend to wonder, has my generation “closed” the gender gap?

I snicker over ironic circumstances as much as the next hipster, and you have to admit that there are boatloads here. Emma Watson, successful actress and now UN spokesperson for gender equality, delivers a memorable speech designed to redirect discussion back toward the radical idea that women are people, who deserve to be treated as such.

What’s the message that many seem to take away?

When it comes to sexism, we hipsters are over it. We believe in a modern world, where womanly women and manly men enjoy differentiated equality; a separate-but-equal world of sensitive lumberjacks and empowered princesses; a Mad Men-themed paradise of voluntary domestic bliss where women embrace traditional femininity from beyond the squashing reach of the conventional patriarchy. Call us post-feminism feminists who see the highly politicized debate of the mid-20th-century Old Guard as unnecessary, and, frankly, a bit uncool.

Maybe this means the gender gap is closed or closing in our corner.

Or, it could just be more hipster sexism.

Yup, that’s the misogynistic version of hipster racism, whereby it’s okay to go on hating women, as long as it’s done ironically. Think of that “Blurred Lines” music video and its message of, “LOL, women are ‘whores,’ right? Jk, jk.”

But, here’s the thing: Is that, strictly speaking, bad in the same way as old-school “women belong in the kitchen” sexism? A big part of Emma Watson’s argument is that ideas of feminism (which she defines as, “The belief that men and women should have equal rights and opportunities”) are sullied by “man-hating,” “isolating,” and “unattractive” sentiments. Maybe the same ones that push hipsters away. It’s only with a mellower, more practical understanding of equality that we can arrive at same, by actions of solidarity between men and women. Watson’s speech tacitly questions the assumptions that behaviors treating women as women are wrong by virtue of their separating effect, that equality can only be achieved by forcing very different people into very similar boxes. Interestingly, many people understand feminism, and any other push for equality, in those terms.

In a sense, Watson proposes that men and women face different issues, and that the problem may not be with their differences — it’s in twisting those differences into something dark and spooky that hurts women and privileges men. On the surface, it appears that hipsters are finding ways to reaffirm the freedom for men and women to be different and equal, because we know that separate but equal doesn’t work.

So, while Emma Watson urges the world’s men and women to unite and stamp out gender inequality, there’s a chance, albeit a dubious one, that some inkling of just such a force is already at work among the hipsters of the 21st Century.