Lacy to the rescue 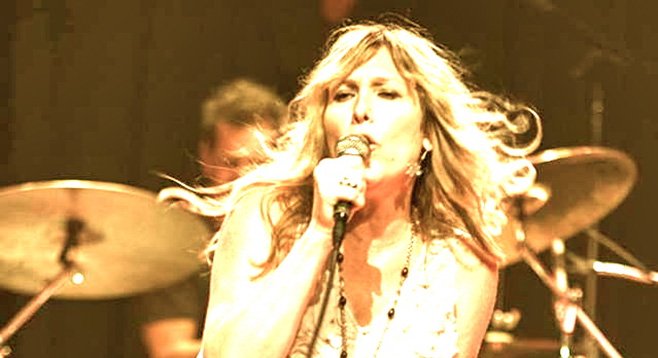 “For the past four or five years, I’ve done a lot of charity shows.” Country-rocker Lacy Younger works on an iced decaf and brings a visitor up to date on her career. In jeans and a T-shirt, she wears Mexican silver earrings in the shape of the cross. A delicate vine tattoo wraps itself around her left bicep; another loops around her wrist. Raised in Point Loma, Younger lives in Normal Heights. She says her real name is Lacy Waldemar. She does not look even close to her 51 years.

“In 2008, when my last record deal collapsed, I freaked out. It was a three-record deal. We only made one of them,” titled Still Wild. “When the economy tanked, the label downsized. For a couple of years, I was pissed off and bummed. I couldn’t get it going. I almost lost everything.” Younger prayed for resolution. “And right after that, I thought of this woman — she heads a charitable organization called Makua. It’s Hawaiian for ‘family.’ She just popped into my mind. And right then, I knew I needed to focus on someone else instead of me and my problems.” The 2014 San Diego Music Awards nominee for Singer/Songwriter of the Year’s next such benefit will be with Temple of the Dad as part of Race for the Cure.

“I’ve been to Nashville many times. I started going there when I had a production deal with David Chase. He made a lot of country records. At the time, Faith Hill was his receptionist. She had a sweet voice. I asked why he wasn’t recording her. She’s too shy, was his answer.” Younger bailed out of the deal to have a baby. “And one night, I’m on the couch breast-feeding, and I turn on the TV to watch Nashville Now, and there Faith was. I cried.”

Lacy Younger and Temple of the Dad

After the maternity break, Younger won the Jim Beam international songwriting contest. “That brought me back to Nashville. I was offered another deal, but I took one back in Los Angeles instead because by then I was more rock and roll. The only other guy on the label was Leon Russell...and some rap guy whose name I don’t remember. I had a number-one hit in Denmark. People still know me there. I have a big following on the East Coast, too.” Younger likewise has a fan base in Germany. “I’ll be in the U.K. at the Lancaster Music Festival in October.” But, frustrating, isn’t it? Being an almost-ran in the eyes of the music industry? “Until I’m dead,” she says, “I’ll write songs and play music.”

Just recently heard Lacy for the first time and was impressed - I had no idea about her many-year background, so this was an engaging read. She seemed to come out of nowhere for this year's SDMA Best Singer/Songwriter nominations, as did Sierra West (who just closed a deal to have her song “Hold Your Fire” included in an upcoming episode of ABC TV's Resurrection). It's been a very, very good year for new music in this city --