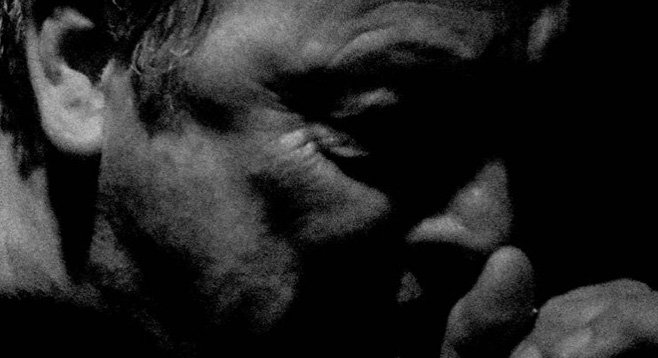 “I find most books of poetry suffocating and stifling,” Gary Heffern emails, “so it was important to me to add all the artwork and pictures in order to allow the reader some time to breathe, to contemplate the words, and then the visual artwork. I think it completes the story.” The Penetrators frontman has lived in Rovaniemi, Finland, a small town about six miles south of the Arctic Circle, for several years. He checks in with the Reader about his new volume of poetry, Unholy Dreams, now available on Amazon.com.

Heffern says the impetus came from Chris Eckman of the Walkabouts, “telling me for years that I should publish a book of my writings. So [San Diego musician and school teacher] Ray Brandes and I talked back and forth about doing a book, and he nudged me along and offered to do the layout.” Heffern says he chose the art and photos to accompany specific pieces. “I think I drove Ray crazy in the process. There were hundreds of hours put into the layout alone. But he made my vision a reality.”

In the 1970s, Heffern was the singer of Monotone and the Nucleoids. After, Heffern gained national prominence with the Penetrators, a punk band. But if Iggy Pop hadn’t randomly handed Heffern the microphone at a show once, would he have found a future in rock? No, not the first time around. “But when Iggy did it a second time, my fate was sealed. But years before I was in the Penetrators, I met Tom Waits, who was playing at SDSU’s Backdoor. I was waiting in line with a six pack of beer, and he came walking up, and we sat there and talked and drank the beer.” Heffern showed Waits some of his writings. Waits liked what he read and gave encouragement, told Heffern to keep writing. “So I did.”

Pearl Jam’s Eddie Vedder claims the Penetrators were an influence; has Heffern sent him a book? “Oh, come on. I don’t think we really influenced him at all. He just saw us play at a dance at San Dieguito High School.” Heffern says he’d like to do a reading in San Diego (he’s been back a handful of times for Penetrators reunions) with the symphony and gospel singers accompanying. “Yeah. Now there’s some punk rock for you.”

Hopes for Unholy Dreams? “That the truth will set me free and I can come back to the States with my tale told and my head held high. Buy the book and read it,” he says, “and bring me home where I belong.”