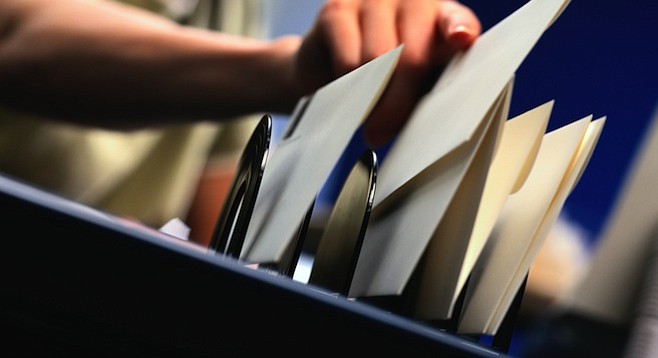 Regarding your cover story about the bus driver Gamal Mohamed Hamouda running over the cyclists and committing vehicular manslaughter against rider Udo Heinz that left his wife a widow and his children without a father.

Where is the follow-up about what happened? Did he kill those people deliberately? Was he texting or otherwise distracted? Was he arrested, imprisoned, or deported? Did he at least lose his license? The writer thinks that’s not important to include?

I used an amazing tool called Google to research the story:

“San Diego’s NBC 7 ... reports — or strongly implies — that the bus driver was illegally using a handheld cell phone at the time of the collision.”

Injured cyclist John Edwards’s Attorney Richard Duquette said, “The bus driver clearly had an object in his hand up to the right side of his face and or in front of him at the time just before impact.”

“Traffic records indicate that driver Hamouda was caught speeding in his personal car.”

“He pleaded guilty to driving 70 mph in a 45-mph zone and 78 in a 65-mph zone, as well as a rear-end traffic accident. Gamal Mohamed Hamouda was placed on administrative leave after he killed the bike rider.”

Hamouda was investigated by the Naval Criminal Investigative Service because the killing happened at Marine Corps Base Pendleton.

Is he now in federal prison? Is he still driving a bus? Driving anything? Who knows? Who cares? Not the Reader story writer Maryann Costronovo.

I'm currently going through some very difficult, emotional times in my life, including breaking up with my boyfriend, and I just read the article about Udo. I couldn't stop crying. It was written in such a manner that you quickly became aware of the closeness and love among Udo, his wife, and his children, and the horror of his death.

The most horrible and shocking part is that the bus driver just kept driving straight ahead instead of going around the three bicycle riders, which they say is very common on roads in Camp Pendleton. It may have been on purpose, but the article didn’t say a word about the bus driver. Why didn’t he see them?!

The two photos from the bus clearly show the three cyclers in front of the bus riding along the side of the road, and one second later, they’re gone! And the bus driver kept going? He didn’t see the cyclers, and he didn’t feel any impact whatsoever and/or hear any noise when he ran over three human bodies and three bicycles, killing one person and seriously injuring the others?

What can you tell us about the bus driver? Was he drunk? Perhaps fell asleep? Is he being punished? I would very much like to know what his story is and why he didn’t see the riders. Hopefully he wasn’t texting, or on his cellphone!

We must all be thankful that we were not on one of those bicycles or part of any of their families.

Before You Label Me a Racist

I just finished reading “Udo Was Gone.” Besides seeming to be a muckraked article, it ends without a proper conclusion.

The way this article leaves open a fatal incident leaves open the possibility that this act could have been deliberate on Gamal Mohamed Hamouda’s part. Clear day, no traffic (other than the bus), and there is evidence in the photo that the cyclists were in clear view. So, with the high probability of Mr. Hamouda being a follower of Muslim idealogy coupled with deductive reasoning, it is entirely plausible that seeing three Caucasian men on a U.S. military installation, who were in high probability Marines, was just too good an opportunity to pass up for someone following the dictates of Muhammed.

Before you label me a racist, let’s remember that Islam is not a race, and that the U.S.A. is at war with terrorists whom are predominately (if not 100%) Muslim. As a long-time reader of this magazine, I wonder if anyone there has the stones to follow this up. Or will you be like the rest of the American forces today — whose supposed reason for being and rallying cry is that the people have a right to know — and turn a blind eye and a deaf ear?

After reading the story “Udo Was Gone” I have two observations to make.

Number one, somebody with a name like Gamal Mohamed Hamouda never should've been admitted into the United States and given a job here. We can thank the Kennedys for that. They got the immigration laws changed around 1960-’61. So, thanks a lot, Kennedys. Stop letting all these Mohameds into the country.

Number two, it’s stupid to ride a bicycle on a dangerous highway, hunched over and looking down at the road, unaware of one’s surroundings.

I rode a bicycle in my Midwestern hometown until I was about 19 years old, and I rode it sitting upright without wearing a silly helmet. No earphones, no radio, nothing like that. I rode it sitting upright and looking around at my surroundings. I rode on city streets and occasionally out on the highway. One thing I did was ride facing traffic. That’s probably illegal nowadays.

The bus picture of these three cyclists right before they were hit shows them going along hunched over, looking down at the handlebars, not aware of any traffic around them. The one at the back of the group is actually a lot further off the side of the road then he should have been. The two front ones are very close to the edge, but the back one is pretty far out into the road.

If you’re gonna ride a bicycle don’t think you can share the road with a lot of dangerous traffic. Sit upright and look around at your surroundings.

I read your article, “Musical Cars,” on the frustrations of parking in San Diego (City Lights).

One thing I find very challenging is the lack of alertness of drivers, and how they park. I live in the beach area and people will park three feet from the end of a driveway or red zone versus pulling up to the end of it. Many times, parking in that manner will deny one or two other cars on that one stretch of parking.

I wish the City of San Diego would evaluate the parking situation better. Some streets in Ocean Beach are incredibly wide and could possibly have angle parking and allow for more parking spaces. Also, perhaps painting designated parking spots would help drivers be more alert to how much space they are consuming.

As housing and rental prices increase, and more construction continues, we will only see more and more people occupying the same dwellings, and more cars will be on the street. We need the City to evaluate how to make better use of the space we have left.

Any John, Dick, or Jerry?

You have an article about global warning with Jerry Coleman’s name and John Coleman’s photo. Who edited this insert?

Jerry doesn’t need any more accolades and John, obviously still with us, is more apt to know about global warming.

I’m a little puzzled about the Hipster column (“Shame Cycle,” Ask a Hipster). There’s a picture of some goofball with short shorts, a baseball cap, sandals, and long stockings that come up just below his knees. The question is something about cool people not wearing socks with sandals.

Well, now I wear socks. The socks come up a bit above my ankles and I wear them with shoes. I don’t go around with gumba flip-flops or hippie sandals. I wear shoes, like a grown-up. With socks.

Elliot Hirshman, president of San Diego State University, is to be given a raise of $12,000 when his total compensation is already $400,000 (News Ticker: “Fat Pay Boost for SDSU’s Elliot Hirshman”).

When we consider that higher education in America is simply a legalized form of organized crime, Mr. Hirshman’s inflated salary bears comparison to that of Don Vito Corleone.

What Would Jerry Do?

Jerry [Schad] would have never done this to us. But, then again, Jerry wouldn’t have let us know if mountain biking was okay at a particular location.

In this instance we were poorly directed to an area that was open to bikers, just not the whole thing. I’m talking about Kelly’s Ditch from the October 9 issue (Roam-O-Rama: “Kelly Ditch Trail”). Nice ride, probably in a year or so. Not much of a hike. God forbid you are an equestrian. Impassable at least six times due to recently downed trees, forcing us and a few hikers to “conveyor” our bikes in order to pass through.

It appeared that recent upgrades opened this trail, but more maintenance is due. After slogging up and over North Peak, we found the last mile, the actual “ditch” named after some lucky soul named Kelly, closed to bikes. Not even the folks at the trailhead at Heise were kind enough to inform us. Check that one off the list for a while.

Sounds like you had a pretty bad experience, and we are sorry for that. When the trail was checked for this article, there were no obstructions and no sign stating Closed to Bikers. We recommended the shorter hike and not a bike ride, although at the time the area was open for mountain bikers and equestrians too, and so we indicated that.

The area is dense with dead trees, mostly pines and black oaks, killed in the Cedar Fire. When the wind blows, these can fall and sometimes they fall across the trail. The Forest Service doesn’t have the manpower to monitor their part of the trail on a daily basis. That is why the article recommended a hike that was largely confined to the part of the trail within the County Park but discussed the full trail as a possibility for the more adventurous.

Obviously, you are among the more adventurous. Kelly Ditch is a challenge, but manageable for hikers. We appreciate your feedback and will incorporate your comments into the future Canyoneer guidebook to San Diego County.