The most American drink on the menu

Making something from nothing with the Rum Runner. 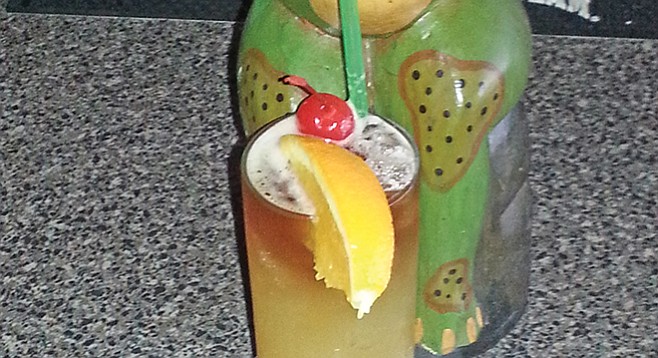 "A disaster in a glass.”

So says Kanai Williams, the Salty Dog’s front man behind the bar, about this Imperial Beach joint’s premiere chockablock chug-a-lug — the Rum Runner.

“And that’s probably the only reason you’d order it,” he adds with a laugh. “It’s a college frat thank-you-very-much-and-have-a-good-day rum punch.”

Actually, if truth be known, this Category 5 imbroglio of juices and spirits, Williams admits, originated on a back shelf of booze on a slow day in Key West.

“There’s a bar I worked at once down in the Keys that always ended up with a lot of dusty bottles in the off-season,” he explains. “So we’d always have to find a way to mix them together and make them taste good because otherwise your money is locked up. You got to get the money out of the bottles.”

As part of the Salty Frog’s “Drink the World” international cocktail menu, Williams says, the Rum Runner is by far the standout Yankee representative.

“It’s definitely the most American drink on the menu,” he says. “And it makes sense. The Rum Runner is a matter of making something from nothing. It’s a melting pot of whatever you got; it’s a rum stew.”

It’s also the menu’s class clown, Williams says, noting the Rum Runner’s affinity for eliciting laughs among patrons — both before and after consumption.

“Look, it’s colorful and not taking itself too seriously,” he says. “It’s not a hoity-toity cocktail. You got banana. You got raspberry. You slip on a banana and you give someone a raspberry — that’s a clown.”

As for taste, it’s exactly what you’d expect, Williams says.

“It’s very sweet; you can’t get away from the sweetness of it,” he says, “but it’s also got a little kick to it, and the dark rum float takes some of the edge off that sugar buzz, that initial, ‘Good God, that’s a lot of sugar!’”

In a Collins glass or pint glass filled with ice, pour white rum, banana liqueur, and orange and pineapple juices, top with a float of dark rum, garnish with orange slice.