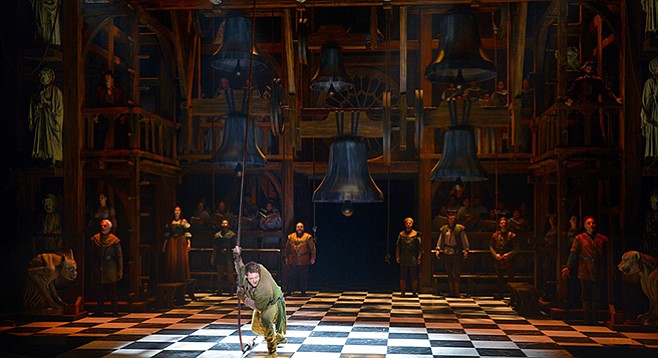 The Hunchback of Notre Dame

The Phantom meets Les Miz on the belfry of Notre Dame.

Victor Hugo titled his 1831 novel Notre Dame de Paris. When the English translator changed it to The Hunchback of Notre Dame, Hugo blew a gasket. He hated how it reduced the book to a single character. One shudders to imagine how M. Hugo would react to the musical at the La Jolla Playhouse.

The novel is about “ANATKH,” often translated as “fate.” It follows the intersecting paths of a host of characters: the cursed gypsy Esmeralda (and her father and mother); Archdeacon Claude Frollo (who has an Inquisition for a brain); the egocentric womanizer Captain Phoebus; deaf Quasimodo the “half-formed” Hunchback; Pierre Gringoire, the book’s protagonist, a penniless poet who marries Esmeralda but cannot touch her. And also her genius billygoat, Djali, able to count out sums and maybe glimpse beyond the pale.

Their combined fates build inexorable frictions. Esmeralda loathes Quasimodo, can’t stand to look at him. She falls for the Captain, but he dumps her for an aristocrat (he “came to a tragic end,” writes Hugo, “he got married”). No two of them ever match up. Except for Quasimodo, each loves for the wrong reason. The book’s a series of violent collisions, but so well written you wish they were otherwise.

From a contemporary perspective, the story’s also about Esmeralda’s limited choices: a rabidly repressed Archdeacon, a randy, faithless soldier, an otherworldly poet, and a hideous beast with a heart of gold (and the only one who doesn’t stereotype her as a gypsy). To Esmeralda, each is a kind of monster. 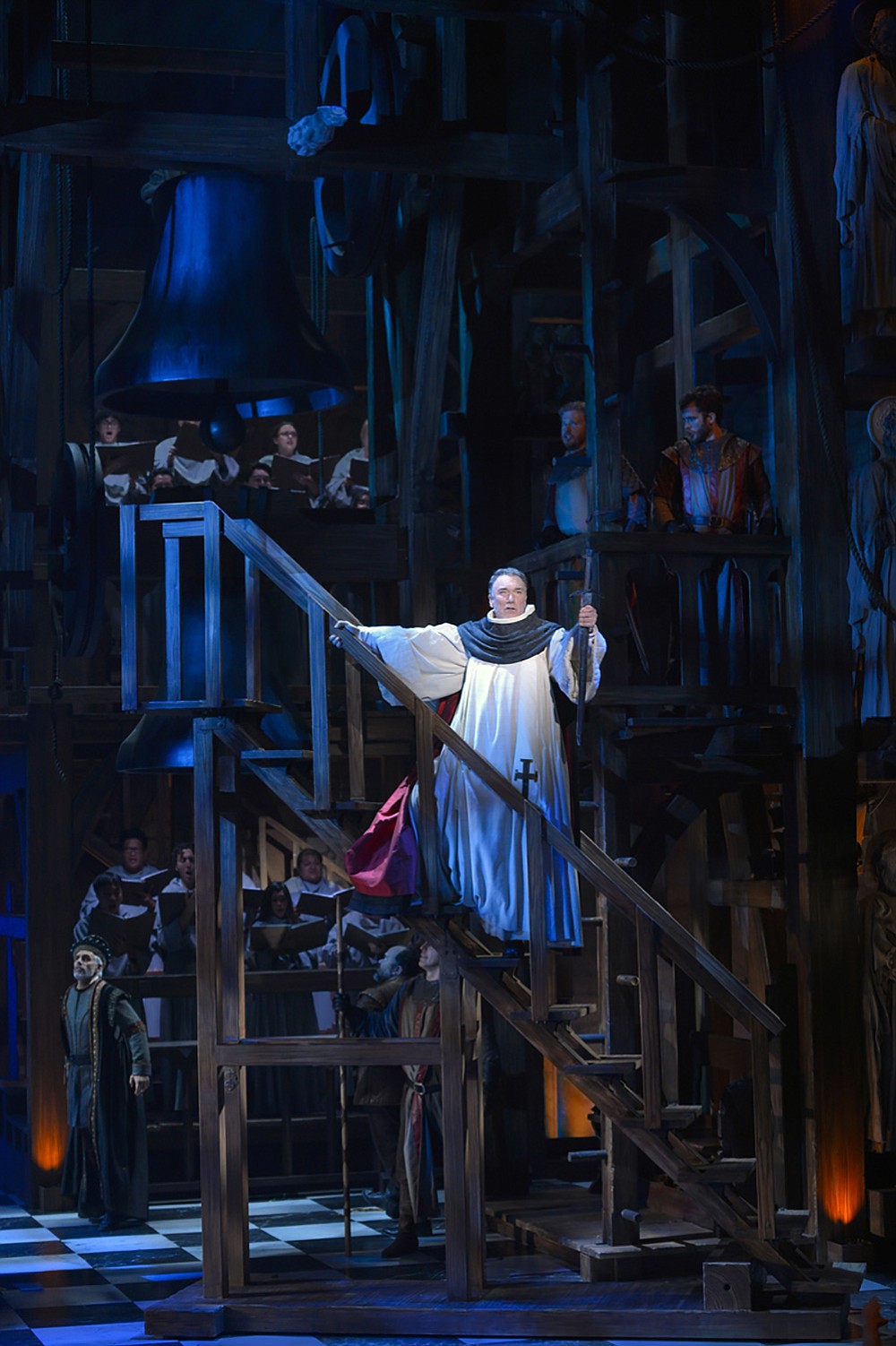 The Hunchback of Notre Dame at La Jolla Playhouse

For the musical, based in part on the popular movie-cartoon, Hugo’s novel gets Disney-ized.

Pierre, the protagonist, is out (I guess poetry doesn’t play?), as is Esmeralda’s mother, and the goat. Captain Phoebus is a comic figure, a Real Nice Guy beneath his bluster. And Quasimodo’s a cutie-pie. He’s only intermittently deaf and can sing up a storm. Plus, he and Esmeralda become brother and sister. She seals the bond with a kiss.

Esmeralda sings “God Help the Outcasts,” like Eponine’s “On My Own” in Les Miz, only the subject is plural.

And the Archdeacon? He’s the driven Javert in Les Miz. Both have a hellfire song (the Archdeacon’s is called “Hellfire”). And both fall in the end, though Javert descends vertically and the Archdeacon laterally, upstage.

The musical consistently dulls the novel’s edges. Instead of clashing personalities and the threat of the first French Revolution, the novel’s watered down to the Archdeacon vs. the world and yummy, why-can’t-we-just-get-along, mush.

Which is probably why this Hunchback of Notre Dame will sell and sell for years.

And with this cast. Led by Ciara Renee (Esmeralda), Patrick Page (Frollo), and Michael Arden (Quasimodo), and backed by Brent-Alan Huffman’s top-notch orchestra and the Sacra/Profana choral ensemble (over 30, dressed in gray monk’s habits), everyone sings up a storm.

The songs don’t offer much individual, take-home value, but the overall score has an architectural structure. It’s almost as if the intro song, “The Bells of Notre Dame, runs throughout, like a frame, and the others, from high-ceiling’d vaults to snarky gargoyles, are the building’s innards. Snatches of lyrics and motifs interweave; it’s like watching — nay, hearing — the growth of a cathedral.

The look has a double standard, however. This is story theater: members of the cast share some of the narration, an approach often used on a bare stage. But this is story theater with a budget. Alejo Vietti’s autumnal-hued costumes evoke 1482 in detail, but not the grime.

You could probably feed the 5000 with what Alexander Dodge’s set must have cost. A scaffold of massive timbers, with marble statues of haloed saints and kings, a glorious rose window, and one of the great design entrances in memory: the bells of Notre Dame float down from above — and are probably the actual size of the originals. But the set’s so epic it almost swallows the performers. It also betrays notions of a humble, story-theater approach.

Make no mistake, the production has a spectacular surface. But the musical’s all surface as well.

The choral sound was rich, all the musicians--instrumental and vocal--were excellent. Maybe they can put a little more into the storyline, or to be more precise, bring some of the storyline back.

The story wasn't as watered down as many Disney musicals. It wasn't aimed at 5 year old girls.