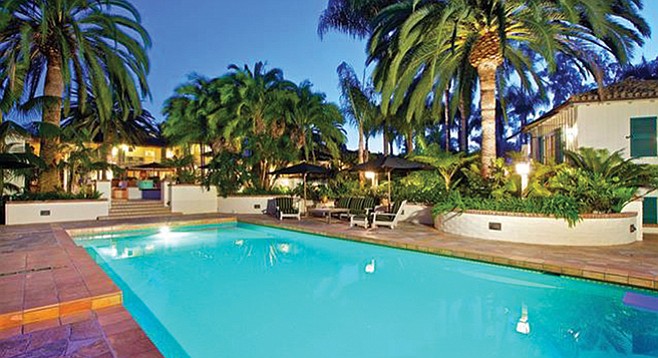 Casa de las Palmas, a sprawling, six-acre estate at 16270 Via de la Valle is located “within the most exclusive Covenant area of ‘The Ranch’” in North County’s Rancho Santa Fe community. In addition to the main residence, the property includes two guest villas, a cabana/gym, garage parking for nine cars, and stable facilities to accommodate up to six horses. In all, the estate comprises eight bedrooms, 14 baths, and over 16,000 square feet of living space. 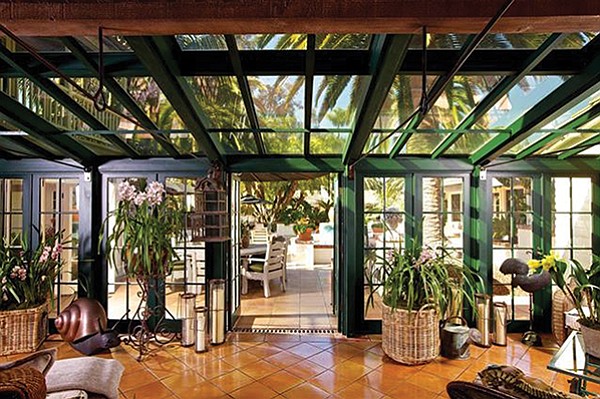 The main residence features six bedroom suites and an additional four baths, as well as an atrium with glass walls and ceiling, a 900-square-foot living room, formal dining room, and a chef’s kitchen with secondary dining area. Exposed wood-beam ceilings and high-end fixtures are featured throughout. The home also includes ten fireplaces and assorted built-in furnishings.

Outside, the main residence and other buildings surround “a spectacular 75-foot turquoise Italian glass-tile pool.” The pool’s cabana houses a gym, sauna, and two baths of its own. There’s also a catering kitchen for poolside parties. Other exterior features include “world-class botanical gardens, incredible waterfalls and Koi pond adjacent to a tennis court and Gazebo.”

The property is entirely fenced and gated, with two entry gates and another two service entries, one specifically for the horse barn. In addition to the nine-car garage there’s driveway parking for another 20 or more cars.

Purchase of the property also includes a social membership at the Rancho Santa Fe Golf Club, with access to the links and tennis facilities available at “nominal cost.”

Public records show the property’s current owners as Richard and Christine Nicholas. The tax records also suggest the lot size is closer to three acres than six, though it’s not uncommon to combine parcels into a single property to achieve more acreage.

The current assessed value of Casa de las Palmas is just $693,947, resulting in an annual property tax of $7535 — if the property sells for anywhere near its asking price, the new owner’s tax bill would more than double that sum in a single month.

The estate was previously listed for sale in October 2011, with an asking price of $19,500,000. That price was reduced to $15,500,000 the following April, then increased to the original price again in June. Failing to attract a buyer, the listing expired in October 2012. The home stayed off the market for two more years before being re-listed last month with a new asking price of $17,900,000, which remains unchanged to date.