Huế down yonder in Vietnam 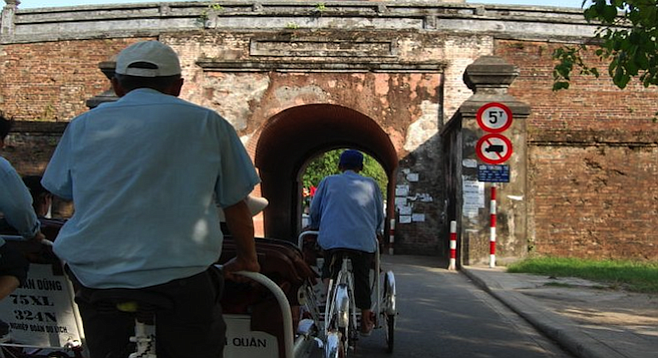 Stretching before me is an archaeological site straight out of Indiana Jones and the Temple of Doom. But this is no studio set; Y Khiêm Viện and Trì Khiêm Viện are the real McCoy. The ruins are located about five miles south of Huế, Vietnam’s capital from 1802-1945. 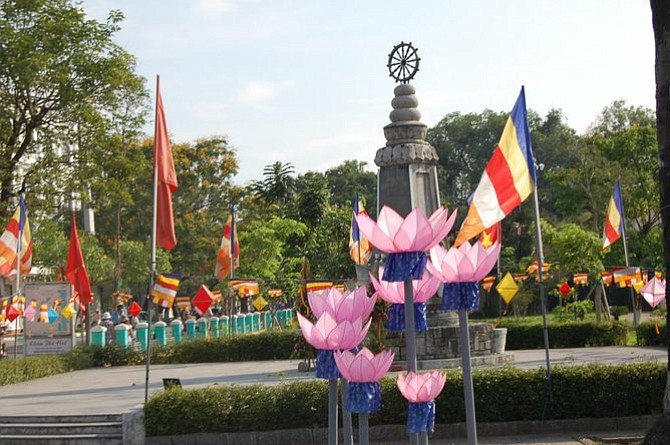 I’m inside the palace of the royal concubines – 103 of them, to be precise. Emperor Tu Duc’s courtesans’ inner sanctum is part of Tu Duc Tomb, a sprawling walled compound. Ironically enough, every structure’s name includes the word “Khiêm,” or “modesty.”

The Tu Duc Tomb complex, which covers a 29-acre expanse of pine forest in Thuong Ba valley, was built by the Nguyen dynasty from 1814 to 1931. The ruins include palaces, temples, courtyards, burial grounds and gates with curved, sloping roofs amidst tropical foliage. Passing through the Vu Khiêm entranceway you’ll glimpse Luu Khiêm Lake. Monet-like water lily pads drift near two pavilions, Xung Khiêm and Du Khiêm, where the emperor wrote, read and reposed. 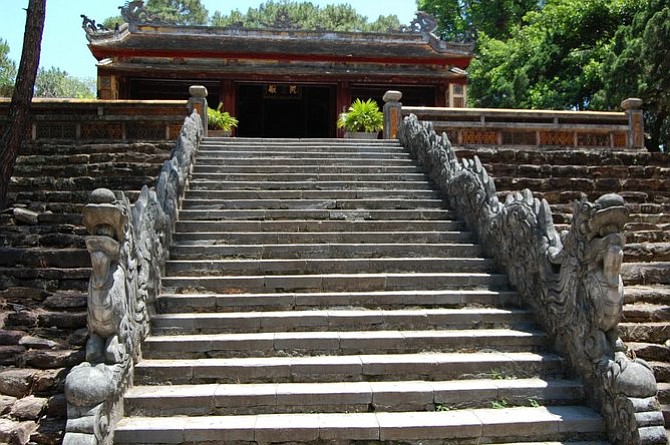 In the red-and-gold throne room, dragons – Tu Duc Tomb’s leitmotif – are emblazoned upon the walls and ceiling. Banisters hewn out of stone are sculpted in the shape of dragons snaking down 25-ish steps leading to a pagoda-like structure on the terraced grounds. Gargoyle-like masks and life-sized elephant statues protect rooftops and courtyards.

If Tu Duc’s tomb was fit for an emperor, La Résidence’s French élan was worthy of a governor-general. In 1930, a colonial-style mansion was built for the French Resident Superieure in Huế, in central Vietnam. From here Paris’ governor-general presided over France’s Indochina empire, which it had seized by the 1880s.

Part of that original structure remains as the Old Wing, a key ingredient of what’s now the five-star La Résidence, which was expanded, rebuilt and renovated in the early 21st century. Emulating French-era architecture, new wings were designed with high ceilings, arched hallways and Art Deco panache. 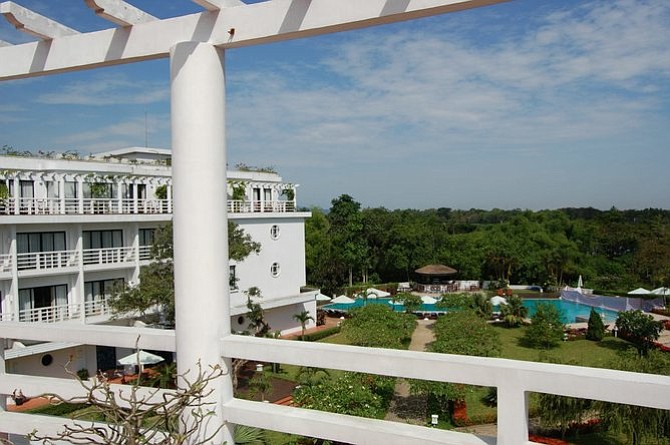 View from my verandah at Huế's five-star La Residence.

Eat, drink and be pampered

While its gleaming white, eye-catching exterior set it apart from Huế’s hustle-bustle in front, out back, the wings of La Résidence enclasp a manicured tropical garden, violet and jade lily pad pond, plumeria and palm trees, large saltwater pool with padded lounge chairs and thatched roof pool bar. The semi-circular, reddish-tinted Le Gouverneur Bar, just off the grand entrance and overlooking the garden, is a welcoming watering hole for parched throats.

Dining at Le Parfum is a gastronomic extravaganza, offering mouth-watering Asian and European cuisine on artistically designed plates, feasts savored by eye and palate. These culinary gems are overseen by Executive Chef Thua An, who – after years of experience in Bora Bora and New Caledonia five-stars – returned to Huế, his birthplace.

At Le Parfum, An renders delightful dishes, including deliciously sweet cream of pumpkin and coconut soup flavored with Vietnamese vanilla or roasted Nah Trang lobster with garlic butter, sautéed mushrooms, tagliatelle and pomelo salad. No Red Lobster this – it's the tastiest crustacean I’ve ever devoured, followed by coconut ice cream with fruit salad and Grand Marnier liqueur inside a coconut. As this outpost of elegance is part of the French Accor group, an extensive international wine list is available.

Lying face down on a table in one of seven spa rooms at Le Spa, I get a Swedish massage from 20-something Nhu. With a power belying her size, her strong hands dipped in almond oil, Nhu vigorously presses my shoulders and back, using long strokes and fingertips, relieaving stress. The skilled masseuse, who learned techniques and spa therapies in Hanoi and Huế, has practiced her art for eight years.

The luxurious 236-square-foot Resident Suite is up a twisty staircase in the Old Wing. Acknowledging the tropical climate, a ceiling fan is overhead; the canopy atop a four-poster bed is mosquito netting. Its top floor windows and verandah bestow sweeping views of the garden, river and jungle beyond.

You might imagine a colonial-era Resident Superieure languidly surveying his realm here, musing a la Mel Brooks: “It’s good to be the governor-general!”

Huế’s role in the War

But many Vietnamese disagreed. The day I arrived was the 60th anniversary of France’s May 7, 1954, military defeat at Dien Bien Phu. Propaganda hailing the Viet Minh victory punctuated Huế, where Ho Chi Minh attended Quoc Hoc High School, as did my guide Lan, whose mom was a Viet Cong nurse.

Located in the north of what was South Vietnam, Huế is south of the former DMZ. During 1968’s Tết Offensive, Huế was a brutal battleground pitting U.S. and allied ARVN soldiers against VC and North Vietnamese. Ferocious house-to-house street fighting lasted a month. The Battle of Huế epitomized “Uncle Sam[’s]… terrible jam way down yonder in Vietnam,” Country Joe sang in the 1960s antiwar anthem “I-Feel-Like-I’m-Fixin’-To-Die Rag.”

The combat was so fierce CBS anchorman Walter Cronkite flew to cover Tết, reporting, “If the communist intent was to take and seize the cities, they came closer here in Huế than anywhere else.” On Feb. 27, 1968, shortly after Marines retook Huế, Cronkite aired his famous broadcast urging a negotiated end to the stalemate. LBJ lamented: “If I lost Walter Cronkite, I’ve lost the country and we’ve lost the war.” Stanley Kubrick’s 1987 Full Metal Jacket depicted Huế during Tết. 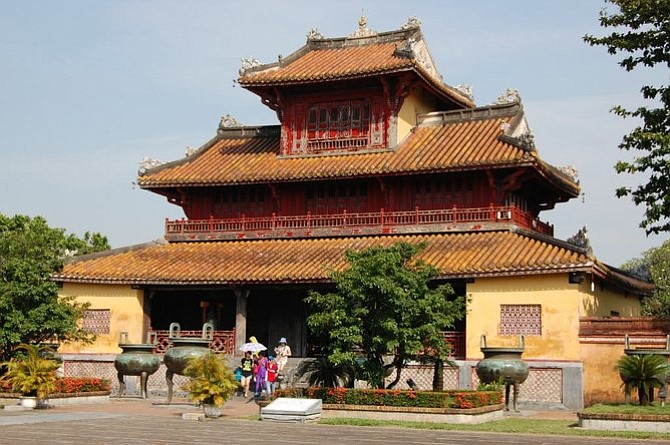 Much of Huế’s vicious fighting took place at the Citadel, a vast fortified, palatial complex the Nguyen dynasty built from 1805-1832. To get there I embark on a distinctly Vietnamese form of transportation, a cyclo (top).

Cyclos are similar to rickshaws: Passengers sit inside a wheeled, convertible-roofed cab attached to half a bicycle behind it. In this noble conveyance my trusty cyclo driver, Trần Văn Thảo, deftly navigates the streets of Huế, population 340,000, providing a cyclo’s-eye view of ’Nam’s motorcycle-dominated traffic. En route we pass giant manmade violet lotuses on sidewalks and floating serenely on the Perfume River, celebrating Buddha’s birthday.

We cross the Perfume River’s north bank on a flag-lined bridge bombed during the war, then rebuilt, and ride across another narrower bridge over a moat. A gigantic red Vietnamese flag with a golden star atop the Flag Tower flutters.

Dismounting, on foot we enter a tunnel-like gate into the awe-inspiring Citadel, a UNESCO World Heritage Site. Within the massive walls the labyrinthine Imperial City and, inside of it, the Forbidden Purple City or Tu Cam Thanh, where royal residences stood, unfold. 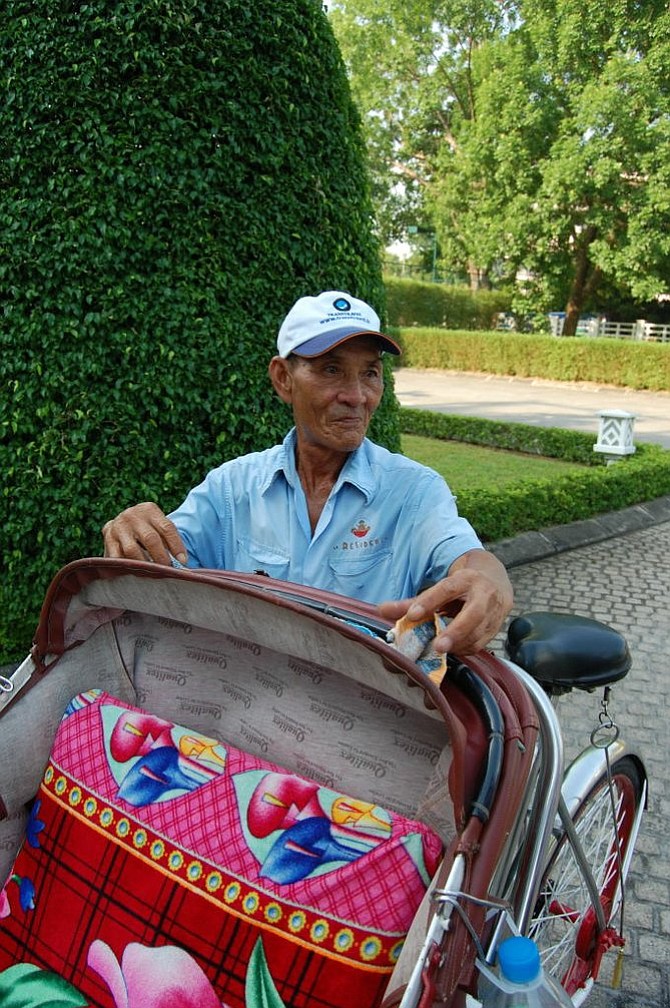 My sturdy cyclo driver Thảo was in the Viet Cong during the Tết Offensive.

Returning to our hotel, my driver thoughtfully slows down whenever I shoot celebrants honoring Buddha. Back at La Résidence, through an interpreter, I ask the short but sturdy gray-haired cyclo-ist, “What did you do during the Tết Offensive?”

With the inner confidence of a victor, but minus any braggadocio, Thảo replies: “I was in the Viet Cong.” I tell him that when I was a teenager I marched for peace, and he sticks out his hand.

“Thank you,” my pilot says. “You’re a good friend to Vietnam.”

Day Trip From Hoian To Hue and Day Trip from Danang to Hue is the most suitable day trip for travelers who would like to visit Hue City from Hoi An. Hue is an ancient capital of Vietnam under the last dynasty – Nguyen. Nowadays, Hue is famous for the World Heritage Complex with Imperial Citadel, Royal Tombs and sacred pagodas. The day tour to Hue City by private car transfer will offer you a chance to get the new experience about the history and culture of Vietnam in feudalism. In the morning, 08:00am TransferToHoian driver pick you up at hotel lobby in Hoi An. Depart to Hue, on the way stop to visit Marble Mountains – a cluster of five limestone mountains with many beautiful caves and sacred pagodas. Let’s do an exercise to conquer Thuy Mountains – the highest mountain with 151 steps. If you lazy, the elevator is a good idea. Continue to Hue, we will go over Hai Van Pass – Sea Cloudy Pass with 20km of length. Making a short rest in the top of the pass, we will admire the wonderful landscape of Da Nang City from 500m above the sea level. In the winter, you will have a chance to see the cloud climb over the mountain range. Also, you can use your hand to touch the cloud. Upon arrival Hue City, we will visit Tu Duc Tomb. This is one of the most beautiful Royal Tombs. Tu Duc Tomb is also superb example for Nguyen Dynasty’s architecture. Have lunch at local restaurant. In the afternoon, depart to visit Imperial Citadel – where 13 emperors of Nguyen Dynasty used to work and live. We will visit in turn of: Nine Holy Canon, Ngo Mon Gate, Court Yard, Thai Hoa Palace, The Temple and the Forbidden Purple City. Leave Imperial Citadel, we will drive along the bank of the romantic Perfume river. The last tourist attraction in the day trip is Thien Mu Pagoda – the oldest pagoda in Hue with more than 400 years old. In 2015, Thien Mu Pagoda was in top of 10 most beautiful pagodas in Asia. Transfer back to Hoi An. 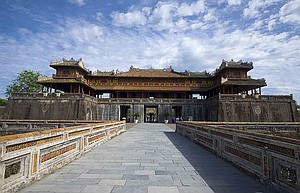