It had its beginnings as “Borrego Palms Desert State Park” 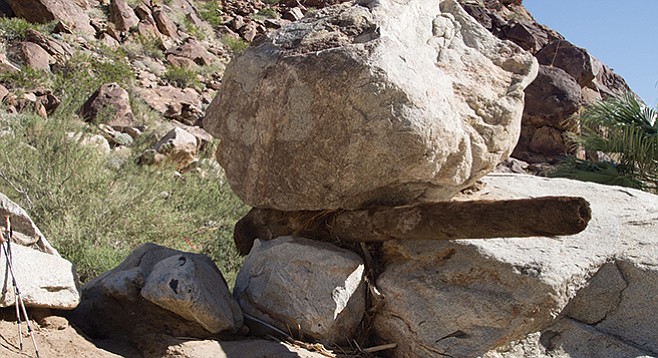 This is the most popular hike in the Anza-Borrego Desert State Park, and it is easy to understand why so many people are drawn to it. Dramatic desert varnished canyon walls rise high above en route to a clear bubbling stream flowing near a cool, shady oasis of native California fan palms. This palm grove was initially recommended to be part of the proposed California State Park System in March 1928 and officially became “Borrego Palms Desert State Park” in November 1932 — the first desert park in California.

During the wildflower season, there may be a profusion of colorful blooms that might include six species of phacelia, fiesta flower, indigo bush, apricot mallow, desert willow, Palmer’s locoweed, ocotillo, pygmy gold poppy, California fuchsia, Bigelow’s monkeyflower, honey mesquite, and many others. An added bonus may be a sighting of desert bighorn sheep (borregos in Spanish) that frequent the canyon but are not always easy to see.

There are two trails leading up Palm Canyon, the main trail and one known as the alternate. Both begin at the western-most end of the campground near a desert pupfish pond. Most hikers take the main trail going up to the first palm oasis. It is in the Palm Canyon flood plain where it is occasionally disturbed by flash floods, the most recent having occurred in the summer of 2013. Rangers placed red markers showing the way through some of the damaged parts of the trail, but as more people use the trail, these markers will become unnecessary. The 2013 flood was minor, compared to the one that occurred in September 2004, which not only destroyed parts of the main trail but also devastated many of the palms at the first oasis and destroyed parts of the campground. Both the palms and the campground were not much affected by the latest flash flood and have largely recovered from the devastation of the 2004 flood. Still, there are many testimonies to the awesome power of water during a flash flood, which can be noted along this trail.

Borrego Palm Canyon was home to a band of Kumeyaay Indians for a good reason. It offered shade, water, and plenty of resources for food, including mesquite beans, agave, and cactus fruit; and for shelter and bow-making, willows, palm trees, and ironwood. Creosote and sage provided medicinal use, and plenty of granitic rocks made it easy to grind seeds near the source of food. Look for grinding areas on rocks during the hike. Also, pick up an interpretive brochure at the trailhead that gives more information about the canyon and the Indian use of plants.

The canyon was named for the native Washingtonia palms that are a remnant from a cooler, wetter climate before the desert evolved in this area. Palm trees are predominately found in the western canyons of the park, where water is close to the surface. Palms must have their “feet” in water to survive in desert heat as they have very large leaf surfaces that are constantly a source for evaporation.

The “tourist” turnaround at the main palm grove offers plenty of water and shade. Exploration above the main grove will lead to other groves but the trail becomes very steep with plenty of boulders. 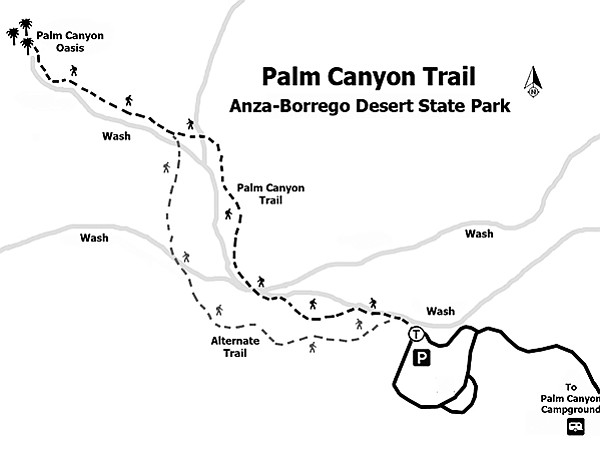 Distance from downtown San Diego: About 86 miles. Allow about 2 hours by car (Borrego Springs). From Ramona, drive east on SR-78 to Santa Ysabel. Turn north on SR-79 and drive to the junction with SR-2/San Felipe Road and turn southeast. At the junction with SR-22, turn east to Ranchita and follow SR-22 to the stop sign in Borrego Springs. Turn left and then immediately right, driving to the entrance of Borrego Palm Canyon Campground. Pay a small day-use fee at the entrance. Overnight camping also available for a fee. Best to make camping reservation in advance, which can be done online. Drive to the west end of the campground and park at the trailhead near the campfire circle.

Hiking length: 3 miles out and back with a loop possibility.

Difficulty: Moderately easy over signed, well-traveled trails. Elevation gain of 600 feet. Some rock-hopping is necessary, but it is not very strenuous. Trekking poles can be useful. Facilities at trailhead. Carry at least two quarts of water per person. Best season is October through May. Dogs not allowed on trails.