The friend at the gate is gone

End of assignment for Border Patrol agent at Friendship Park 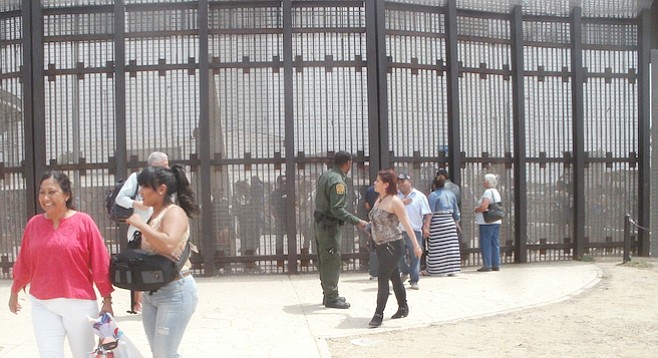 For two years, Border Patrol agent Kris Stricklin has spent his weekends opening the gate at Friendship Park — located at the southwestern corner of the United States — so people could go up to the fence and visit with people in Mexico. Sunday, November 2, was his last day as the gate-opening liaison.

Starting this week, Stricklin is going back to what patrol agents call “the line,” patrolling the border in East County.

"I'm looking forward to it," Stricklin said. "This has been a great assignment and really interesting, but I'm ready to go back to the line."

He's seen five marriage proposals, one Filner fiasco, dozens of gardening sessions, a couple of binational yoga and mariachi gatherings, a visit from the symphony while they played with colleagues through the fence, and the Sunday worship services led by Rev. John Fanestil.

“[Kris] became a reliable presence at the park during the regular hours established in 2011 — Saturdays and Sundays from 10 a.m. to 2 p.m.,” Fanestil said. "From from what I could see, Agent Stricklin valued the park and understood that for some people it is the only place in the world they can see their loved ones in the flesh."

Stricklin’s gate duty began after the Border Patrol installed a huge hydraulic gate — and a smaller door — on the newly constructed secondary fence. The secondary fence is about 50 feet from the actual border fence, which was also redesigned by the Army Corps of Engineers. Because their policies had changed since the last fence was built in the early 1990s, the mesh fence that once extended to the Treaty of Guadalupe Hidalgo monument (marking the actual border) could not be fortified; so, the primary fence now cuts a semicircle around it to the north.

An intense and polarizing four-year-long battle over building the secondary fence ended in 2006 when Congress gave the Department of Homeland Security a waiver to override environmental concerns and just build it. By 2009, the secondary fence was constructed and access to the circle near the monument had ended. But a loosely knit group called Friends of Friendship Park, which included Border Encuentro founder Dan Watman, Border Angels founder Enrique Morones, San Diego State professer Jill Holslin, architect Jim Brown, and Rev. John Fanestil continued the quest for public access so that families could meet through the fence.

Sometimes those visits were complicated, like the time Uriel Sanchez and Dulce Serrano showed up near closing time, with his family here and her family in Mexico. Serrano didn't know it, but Sanchez planned to propose to Serrano. The problem: his brother had the engagement ring and he was late. So, Stricklin counted the minutes and made sure the proposal happened; he was hugged and kissed by a half dozen grateful, crying people before he locked the gate shut that Sunday.

Some visits were more complicated: in April of 2013, several hundred activists, politicians, media representatives, and onlookers were there as the Border Patrol opened the inner gate to Mexico. A cross-border handshake was planned between the first lady of Tijuana, Carolina Bustamante, and the “first lady” of San Diego, Bronwyn Ingram (at the time mayor Bob Filner’s fiancée).

The plan changed suddenly — a four-year-old girl who'd never seen her father appeared on the Tijuana side and Ingram pulled the child forward as her father was similarly pushed to the gate to hug the daughter he'd only spoken with by phone.

The breach of protocol was resolved by Stricklin and his colleagues from the Community Border Liaison team — they moved people back to the sides and got the inner door shut without incident.

"I've seen a lot of things happen," said Enrique Morones, “but these last few years we've been able to plan things knowing Kris was there to work with. We had the mariachis just a few weeks ago. Knowing Kris was there allowed me to have a lot of flexibility to do things there — I could just contact him and tell him what we wanted to do."

Stricklin explained the rules to anyone who came in — no passing things through the fence. And a few times he kicked people out of the area for doing it anyway, including San Diego poet Nasheili Gonzalez, who picked up a bird-shaped kite that came through the fence from Mexico.

No one has been assigned to take Stricklin's place yet, say Border Patrol officials said. But the park friends say they have a list of plans, including Posada on the second Sunday in December.