It’s worth dipping into

Down at the Chula Vista Marina, Ed continues on his big mussel jag. 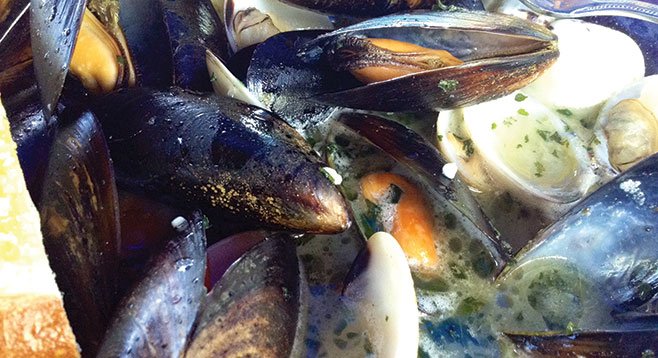 Galley at the Marina

"’ll meet you at the Galley,” says Joe into his cell phone. This was during one of the heat waves. He lives way east of El Cajon, so I knew he was pitching for the coolest possible patio. It’s been a long time since we got together, but now, in this heat, I knew Joe was dreaming of the nearest patio to the waters of San Diego Bay and all its forgiving sea breezes, if he could unstick his shoes from the melting tarmac around his car.

Because the Galley is right on the water, a blip in the wildlands west of the main chunk of Chula Vista and I-5. It’s so empty out here! Here’s a city with the greatest stretch of bayfront and yet they build everything about a mile inland. Main Street, City Hall, shops, city life centered where it’s just plain hot, boring flatland...could be Oklahoma. What is up with that?

Whatever. The Galley knew better. They set up in the wildlands, right next to the lapping waters and now next to hundreds of yachts with slapping halyards and lots of weekend matelots aboard, and they have built themselves a good business. That’s how it looks, anyway, the couple of times I’ve found myself there. Which is good because (downside) it’s not on the way to anywhere, unless you’re heading for Tahiti.

So, even though Joe’s coming from El Cajon and I’m coming from the Bayfront E Street trolley a country mile away, Joe’s there first. Not surprising. He drove. I walked. When I find him, he has that bright-eyed look of someone who’s just been allowed out of sauna duty.

My walk out here was kinda hot, too. Only life I saw in the native grassland was a snowy egret, the way-cool white heron with black legs and bright yellow feet, and then a bunch of tame wild ducks with iridescent green necks who kinda formed an honor guard for my last 100 yards.

Then suddenly you’re at the Chula Vista Marina. You climb up steps to this deck and...man! It’s like entering a stadium where there’s a game on. Place is buzzing, waitresses are charging around the table-strewn deck in spite of the heat. Just about all the tables under the blue awnings are filled up.

Oh, yeah. Now I remember. Had breakfast here once. Pretty delish. Cost something like $4. Remember thinking: What a deal. And the tables! They were beautifully inlaid. Salvaged from the Caliente racetrack, from back in its glory days when Errol Flynn, Ronald Reagan, Rita Hayworth, that whole Hollywood crowd used to spend serious partying weekends down there in TJ. Probably drank at those very tables.

Today, one big table has a load of teachers from the local school holding a monthly get-together. Yacht crews cluster around the bar, planning the weekend. Good old boys with good old trucks from out Joe’s way, by the looks, fill the deck area.

“But most of these people are here for what I’m here for,” says Joe. “This is Thursday, right? It’s all-you-can-eat fish-and-chips night. Five o’clock. They charge $8.99, and you get cole slaw, too. It’s a deal. Why do you think I came down? Of course you’ve got to get a drink to qualify for that price, but who doesn’t need a drink, anyway?”

On the dot of five, Joe heads off to pile his plate high with steaming fish and chips. He shakes vinegar over them. Very tempting. Turns out they have these all-you-can-eat deals going on every Monday and Thursday. Mondays it’s spaghetti ($7.99). 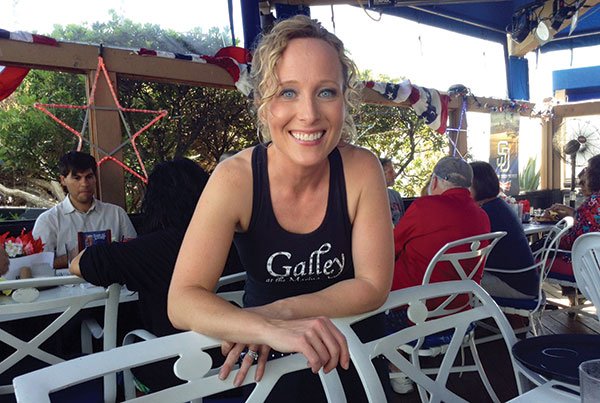 “Don’t forget, we have happy hour till six,” says Heather, the server. She drops off a happy-hour menu. Hmm... Not bad. Kinda standard bar-food fare but still good prices. Probably the best deal is the three sliders and fries for $6.99 or the half-pound cheeseburger and fries, also $6.99. But you’ve got black-bean nachos for $4.99, fish or beef tacos for $4.99, potato skins for $4.99, and steamed clams and mussels for $7.99. I know I should go for the fish and chips. Could fill every square inch of the belly. And I like fish and chips.

Instead, I go for the steamed clams and mussels. I’m on a big mussel jag right now. Especially if the soupy sauce they’re in is good. And this has clams, too.

Also, I ask Heather for the baked potato skins. I mean, can you ever go wrong with skins? Unless you’re worried about cholesterol. Which I am. But sometimes, bust-out feels so-o good. And these are loaded with bacon, cheese, all the good stuff.

And you get melted cheese on toast to dip into the mussels’ soup, too. It’s worth dipping into. The cilantro, garlic, and, for sure, wine flavors get richer as you near the bottom. This is as good as the one I had at Sea180 last week, and a dollar cheaper.

But this place has other things going for it. It has history, for starters. Heather says Fran Muncey still runs it. Oh, yes. Her husband Bill Muncey was a champion hydroplane racing driver. He was killed when his hydroplane flipped in rough waters, back in 1981.

I check out the incredible old photos lining the walls inside. Chula Vista back in the day. The bay filled with square-rigged sailing ships. I.B. when it was two houses and a horse. Plus, actual swordfish on the walls that guys here have caught and had stuffed.

Joe’s slowing down. Still has half a plate left. It was his second refill. He looks at me. “Do you need to salivate quite that much? Okay. Here’s some.”

So, yes, I do help out with his fish. I don’t feel bad. I’m thinking maybe I’ll take a doggy bag back to toss some of the fish to the egret. What would you call that? A bird bag?

What a great story - thanks for reminding me about this hidden gem!