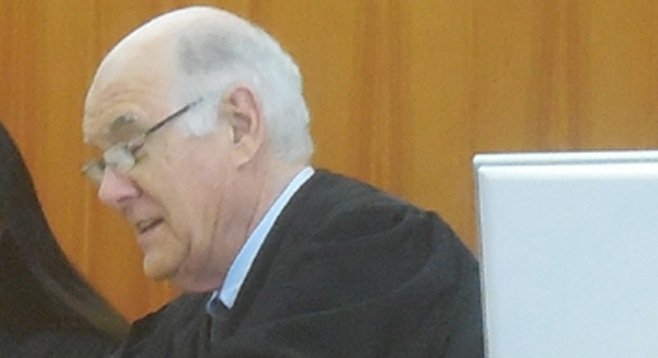 U-T San Diego publisher Douglas Manchester's long battle to build a giant commercial and office complex on Navy property at the foot of Broadway downtown appears to be a legal step closer to reality with a May 28 ruling against the California Coastal Commission by federal judge Jeffrey T. Miller.

The commission filed suit against Manchester Pacific Gateway and the Navy in January of last year, charging that the development violated state and federal environmental review laws.

The Navy completed an environmental report for an early version of the development in 1990. Manchester signed a lease in November 2006 and a tangled web of litigation developed. An appeal of a ruling favoring the Navy and Manchester in an earlier case against the project is pending before the Ninth Circuit Court of Appeals.

In their 2013 complaint against the plan, commission lawyers argued that downtown growth and major alterations Manchester has since made to the proposed development call for a new analysis and public hearings on its impact.

"In light of the changes the Navy and Manchester made to the project and the changes in the surrounding area, Commission staff asked the Navy to provide a supplemental determination as to whether the proposed project is consistent to the maximum extent practicable with chapter 3 of the Coastal Act," the complaint said.

The Navy and Manchester said no.

In his ruling in favor of Manchester's and the Navy's summary judgment motions against the coastal commission, Miller said it wasn’t for him to question the Navy's judgment that the project should move forward without further review.

“The Navy has considered the new residential, commercial, and recreational developments identified by the [coastal commission]; analyzed these developments and concomitant impacts on parking, traffic, aesthetics, and viewshed; and concluded that the impacts do not constitute a significant change requiring a supplemental [consistency determination].

“In reviewing the Navy’s analysis, it is not the role of the court to substitute its judgment in place of learned and experienced individuals with specialized knowledge in the field.

“The Supreme Court instructs that the court is not to substitute its judgment for that of an agency and 'should uphold a decision of less than ideal clarity if the agency’s path may reasonably be discerned.'"

The 70-year-old Miller, who went on senior status in June 2010, worked for 14 years in the state attorney general's office before being appointed to the California Superior Court back in 1987 by GOP governor George Deukmejian. Nominated by Democratic senator Dianne Feinstein, Miller was named to the federal bench here in 1997 by Bill Clinton.

Known as a pro-business judge during his state court career, Miller issued a controversial 1988 ruling against ballot language advocated by proponents of rent control in Vista. “The judge struck statements referring to the rent-control proposal as 'court-tested’ and arguing that 6,000 mobile home tenants, mostly senior citizens, ‘face economic eviction’ if rent control does not pass,” the Los Angeles Times reported.

In August 1990, Miller ruled against the cities of Encinitas, Carlsbad, and Escondido in their effort to compel the County Board of Supervisors to submit a proposed $300 million trash-burning plant to competitive bidding.

"I think it's a sad day for the people of San Diego County when a project of this magnitude is not put out to public view or public bid," Carlsbad resident Tom Erwin told a reporter at the time.

Miller also cleared the way for the election of Republican Randy "Duke" Cunningham to Congress when he threw out a December 1990 lawsuit by Democratic then-congressman Jim Bates alleging that invalid absentee ballots had been illegally counted. Cunningham's margin of victory was 46 to 45 percent. The former Top Gun pilot later went to prison in a bribery case.

So you're saying that, in this courtroom, the deck was stacked in Manchester's favor.

Thanks for nada, old Judge Miller. At least you are consistent in your terrible opinions. And thanks also to George Deukmejian, Dianne Feinstein and my favorite creepy guy, Bill Clinton.

Matt Potter's research and story about this latest outrage against the people of San Diego may drive some faint-hearted citizens to despair. Reading from top to bottom, I just had to laugh out loud, it is so San Diego-perfect.

Ever a Pollyanna, I am still waiting for a hopeful story from Potter.

The United States Navy approved the limited Seismic Hazards fault investigation, without input from USGS, or the California Geological Survey (CGS) who never seen, yet approved, the Federal Environmental Assessment, or CEQA, and NEPA documents.

In 2006 Michael Kennedy of the California Geological Survey (CGS) stated that it is imperative that the exact location of the Coronado strand of the Rose Canyon Fault Zone (RCFZ) be confirmed or denied by the City. Never happened.

In 2007, the former City Geologist Landry stated in the NBC public hearings that he requires more scientific evidence and information before approvals and fault buffer setback are established. A subsequent fault investigation was conducted, but never turned into the city for review or approval.