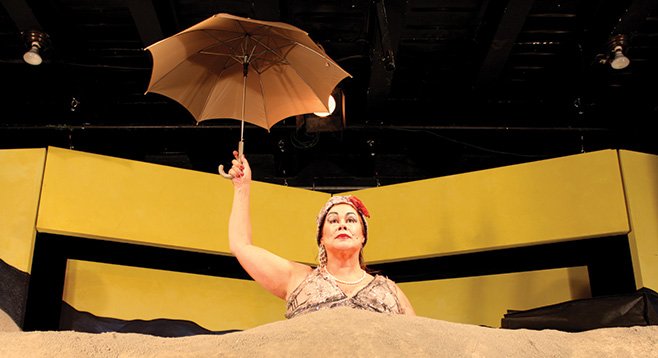 There’s “sadness after intimate sexual intercourse,” Winnie tells Willie in Happy Days. “You would concur with Aristotle there, I fancy.”

Samuel Beckett’s been accused of being so bleak he’s the Dracula of world theater. What often gets lost: a vein of humor marbles through his work (his radio play, All That Fall, is one of the funniest I’ve ever read). It’s just that, as in Waiting for Godot (1953) and Happy Days (1961), the jokes sprout from a landscape so strip-mined it’s unlike anything in nature.

Or theater. Just where, in fact, are Winnie and Willie in Happy Days? “Here all is strange,” she says. There’s no vegetation, so why does she say, “What a blessing nothing grows?” What do they eat? Or do they?

Winnie wonders if she can “still speak of time,” if gravity exists, if the earth lost its atmosphere. These questions would be disturbing enough. What complicates them beyond measure: Winnie is stuck, waist-deep, in a mound of clay-like dirt.

Time still exists. She awakens to the world’s most grating bell, in Act One, and to several in Act Two — so time’s speeding up? And she knows her situation. She’s “caught” — even notices that “the earth is very tight today” — but doesn’t say how it came about. She has vague recollections of life before entrapment. She calls it “the old style” and often smiles as memories return and then sadly go.

Equally bizarre: Winnie’s an optimist. Upbeat, finding joy in shrinking objects and ideas, she compares with the Unsinkable Molly Brown. But there’s a difference: Winnie is sinking. In Act Two she’s up to her neck.

And who is this Willie, on the far side of the mound? Her husband? Lover? A cross she must bear? All, possibly more, of the above? Most often we just see a straw hat, or a wound on his bald spot. He reads the want ads, grunts and snorts, and goes back to his “hole” head first and gets stuck.

If Willie could come around to her side, Winnie would have her happiest day (“I’d be a different woman”). As things are, she has a crick in her neck from admiring him. And his often mute, semi-presence remains one of her “abounding mercies.”

The situation’s like Humpty Dumpty. Only some pieces fit together. Peter Brook put it best: “Beckett’s symbols are powerful just because we cannot quite grasp them; they are not signposts, they are not textbooks, nor blueprints — they are literally creations.”

Beckett even gives us time in Act One to figure this out (no vegetation? Thank goodness?). And to discover that, since this world only jibes partially with ours, maybe we should look elsewhere. And listen more carefully, since Winnie composes the story of her life.

As in Marcel Proust novels, a sound or a smell triggers memories: of trouble, as when she produces a revolver and keeps it close at hand, and happy days. The smallest items can give her joy; her glass is at least half full. And she has such astonishing forgiveness, if you could walk in her emtombed shoes, you might sink by comparison.

Alan Schneider, theater legend and former faculty member of UCSD’s department of drama, directed the world premiere of Happy Days in 1961. He said it was his favorite Beckett play. Scott Feldsher, a student of Schneider’s, makes his — and Slegehammer Theatre’s — return to the stage after a long absence with an almost micro-homage to Beckett and Schneider.

Except for a rectangular frame across Natalie Khuen’s otherwise excellent set (Beckett detested “color,” i.e., anything that looked artsy or detracted from the spartan look he demanded), this production would have pleased the master.

Dana Hooley most of all. During the 90-minute piece, she lives dozens of lives, each a version of Mildred/Millie. She dives down through time, is ever-present, and bravely faces a future worse than death for her: when she’s alone and words fail.

Beckett had a very specific woman in mind for the part. When casting Winnie, Alan Schneider worried that the women capable of playing her “would be terrified” by her monologues, not to mention being “stuck up to their waist and then neck in a pile of stage earth.”

Her flickers of mood and shifts of voice, her in-the-now discoveries, Minnie’s bourgeois sense of propriety, and most of all an inner spark — Hooley performs as if Beckett wrote for her. Francis Thumm, her real-life husband, plays Willie (whose final appearance, thanks to Sarah Golden’s costume and a phony mustache, looks like Mr. Monopoly of the board game).

Whether dredging out his sinuses, or other orifices, Thumm’s just right. He and Hooley form a local in-joke with serious intent. One of Winnie’s recurring subjects is marriage, the entire zodiac from how it begins, evolves, and may or may not endure.

People want to take easy, packaged “meanings” from Beckett’s plays. I don’t think that’s how they work. The more he wrote, the more he restricted the visual. So much of theater, then and now, is about sets and costumes and elaborate lighting. To Beckett the visual makes audiences just passive watchers and upstages what’s being said. In his final works, he narrowed his focus down to a single spotlight and created a theater not for meanings but as site for meditation. A speaker presents a subject — as a point of shared focus with the audience. As the speaker explores it, the audience may engage in contemplation as well.

Winnie’s a great medium in this regard. Other “subjects” in Happy Days include the persistence of change, to unearth what’s important, and as Wordsworth says in the great ode, to “grieve not, rather find strength in what remains behind.”