Suspect has 12 prior felony convictions in two counties 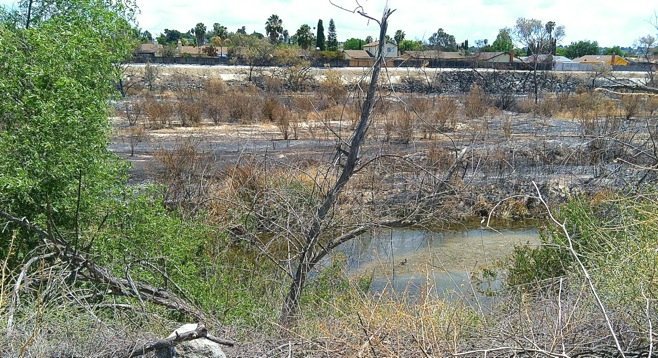 A man who Oceanside police said was seen feeding a fire during the conflagrations two weeks ago had a hearing this morning in San Diego Superior Court.

According to police, Alberto Beltran Serrato, 57, was seen two weeks ago, on May 14, “pulling dry brush from the ground and placing it on the smoldering bushes” of a fire burning across from Del Rio Elementary School. It was after 1 p.m. when the fire was also threatening homes along the rim of the broad San Luis Rey Riverbed there, in the 5200 block of North River Road.

Two Oceanside police officers, Frank McCutcheon and Ron Nevares, were controlling traffic at the scene when McCutcheon saw “the spot where Serrato placed the brush erupted in flames and quickly spread,” police reported.

Serrato was arrested on the spot and two days later was formally charged with felony arson. The published sentencing range for arson is two to six years in prison.

Prosecutor Cal Logan alleges in court documents that Alberto Beltran Serrato has 12 prior felony convictions, beginning in 1987. The crimes are allegedly from two counties: in San Diego County he was convicted of assault, spousal injury, and a weapons charge; in Riverside County he was jailed for weapons, destructive device, and drug crimes, the deputy district attorney claims.

The defendant pleads not guilty, is currently held in lieu of $250,000 bail, and is next due in San Diego’s North County Superior Court on June 2.

After the hearing today, defense attorney Deborah Kirkwood declared of her client: "He was trying to put out the fire." Kirkwood confirmed that on Monday of next week, June 2, she expects to defend Serrato at a preliminary hearing. Normally a prosecutor will present just enough evidence so the judge has a "strong suspicion" that a crime was committed and that the accused is the guilty person, at a "prelim." The prosecutor hopes the court will order the defendant to face the charges, at trial. Or the judge could find an insufficiency of the evidence, or that no crime was committed, and order charges dismissed and the defendant released. 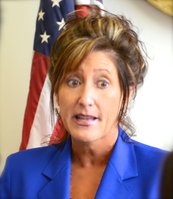 San Diego Superior Court judge William S. Dato dismissed all charges against Alberto Serrato, today, August 14, 2014. The jury had declared themselves hopelessly deadlocked, the vote was 7 for guilty and 5 for not-guilty, late on August 7, 2014. Look for story update soon.