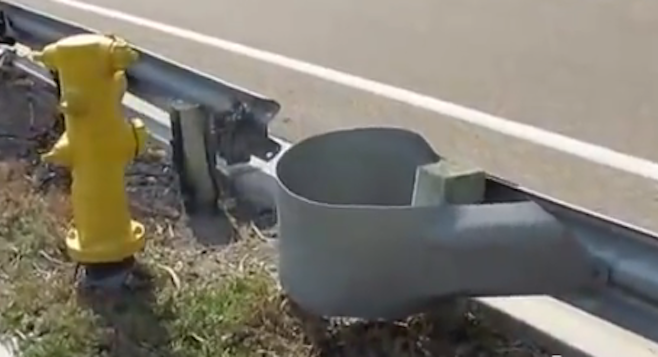 I happened to be reading an account of the Poinsettia fire and came upon a video on the San Diego Reader website (Neighborhood News: “Carlsbad fire official designates potential crime scene,” May 20). At the five-minute mark, the camera panned in on burned and burning 4”x4” timbers used to support the guard rails on this particular section of Camino Road above the golf course.

The two-feet grass strip between the fence and the curb had not been subjected to intense fire. Also, a fire plug next to one of those burning supports does not bear any evidence of fire, nor does the galvanized guard rail itself. The intense fire was above the ground and could have only been produced by a “firenado.”

Dropping water by air on a fire is as stupid as pouring gasoline. Evaporated water is hydrogen and oxygen. The two in combination can produce temperatures in excess of 3000 degrees F.

Regarding Mr. Demsky’s attack on Lindbergh (Letters, May 22).

First of all, Lindbergh’s aim in Germany was to assess the Luftwaffe. He saw how dangerous it was to allied survival and wanted to prepare the United States. As to his liaison with a woman in Germany, that has little to do with Lindbergh’s alarm at our lack of preparedness. I do not care how many children he fathered.

Göring and the Luftwaffe commander gave the high award to Lindbergh in an effort to win him over. Lindbergh was undoubtedly aware of the Nazis’ PR tricks. Admittedly, Lindbergh had no great affection for Jews and was blunt in his remarks. Roosevelt hated Lindbergh and refused to employ Lindbergh’s genius by allowing him to serve in the armed forces. Nevertheless, Lindbergh did all he could, as Demsky notes, to help the war efforts.

Historians will eventually come to his side, not whitewashing his mistakes as the left-wing liberals and communists whitewashed their idols, but correctly giving him credit as an American patriot and a great man in 20th Century history in a less-than-Christian civilization.

Regarding News Ticker: “Pillow Shock,” May 20

A shock indeed, and notice that you’re pretty much fair game if you are elderly in San Diego County, and too frail to testify.

The fact that the criminal in this case is not a citizen of the U.S. was never mentioned in the Reader’s coverage. I’d be interested in a follow-up story about why she wasn’t detained by ICE nearly two years ago when she was charged with a violent, deportable crime, and why she’s still free after pleading guilty to a lesser charge that is still a violent, deportable crime.

In fact, that story would be a good frame for a deeper, investigative piece about our local ICE office’s statistics and performance. How many criminal aliens are free in our communities? How do they alert us when they release or decline to detain those who pose a risk to public safety? I’m sure a good investigative reporter could find a wealth of material to inform us.

This is a hotly debated topic right now, as no one wants to see non-criminal immigrants harassed or abused. I want to know more about how our own communities are impacted.