Trails of Tierrasanta are paved with good intentions

You got a permit? 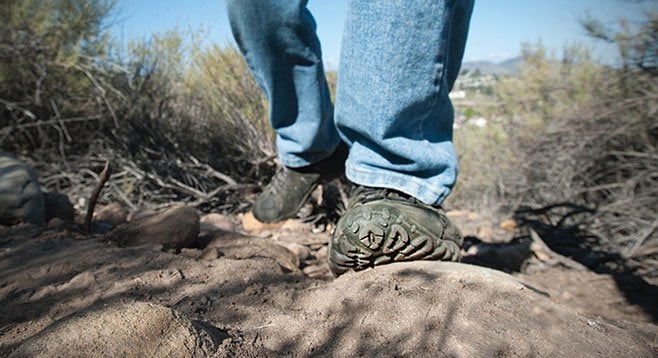 On weekends, in the canyons surrounding San Diego’s community of Tierrasanta, urban guerrillas hack through chapparal with picks and other tools, transforming once-narrow coyote paths into smooth, broad hiking trails.

The urban vigilantes have carved miles of trails through the open space that surrounds Tierrasanta. Construction of trails has occurred for the better part of 20 years. What initially was an attempt to connect fragmented trails turned to an all-out mission to build first-class trails in Tierrasanta.

Many of the trailblazers serve on Tierrasanta’s Open Space Committee, an advisory group to the city’s Open Space Division, which makes it likely that they knew the trail-cutting required permits — permits they never acquired.

Now, a small contingent of residents has emerged to expose the illegal nature of the trail work. Digging into the matter, they discovered that not only was the city aware of the work but plans to issue permits for trails cut illegally. 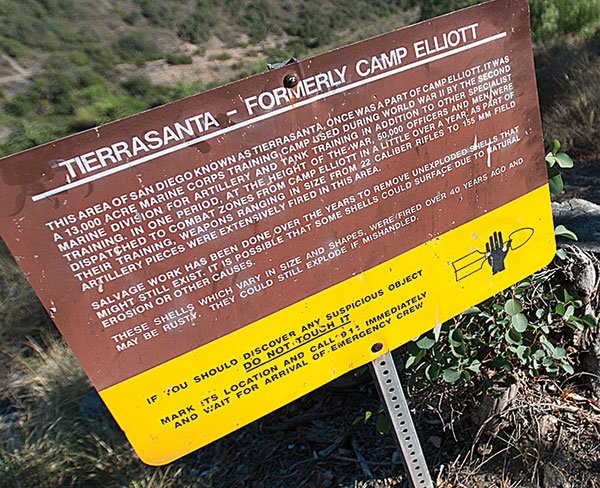 La Cuenta trail was cut through the chaparral without a permit from the city.

A newly built wooden bench sits at the south end of a cul de sac on La Cuenta Drive. Five feet from the bench begins a steep, thousand-foot slope leading into a narrow canyon. This is the beginning to the La Cuenta trail, Tierrasanta’s largest and newest trail.

To help hikers to manage the steep drop-off, trailblazers cleared a series of six switchbacks that lead to the canyon below. After descending into the canyon, the trail, outlined with rocks, weaves through the dense woody foliage. Every few hundred feet, neatly piled branches and dead bushes dry and decompose. A half mile or so to the south, a hiker arrives at what is known as the Cross Country Trail. Outfitted with wooden steps, it links the La Cuenta, Rueda, and Road Runner trails. The steps, the switchbacks, the trails — all were made without permits.

Emails between open-space investigators from the parks and recreation department and residents reveal that city staff were aware of the trail-cutting.

“I see the trail work you have done at the La Cuenta location,” wrote former San Diego open-space investigator Jan Eby to committee member Roberta Froome on October 17, 2008. “Although it isn’t horrible, it is more than was ever authorized. It appears as though the group has crossed over the line between ‘maintenance’ and decided to get into trail construction.”

“This puts the city and the [maintenance assessment district] on the liability hook as it obviously looks constructed, therefore routine maintenance is necessary and safety is implied….”

And while Eby appeared concerned about the work, subsequent emails showed that she was aware of the trail-makers’ motivations.

“It was discussed at our open space meetings to keep it all down to a dull roar, don’t draw attention to and advertise, don’t build....” she wrote. “I depended on you to ‘keep the boys in check’, as you and I had discussed a few times....”

Illegal trail-building has been a problem throughout San Diego for some time. In August 2013, the state Department of Fish and Wildlife warned the city that non-permitted trails were popping up throughout Mission Trails Regional Park, just a few miles from Tierrasanta.

“[W]e believe the construction and use of unauthorized trails has far exceeded the level of impact anticipated by the [Multiple Species Conservation Program and] has directly and adversely impacted sensitive biological resources, and threatens Mission Trails Regional Park’s function as a core biological area and regional wildlife corridor within the [Multi-Habitat Planning Area],” reads the letter. “We are especially concerned that the current level of management and enforcement directed to this area is not effective in addressing the unauthorized impacts to [the regional park.]”

Despite the warnings, five years since open-space investigators first became aware of the severity, the La Cuenta trail and others in canyons outlining Tierrasanta remain.

Instead of remediation, the city plans to issue permits after the fact. 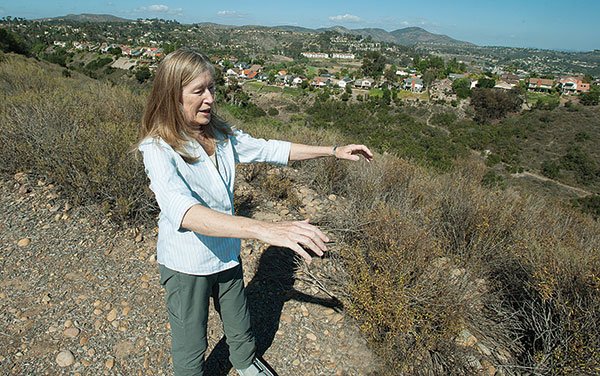 Jennifer Cochrane Schultz is one of a few residents blowing the whistle on illegal trail construction.

“A group of citizens took it upon themselves to build this trail system,” says longtime resident and member of the open-space committee, Jennifer Cochrane Schultz. “This was, and still is, illegal. Our city code makes this abundantly clear. These citizens were entirely aware of this. Sadly, the Open Space Division allowed this activity to go on unabated for more than ten years and are now trying to backtrack by having the [Tierrasanta Community Council] make changes to its community plan.”

Continues Schultz, “These trails were excavated in some people’s backyards. The question here is; ‘Have these people ever been asked if they want trails in the canyons behind them?”

“Has there been any kind of public hearing or a public study of the recreational needs of these neighborhoods, from the property owner’s point of view? The answer to this is ‘no.’”

Aside from residents hiking down canyons wielding picks and axes to clear brush for trails, there are issues as to how the city and community plan to pay for the permits and associated environmental reports. To do that, city staff recommends the community’s maintenance assessment district pick up the tab for the $21,000 environmental study, a dangerous path for the city to take, say some residents.

According to the district’s engineer’s report, assessments are intended for the maintenance of dedicated open space, such as walking trails, picnic areas and benches. The report makes no mention of paying for the construction of trails.

Cochrane Schultz’s attempts at righting the wrongs in Tierrasanta’s canyons have so far been rebuffed.

“As for the La Cuenta trail, from what I understand, the group took responsibility for that and we are now trying to permit that trail,” wrote Chris Zirkle, director of the city’s Open Space Division. “In regards to the trails being widened…the existing trails have had little to no change to them.... [U]ntil a final trails plan is approved and permitted, [the trail blazers] have been restricted to only conducting maintenance on established trails. Our hope is that through the permitting process unauthorized impacts will be addressed, including the recommendation for closure of some trails that are not safe and sustainable.”

Cochrane Schultz worries that by retroactively permitting illegally constructed trails, San Diego’s parks and recreation department may be clearing the way for other communities to follow suit.

“Trails are a good thing,” she says, “but our open-space corridors are part of the [Multiple Species Conservation Program] and as such require special planning for the building of trails in order to preserve the sensitive environments and habitat. No one likes to hear this but these preserves are meant to be just that, preserves. Let’s select sites for trails, parks, campgrounds, etc., based on thoughtful planning and community consultation before the fact, and leave the rest alone for future appreciation and the maintenance of a moderately healthy environment.

“The Open Space Division has already received a reprimand of sorts from Fish and Wildlife for the illegal activity in [Mission Trails Regional Park]. Now they are backtracking in Tierrasanta, trying to permit the illegal work. So, are they opening the proverbial can or worms? I think so.”

(None of the alleged trailblazers reached for this report would comment.)

Jennifer's concerns are rebuffed because she is a very difficult person to deal with.. She causes trouble all over Tierrasanta and makes a fool of herself. Most people quit whatever she is involved in because they cannot deal with her and want nothing to do with her. Pick your battles, Jennifer and quit watering the canyon. That is illegal as well!

Kelly, can you make any comments that are pertinent to the facts as presented in the article? Attacking the messenger is unseemly at best.

Not an attack at all. Fact. Go join one of the committees she is on and then we talk. You will quit after one meeting! Does not play well with others.

"Continues Schultz, “These trails were excavated in some people’s backyards. The question here is; ‘Have these people ever been asked if they want trails in the canyons behind them?”"

If they were literally excavated in people's backyards, that would be an issue. But apparently, as Ms Schultz continues, it happened in the canyons behind them. This is inflammatory misinformation.

Secondly, did anyone ever ask if they didn't want the trails? Take a poll. My guess is that Ms Schultz would be in the minority by a large margin. There are scarce recreational opportunities in San Diego, especially considering the potential of the area. The Mission Trails issue, as noted in the article, is just one example of such overreach and bureaucracy.

Illegal trails are symptom from a failed Citywide Trails Plan. If we had good trails, we would not have illegal trails or massive over crowding at Cowles Mountain and Iron Mountain.

Case in point is Mission Trails Regional Park. The park proclaims 53+ miles of trails - 32 miles are fireroad! Only 9 miles (mostly in Cowles) are hiking only with another 9 miles as multi-use (in many small sections). Few people hike a fireroad and think its a nice trail! Since it is so ridiculous to get trails built, the City decided to RENAME service roads as multi-use trails. Hikers want trails - NOT fire roads.

Ultimately, the problem is how long it takes to get a trail approved - ten years is normal. This puts the city in a tough spot. The majority of citizens want multi-use trails (not fire roads). A minority will do everything possible to slow the process down. The city can close trails, but then you have a public backlash as seen last fall with 600 protest riders in Mission Trails. Furthermore, closed trails rarely stay 'closed' as reroutes are common.

I understand Schultz' concerns yet also realize people will not wait ten years for a trail to be built. Until the process for building trails is dramatically streamlined and the city STOPS calling fire roads trails, nothing will change.