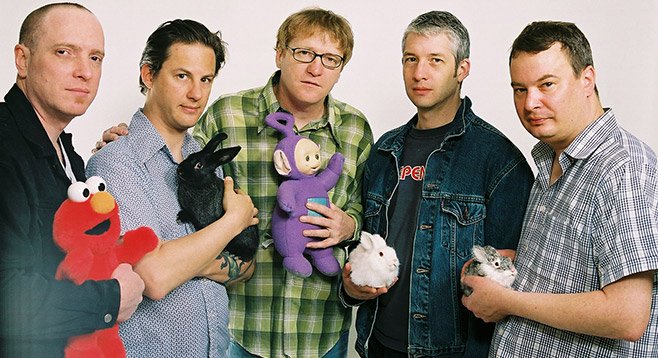 Last year, Camper Van Beethoven released the first of a pair of California concept albums. La Costa Perdida set its sights on Northern California and is, overall, the brighter collection of songs. In a twist of fate, El Camino Real, the record representing sunny Southern California, proves to be the darker journey.

Originally based in the Redlands area east of L.A., the band’s soul connections to San Diego are on display throughout the disc. One curious nugget is the “music shop in Encinitas” referred to in the song “Darken Your Door.” David Lowery, the band’s founder, revealed to the Reader via phone that this was a shout-out to Lou’s Records. He then revealed that Lou’s was one of the band’s maiden tour stops.

“That was really early on,” said Lowery. “I remember we just played acoustically and somebody got lost, so we didn’t have everybody there. There’s some really funny pictures of that show that somebody gave us. We’re literally just playing behind stacks of records. That would have probably been fall of 1985. I remember they also gave us this album by a band called Department Store Santas, which I think was just one guy, recorded on a four-track in his own basement or something like that. Not basement...you don’t have basements in Southern California. That record was weirdly influential on us because it was like Roky Erickson...Skip Spence...Syd Barrett or something.”

Another key track on the album is “Camp Pendleton,” a dark, dancefloor number that gives Camper Van Beethoven a Depeche Mode–style makeover.

“We did a record in 2004, New Roman Times, which is a concept album about a civil war in California,” Lowery said. “In a weird way, this song was kind of left over from that album. It was a scratched-out idea I had for a Marine with PTSD. We were gonna incorporate it into New Roman Times, but I never really did. When we were putting together the Southern California half of this album, I sort of stumbled across this and I thought, Oh, we forgot about this one. We never really developed it, but it fits really well. I mean, it’s Camp Pendleton. It fits perfectly in the Southern California vein. Stylistically, it’s a little different because we didn’t actually use drums on it, we just used an early ’80s drum machine. I think it’s a cool track, though. Really dark. What he’s really saying is ‘Pump up the violence, bring the ordnance on down.’”

In true SoCal fashion, El Camino Real ends with “Grasshopper,” a song about a surfer stuck in Baja. One could be fooled into thinking that Lowery is a slave to the wave with details like “surfed Seven Sisters all day long” sprinkled into the song. But, he apparently picked up most of this knowledge from his brother-in-law, a surfer who lives in Orange County.

“Grasshopper” basks in the gentler side of the band. A serene song that seems far-removed from the punk-rock giddiness of “Take the Skinheads Bowling.” It’s a switch that Lowery recognizes and has fully embraced.

“The most striking thing to me about listening to early Camper and new Camper is that we sort of started out almost parodying hippie culture, because we came under the punk-rock theme but ultimately we embraced it. We can really pull off some kind of Grateful Dead meandering, folky, country-rock.”