Deported veterans are veterans, too 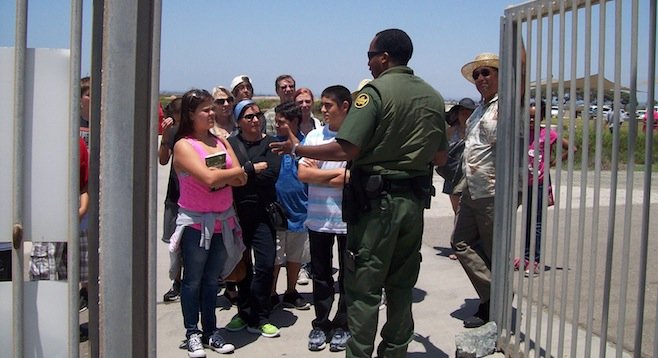 A Memorial Day celebration at Border Field State Park dedicated to deported veterans suffered from blocked public access by the Border Patrol because of maximum-occupancy restrictions.

The event was organized by the Border Angels group in cooperation with the regular Sunday bilingual religious ceremony that takes place in the Friendship Park area — a kind of no-man's land between the old fence on the Mexico side of the border and the new fence (built in 2009) running parallel about 60 feet away.

In addition to the usual honoring of veterans on Memorial Day, the Friendship Park service focused on Mexican-born vets, living and dead, who were deported despite their honorable discharges from the U.S. military.

Reverend John Fanestil, who was conducting the religious ceremony on the American side along with Pastor Guillermo Navarrette on the Mexican side, said during the service, "On this day, we remember the soldiers, honorably discharged, who were deported to Mexico."

Fanestil and Guillermo spoke into wireless microphones that transmitted to a sound system on the Mexican side of the fence; sound equipment is reputedly not allowed on the U.S. side.

Hector Barajas, attending in uniform, said he started serving with the Army's 87th Airborne Division in 1995 and was honorably discharged in 2001. Barajas said he was at the service not only "to commemorate all the people who died in combat" but also to support "all the vets who are being ignored despite having problems with drugs, PTSD, and emotional or psychological problems." Barajas said he was deported in 2004 after a prison term for discharging a firearm in a vehicle.

Border Angel volunteers wore T-shirts that read, "Who Would Jesus Deport?" while various speakers in Spanish and English testified about their experiences, some breaking into tears. An American flag, attached to the border fence on the Mexican side, was saluted by the deported vets while taps was played.