Change of pace: a double IPA? 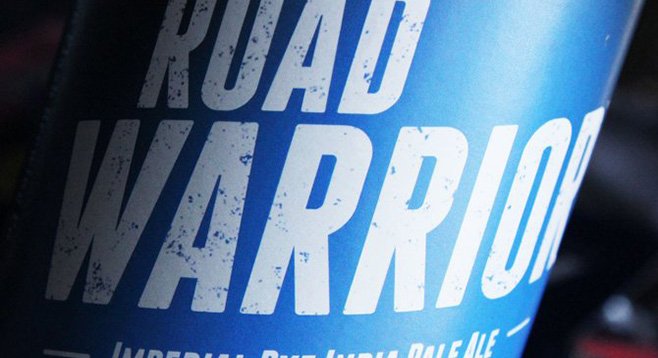 Like any industry, craft brewing has its trends. Right now, the hottest of them all is the West Coast-style session India pale ale. We discussed this hot hoppy beer style three weeks ago. So far, Ballast Point Brewing & Spirits, Pizza Port, Stone Brewing Co., and Karl Strauss Brewing Company have packaged their own session IPAs, with numerous smaller brewers without the means to bottle or can exploring the style as well. And that’s just locally. Breweries all over the US are all about session IPAs.

With so many companies gravitating in this direction, it’s important to note that daring to do things differently than everyone else is how San Diego brewers first gained the attention of beer drinkers across the country. Channeling this spirit, Mira Mesa’s Green Flash Brewing Company recently released a beer that wags the finger on a heavier hand at the session IPA crowd—Green Flash Road Warrior Imperial Rye IPA. Registering 9% on the alcohol-by-volume, it’s anything but sessionable…and that’s the point.

Brewmaster Chuck Silva and company purposely set out to craft something massive in flavor and hop bitterness. One sip shows how successful they were in their mission. The beer is almost heavy in its resinous glory. Flavors of grapefruit, mango and passion fruit come on strong (like Karl Strauss’ sessionable number, Mosaic IPA, the Mosaic hop does the heavy IBU lifting here) along with a forceful spiciness from the rye. It’s not what a savvy suds fan would expect as a summer seasonal, but predictability is dull, and that’s so not what San Diego beer is about.