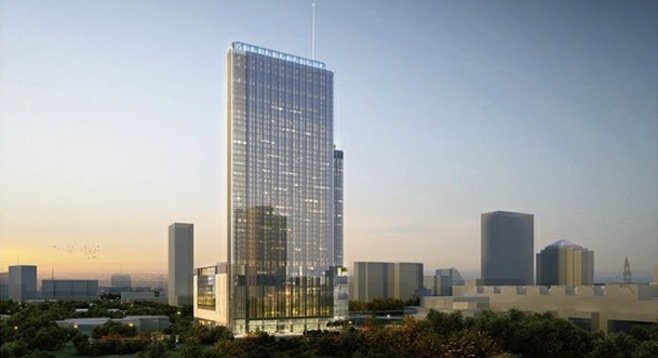 It will be a long, hot day at the end of Austin's typically hellish Texas summer when Douglas Manchester's “Fairmont Austin” convention hotel finally breaks ground.

At least that's the latest prediction from the voluble Republican Party kingpin, real estate developer, and U-T San Diego proprietor in an account by his newspaper.

"Construction on the 1,054-room Fairmont Austin, which will be linked to the Austin center via a sky bridge, is expected to get under way by September, said Manchester," the paper reported in a gushy story. It went on to say that this Wednesday, May 21, Manchester "inked a nearly $247 million contract to construct a 47-story convention hotel in Austin."

“The Fairmont Austin will be the premier hotel, in my opinion, in Austin, and it will have the only direct connection to the convention center, so I believe it will be the headquarters hotel for the citywide conventions that take place there,” the U-T quoted its owner as saying.

“It will allow for citywide conventions to take place, but right now Austin is having a very difficult time doing citywide because of the lack of mega hotels.”

The U-T report is raising eyebrows in the Texas capital, but not in the way Manchester and his U-T editors apparently intended.

Though the piece didn't make note of it, news of the construction deal is already a bit stale. Manchester's people announced the contract two months ago in a story run March 18 by Austin's daily newspaper:

"Manchester Texas Financial Group LLC told the Austin American-Statesman it has awarded Hunt Construction Group a $247 million contract for construction of the luxury hotel, which is expected to take 32 months to complete."

So far, at least, lots of newspaper ink and hot air appear to be the closest to reality the project has gotten. Guessing when Manchester will break ground on his magnum Austin opus has become something of a parlor game among Texans in the know, ever since word of the venture was first reported almost three years ago by the American-Statesman on June 24, 2011.

“Calling Austin ‘Texas’ finest city,’ Douglas Manchester, founder and chairman of Manchester Financial Group, said in a statement that he believed in the potential of downtown development enough to expand the firm’s interests here in November by establishing Manchester Texas Financial Group."

Almost a year later, on May 31, 2012, a U-T story offered: "Expected to open in 2015, the $350 million project will be managed by luxury operator Fairmont Hotels & Resorts, Manchester Texas Financial Group announced this week."

Since then, there have been a series of stories in Austin papers announcing various revised groundbreaking dates that have since passed. Word of how Manchester plans to finance the project has yet to be provided by the developer, widely known in La Jolla real estate circles for using OPM — other people's money.

Last June, Don Bauder reported here that Manchester was seeking to use controversial cash from Chinese investors wanting to purchase U.S. visas in exchange for investments in Texas. "This month, his son Douglas Manchester, who heads the Austin project, touted it to potential investors in China."

Since then, Republican senator Charles Grassley of Iowa, has launched an investigation into the visa-selling, overseen by the Obama administration’s Department of Homeland Security.

The program's former administrator, Alejandro Mayorkas, has been the subject of a low-profile federal probe into the matter. Earlier this month, a Grassley spokeswoman told the American News of Aberdeen, South Dakota, that investigations were continuing but could offer no details.

Meanwhile, back in sweaty Austin, conversation about the hotel's ultimate fate continues to rage on in a forum on a website called SkyscraperPage.com, whose online denizens have been vigorously debating the project's future in an often contentious thread going back to June 2011.

"You are treading on dangerous ground by doubting this project," wrote Spaceman on May 16. "The optimists that populate this board will attack you for not buying into anything being built in [Downtown] Austin. Nothing wrong with optimism but realism has to carry some weight. I hope this hotel is built, but anything planned in that southeast part of DT seems iffy at best."

"Finest city." How original, Doug. Did you think that up on your own? Alas, the superlative must be restricted to describing the sweaty area within the borders of that grand Republic, because, after all, it's not really America there. Just ask Rick Perry.

Having lived in that awful state many years ago (at Fort Hood next to Killeen), it doesn't take much for Austin to be the best city in Texas (which it IS).

I see that the story was listed in the Manchester U-T under "business" and "tourism". I just wonder what the hell it has to do with San Diego.

Are y'all serious? I'm by no means a fan of Manchester's opinions relating to unions or, really much of anything. But this article is such shoddy journalism I wouldn't use the Reader to line a basket of fries.

First of all, the Downtown Area Project Coordination Zone meeting just under two weeks ago said this and another project planned across the street from this site are scheduled for groundbreaking in September. Furthermore, there's so much going on in the Capitol Area that there are not enough construction workers in the Central Texas area to work on a large project like this, so logistically they're going to have to wait until at least one project tops out, my guess being the Bowie tower as that appears to be the closest to completion.