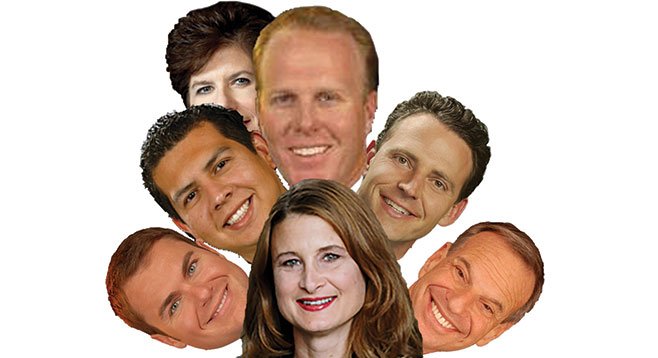 Two more big-money lobbyists and campaign contributors have gotten the nod from mayor Kevin Faulconer for high-profile city development positions. Donna Jones, a land-use partner at the downtown powerhouse influence-peddling law firm of Sheppard, Mullin, will continue to sit on the board of Civic San Diego, the redevelopment replacement commission. According to her law-firm bio, “She has obtained approvals for construction or expansions of everything from commercial buildings to resort hotels to shopping centers to landfills and, of course, residential — including master planned smart growth communities such as Del Sur.”

A regular campaign money player since 2007, the lobbyist has given a total of $23,670 to city candidates, including $1250 to fallen Democratic mayor Bob Filner and $2050 to the failed 2012 mayoral campaign of GOP district attorney Bonnie Dumanis. In the same race, she gave $1000 to Republican city councilman Carl DeMaio and $500 to then–GOP assemblyman Nathan Fletcher. Last year Jones kicked in $2500 to Fletcher’s mayoral race but made her biggest contribution, $4000, to the ultimate winner, Kevin Faulconer. Covering all the bases, she forked over $1750 to losing Democrat David Alvarez.

Jones is to be joined on Civic San Diego by Ted Shaw, “a Senior Land Use Consultant at Atlantis Group with more than 25 years of experience,” according to Faulconer’s memo. Shaw, who used to work at Latitude 33, has given a total of $3501 to city candidates, records show, including $500 to DeMaio for mayor and $300 to Faulconer’s 2010 city-council race. Lobbyist Marcela Escobar-Eck, whose client list includes Kilroy Realty, developer of the proposed One Paseo project in Carmel Valley, runs Atlantis. He’s married to planning commissioner Susan Renee Peerson, appointed in March 2012 by GOP mayor Jerry Sanders. That cozy connection set off a ruckus among One Paseo opponents last year.

“Mr. Shaw’s employment at Atlantis which acts as a registered lobbyist for Kilroy Realty has a direct bearing on the decision that his spouse Ms. Peerson has to make on the proposed One Paseo application at the Planning Board,” wrote Carmel Valley resident William Bibb. “Mr. Shaw makes considerable money at Atlantis. As his spouse, Ms. Peerson has a substantial community property interest in this compensation — tens of thousands of dollars.” Peerson subsequently agreed to recuse herself from hearings and voting on the matter.