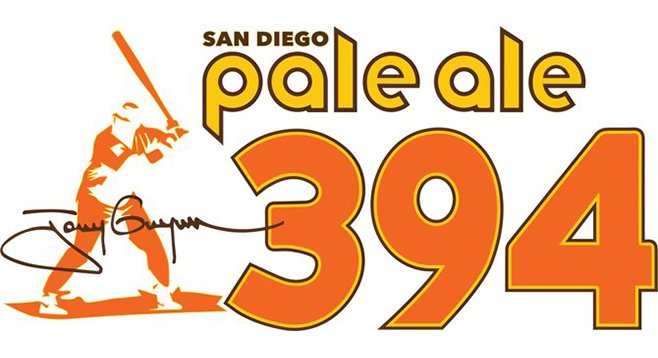 Sports conversations are often opinionated and most topics are up for debate, yet few question Tony Gwynn‘s status as the best player in the history of the San Diego Padres franchise. The Hall of Fame rightfielder spent his entire career with the Friars, amassing an astounding career batting average of .338 while decorating his trophy case with Gold Gloves and Silver Slugger bats in the process.

Admired by baseball fans everywhere for his loyalty and skill, he still calls San Diego County home and coached the Aztecs baseball team in a stadium named after him at his alma mater, SDSU, until medical issues recently forced him to take time away from the game.

As a tribute to all he means to America’s Finest City, local brewery AleSmith Brewing Company has crafted a new beer called Tony Gwynn’s 394. A San Diego Pale Ale, it is the first in AleSmith’s new Signature Series of specialty brews. The name references the highest single-season batting average Gwynn recorded during his illustrious career—.394 in 1994.

AleSmith owner Peter Zien considers this an example of standouts from different arenas conspiring to create something special. Gwynn lent input and direction that the brewery translated into a 6% ABV light copper-colored brew Zien says fills the gap between AleSmith X Extra Pale Ale and AleSmith IPA. Floral and citrusy on the nose, it presents restrained hop bitterness on the tongue followed by a biscuity finish.

Meant to be enjoyed over the course of several innings at a baseball game, AleSmith fully expects Petco Park to offer Tony Gwynn's 394 during the Padres' 2014 campaign. The beer will debut on June 6 at the San Diego Padres Beer Festival, and be directly followed by a launch event at AleSmith’s tasting room on June 7 featuring baseball-themed games and merchandise, plus a raffle featuring items signed by Gwynn.

The greatest single-slapper of all time.

Tony Gwinn tops the list of almost-great Padres, a team that has never had a truly great ballplayer. Look at the rest of the stats for that .394 season to get the full story.
Only 110 games played. Why? because his body broke down every year due to weight issues. Dude liked his post-game buffet.

Dude, come on. First of all, show some respect. It's Gwynn. If you don't like the Padres or Tony Gwynn, that's fine, but quit making yourself look stupid. Look at the rest of the stats for that .394 season to get the full story. The reason he only played 110 games is because that year the season ended early because of the strike. Nobody played more than 116 games (with Gwynn playing in all but 3 of the Padres games), no player had more hits than Gwynn, including those who played 111-116 games. And how about those 64 RBIs? Gwynn's career avg was 76 RBIs , so he was pretty much on track for the season and was tracking for a career high in 2B and HR. As far as "his body broke down every year due to weight issues", it wasn't until 1991 that he started have knee problems. Before that, it was pretty much hand, wrist and finger problems. I guess haters gonna hate.

Ah… you're right, Dan. Forgot about the strike season.

But I think the general point stands. He was never a great RBI guy or power guy or runs scored guy. And his body did break down due to weight in the second half of his career. Remember the perpetual heel problems later on? Remember the gut and the double chin. Look at the picture below of him hitting that homer off David Wells in the 1998 World Series. That's a fat dude. By this point, he'd let himself go from a genuine multi-tool guy to a batting average-only guy.

I'm not a hater. I think he deserves the hall of fame. I think he's the best Padre ever. But I don't think he's an all-time great. 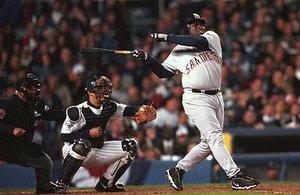 Joaquin_de_la_Mesa, If you want to say that Gwynn was never a great RBI guy or power guy or runs scored guy, I would agree and I don't think Gwynn ever tried to call himself any of those. But, your original comment addressed his 1994 season, which you were way, way off base about, and that's what I was responding to. And if you want to say his body did break down due to weight in the second half of his career, I would have to agree with that also, to a certain extent. But again, that's not what you said. What you said was his body broke down every year due to weight issues, which again is not true and that is what I responded to. I also will disagee somewhat that Gwynn was an average only guy as years went on. Seven of his 10 best RBI/ HR years were in the second half of his career, with 43 of his 135 career home runs coming in his last three full seasons 1997-99. That includes a career high 17 in 1997, a year in which he also had his most hits in a season, 220, and his highest average,.372, in a full season.

Deserving of the HoF? Yes.

An all-time great? Well, let's let the numbers answer that one. 3141 career hits, which is top 20 all time. 20th on the all-time career average list, at .338, and eight of the players above him played all or most of their careers in the 19th century. Eight NL batting titles, sharing the record with Honus Wagner. Only Ty Cobb's 12 AL titles are more in baseball history. NL record for consecutive seasons hitting .300 at 19. Only Cobb at 24 had a longer streak. Tied with Pete Rose for most seasons leading the league in hits, at 7. Career average of .458 with the bases loaded. Five Gold Gloves and a career .987 Fld %, better by the way than both Carl Yastremski's and Ted Williams outfield stats From my point of view, anyone with those kind of stats deserves to be called an all-time great. For what it's worth, the first major league game I ever saw was a couple of weeks after my then girlfriend/later wife moved to San Diego for school when the Padres beat the Dodgers. We had season tickets from then until we moved to LA in 1994, so I've seen a lot games That you have a differing opinion is fine by me.

Well, Brandon, you did say "Sports conversations are often opinionated."