Residents to get reimbursed for illegal maintenance assessment district 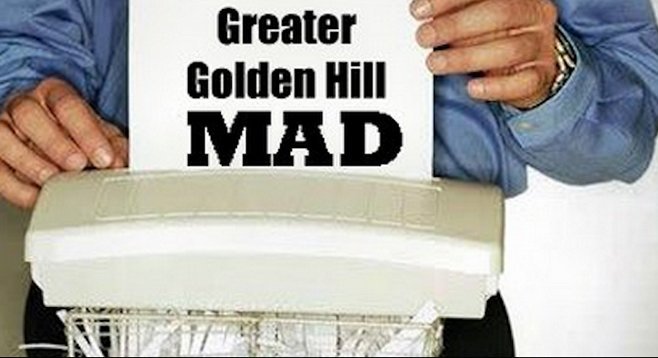 It was a long time coming for attorneys and volunteers in Golden Hill and South Park to get reimbursed, at least partially, for their time and money spent to fight the city over their illegally formed maintenance assessment district.

On Tuesday, May 20, city councilmembers will put an and to the case by awarding $300,000 from the Public Liability Fund to those involved in the lawsuit.

Residents first filed their complaint in 2007, shortly after the district was formed. They argued that the city rigged the vote by exaggerating city-owned property included in the district. Residents also argued that there was no real distinction between "specific" benefits for property owners and "general" benefits for non-paying members of the public, as called for in state and municipal laws governing assessment districts. In February of 2012, a judge agreed, ordering the city to invalidate the Greater Golden Hill Maintenance Assessment District.

Since the ruling, only a small percentage of residents have received refunds. The reason for that is the city attached a four-year-statute of limitations clause, this despite the fact that residents filed their lawsuit the same year the district was formed.

Refunds weren't the only thing city officials and its attorneys hoped to delay. City officials challenged having to pay the legal fees spent by a number of residents and now-deceased attorney Hal Tyvoll, who led the legal charge before succumbing to poor health.

Their hard work and hard-earned money paid off in November of last year when California's Court of Appeals rejected the city's argument that it was not responsible for fees. Now, six months later, those residents and a volunteer attorney will get reimbursed, albeit partially.

"This action is for the approval of a settlement reached between the City and the Golden Hill Neighborhood Association in the amount of $300,000. The settlement will conclude two lawsuits filed by the Association against the City in which the Association contested the legality of the City's Greater Golden Hill Maintenance Assessment District (GGHMAD)," reads the May 20 council docket.

The victory may have some ripple effect for improvement districts throughout the city. In July 2012, not long after the decision, the city attorney's office issued a memo rethinking the legality of special assessments and promoted the idea that residents and business owners form their own private association.

"The current legal landscape with respect to both business-based and property-based assessment districts is treacherous. The passage of Prop 26 has left the legality of business-based assessments in limbo until it is clarified by legislation or litigation. The Golden Hill holding has imposed upon the City and its hired assessment engineers the seemingly impossible task of dividing nearly every improvement and activity into special and general benefit and quantifying each based on solid, credible evidence...

Despite the warning, the city has marched forward, forming new districts (read: Barrio Logan and Civitas). Currently, the city is fighting a lawsuit from attorney Cory Briggs, who challenges the legality of the city's 55 maintenance assessment districts.

These lawyers were there for the people - at the city, the community's objections were ignored. The Court and the Appeal Court sided with the legal arguments. Dorian Hargrove gave this issue the only publicity it received from the media, going back to 2007. So THANK YOU, Dorian, and thank you to the lawyers who helped the people.

Dorian Hargrove and The Reader have provided the only accurate and honest reports on the GGH MAD, in particular, and on MAD procedures and State laws in general. It takes a bit of research to understand what may and may not be done to create the various types of assessment districts, and Mr. Hargrove did the job well.

Other local reporting (UT, VoSD) got much of what was at issue quite wrong, or omitted crucial but simple details, and despite comment never corrected what they had written. Given the insider boosterism and privatization scheme support of the entities employing those other reporters, perhaps the bad reporting was intentional. One could see from public comments on those articles that readers were often confused about State assessment laws and their legitimate use, their confusion made worse by what was written.

Unfortunately, inaccurate reporting on MADs and PBIDs continues; a recent article in Uptown News on the political unit of Greater Golden Hill (which includes South Park) blurred the distinction between legal (Kensington/Talmadge) and illegal (Golden Hill/South Park) MADs. The Uptown writer scratched his head over how "an area the size of Golden Hill" could manage to exist without a privatization scheme. He conflated the illegal assessment of residential property (Golden Hill) to purchase open-ended lists of goods/events that an administering nonpropfit wanted to buy/undertake, with the formation that is now in progress of a Ken-Tal Landscape and Lighting District (special acorn light installation in the PROW specially benefiting and adjacent to each property that would be assessed for capital cost, electricity, and maintenance of the lights).

Meanwhile, privatization efforts continue. Todd Gloria, North Park businesses, and the city's Economic Development and City Attorney staffers are proceeding with another privatization scheme, another way to force property owners to pay assessments to a private group. To wit: on the same day that the Golden Hill MAD legal fee payout is docketed, the council will award North Park Main Street (NPMS) $6000 to go toward the ~$34,000 the business group has already obtained in public monies (plus $5000 from J Segal, of the North Parker units). All of the money will go toward creation of an "engineer's" report on the geographic boundaries and the number of properties, at a certain assessment dollar amount, that will be adequate to turn the existing Business Improvement District (BID; fee collected by NPMS only on a business license) into a more lucrative (for NPMS) Property-based Business Improvement District (PBID). Local small-business owners in North Park don't always own the property in which they operate. It'll be interesting to see how the property owner landlords in the targeted location react.

Anybody who is part of this settlement, I expect to see a few times a week with a sack picking up trash (like I did back to the 1980s in South Park), because they killed off a program that was keeping things cleaner than they are now. Some businesses also need to step up and start policing the trash in front of their business better (yes, Starbucks, I'm looking at you).

Most of the South Park residents I know are so glad that the illegal MAD was done away with. Many thanks to the lawyers and residents who worked so hard to defeat it. I'm so grateful that the legal fees will finally be paid (hopefully). Let's hope the City will stay out of our pockets in the future for any further unnecessary taxes. Our neighborhood is beautiful as is!

Hey Hardcover, The PEOPLE didn't kill off anything: the courts did, because the MAD was created totally outside the law. If you believe that twisting the law into knots to serve your personal preference is OK, then go work for the city and Jan Goldsmith.

If you want to spend what you were paying on your assessment, you can always donate money to Starbucks or other businesses. Just ask them to use the $$ to hire sidewalk cleaners and to place decorations outside on the streets in front of their stores.

Oh yeah: it's not a "settlement": the city lost a lawsuit and has to pay attorney costs. They fought that and lost that, too. If this were a "settlement," say, for "damages" (as incorrectly reported by Dotinga in the Voice), the compensation would be much, much larger.

There's another error in VoSD's report on the MAD lawsuit: the author stated "The city has 55 of these funding schemes... ."

NO! NO, no, no. It does NOT. It has 55 assessment districts of another type, totally distinct in every way, most importantly in their legality.

The property owners in Greater Golden Hill were the only property owners, out of 8 other neighborhoods that have the same kind of illegal district, to fight the illegality. So, to report correctly,

"The city [now] has 8 of these funding schemes [remaining]... " and they are all illegal.

Li Mandri's own neighborhood (he lives near Jerry Sanders) is probably the only place where he hasn't tried to form an illegal assessment district.

Li Mandri has tried to change the terminology of his illegal money-raking districts by calling them "community benefit" districts, loathing to remind people that the districts involve property tax assessments.

There is no California state law for "community benefit" districts. Li Mandri's creations are illegal because they mix up, selectively, parts of the laws governing two legal formation processes and restrictions for assessment districts (one for Landscape and Lighting Maintenance Assessment districts, the other for Property-based Business Improvement Districts).

Li Mandri has tried to get Vargas and Atkins to pass a new state law for "community benefit" districts:

*He wants residential property owners to pay assessments in a district that primarily benefits and is managed by businesses (not legal in PBID law).

*He wants residential property owners to pay assessments that can be spent on ANYTHING he calls an "improvement" (not legal in MAD law: the money has to be for a specific capital improvement and its maintenance).

*He wants a law that doesn't require 50% of property owners' initial support by petition (PBID law requires this to legally proceed to a ballot).

*He wants a law that forms a district with such a long lifetime that few property owners would live long enough to vote again on renewal (PBID law requires a renewal vote after the first 5 years, and every 10 years afterward). His 8 illegal districts in San Diego have NO sunset - they last forever, as do legal MADs and as would have the illegal GGHMAD/PBID hybrid, if not struck down by the court.

Good riddance, illegal MAD! It's been educational, however unpleasant.

South Park and Golden Hill are looking and doing just fine. We don't need private caretakers dipping into our pockets and running our neighborhoods.

It's about time.....actually it's too late for Hal Tyvol who died.....he was the original lead attorney. Mr. Tyvol was the man who worked tirelessly....researching and preparing the case that was successfully carried out by Mr. Haskins and Mr. Khoury. I agree with all the posted comments except for Hardcover. Thank you to all who supported the people of Greater Golden Hill.