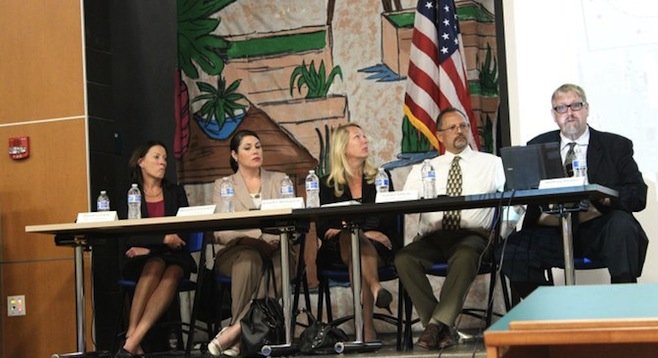 The San Ysidro Smart Border Coalition (SYSBC) held a forum on May 14 in the Willow Elementary School auditorium to discuss the anticipated spring 2016 opening of a new pedestrian border-crossing at Virginia Avenue.

The border coalition was founded in 2007 by eight organizations, including the San Ysidro Chamber of Commerce, Casa Familiar, and Hearts & Hands, in order to give the community a voice in the federal General Services Administration’s massive reconfiguration that's now taking place at the San Ysidro Port of Entry, the busiest land border-crossing in the Western Hemisphere, if not the world (depends on the source).

In particular, the border coalition worked with the General Services Administration to include a northbound and southbound pedestrian-crossing at Virginia Avenue.

Coordination in the planning of the crossing has required participation from two countries, three levels of government (local, state, and federal) as well as several agencies. Both Mexican and U.S. representatives attended the May 14 forum, which was meant to celebrate the multiagency coordination.

Councilmember David Alvarez gave the opening remarks, saying, “There are a lot of opportunities — yes, absolutely, with this Virginia Avenue, but also some potential pitfalls and some potential concerns that we all have. So I hope that today this is what it’s about and it’s probably the first of several conversations.”

“It is initially going to be a ten-lane facility, eight dedicated northbound and two reversible lanes," said Kleppe. "Included in the design is a little plaza area outside the entrance.”

A Q&A followed his presentation and many audience members stood in line, waiting to comment on topics that included whether bike lanes would be available and why the architectural design looked so unappealing.

Barry Simon, a property owner in San Ysidro, said, “We need to have a world-class facility here.” He went on to point out that San Ysidro will be losing a significant amount of public parking. However, due to the city’s height restriction that limits buildings to no more than 30 feet tall, he won’t be able to make up for those lost spaces.

Thomas Currie, president of the San Ysidro Chamber of Commerce, said, “This is a road-stop bathroom. That’s what it looks like. The community deserves better.”

Kleppe next presented an additional transit center that the General Services Administration will design and construct on the west side of the port of entry. The project will be undertaken in coordination with Caltrans, the San Diego Association of Governments, the Metropolitan Transit System, and the City of San Diego. The total funding allotted is $8 million, with Caltrans providing half of that funding.

The transit center, also estimated to be completed in spring 2016, has not yet been designed.