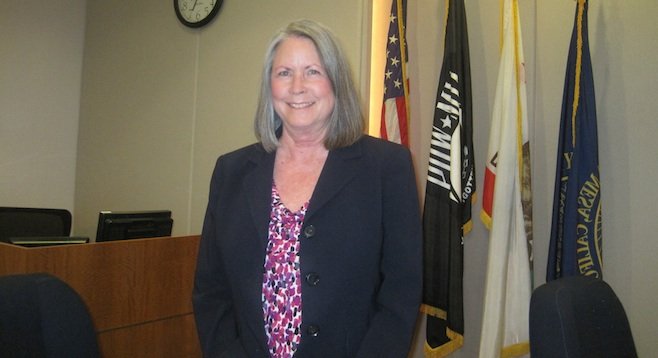 The La Mesa City Council on May 13 voted 4-1 to place a measure on the November 4 ballot that asks voters to change the city clerk from an elected position to an appointed one. Mayor Art Madrid cast the dissenting vote, saying it denied the voters' right to express their choice.

Voters in November will also elect a mayor, two councilmembers, and decide whether to set term limits for those offices.

City clerk Mary Kennedy said in a May 15 interview that the Registrar of Voters notified the city on May 13 that the La Mesa Term Limits Committee's petition drive yielded the 3306 signatures needed to schedule a vote on the "Three Consecutive Terms Limit" ordinance.

Kennedy, who was re-elected in 2012, advanced from deputy city clerk to city clerk in 1998. Rather than hold a special election that year, the council interviewed candidates and appointed Kennedy to finish the previous clerk's term.

The issue of appointing the city clerk was put on the agenda by councilmembers Ruth Sterling and Ernie Ewin.

Sterling said that while the city clerk's duties increased since La Mesa incorporated in 1912, the requirements for that position haven't changed. The clerk must be a U.S. citizen, La Mesa resident, registered voter, and at least 18 years old. (Madrid said later that those were the requirements for any elected office in La Mesa.)

Ewin said voters don't elect the police chief, and "the city council hires one person, the city manager." That "person is in the best position to manage" hiring.

When asked by Ewin, Kennedy said she supported the proposal because it treats her position like others at the department-head level.

Madrid objected to "taking the voters' right away.… The next thing you know" residents won't vote for mayor, and there will be "district elections although [La Mesa is] only 9.2 square miles." Madrid, who plans to run for re-election, served on the council from 1981 until he was elected mayor in 1990.

The issue of a non-elected mayor came up at the November 12 council meeting. Term-limits opponent Kristin Kjaero spoke about making a public-records request about "people looking into the possibility of making the mayor and city clerk non-elected positions."

When I asked who was involved, Kjaero said she was making the request to find out.

Russell Buckley asked in an October 24 email why the city clerk was an elected position.

Kevin George's October 29 email asked why the clerk and treasurer were elected. He also wrote, "We have observed that many cities have a floating mayor, with the position rotating among councilmembers." He asked, "Who or what has jurisdiction/ability to change" those situations?

Those situations require ballot measures when the offices of city clerk and mayor aren't on the ballot, Witt wrote in his responses and in an update to the council for the week of October 28 through November 1.