Eucalypti, your time has come

Eradication ongoing — as are arboreal hazards of Oz native 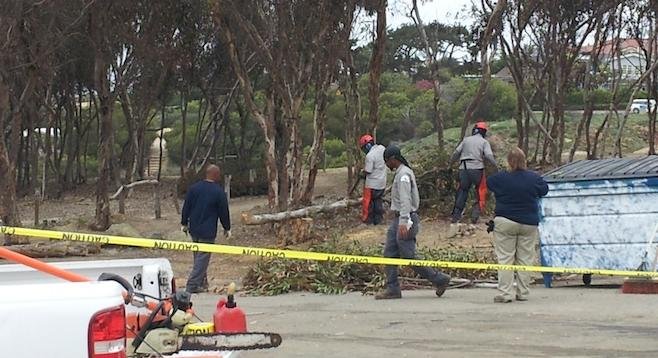 The California gold rush didn't only bring myriad fortune-seeking people to the Golden State. It also brought trees. Specifically, an Australian species very familiar to anyone who lives in San Diego: the eucalyptus.

However, nearly as common a sight as the tall trees of peeling light gray bark are the stumps of eucalyptus trees left behind by attempts to get rid of them. A few new stumps were added to the landscape at Sunset Cliffs Natural Park last month, where a Park & Recreation crew brought down several dead or dying eucalypti, part of a growing grove of stumps amid trees that have found the park a great place to flourish.

Flourish may be an understatement. Actually, eucalyptus trees tend to dominate the soil wherever they grow. According to Mike Marika, the city's park arborist, eucalypti are particularly adept at negative allelopathy, the "inhibition of the growth of one plant by another, usually through chemical compounds released into the soil environment." In other words, they literally try to stop other trees from growing around them.

They're also tolerant of higher levels of salinity than most trees, which explains why so many found purchase beside the fragile sandstone cliffs that give Sunset Cliffs park its name. 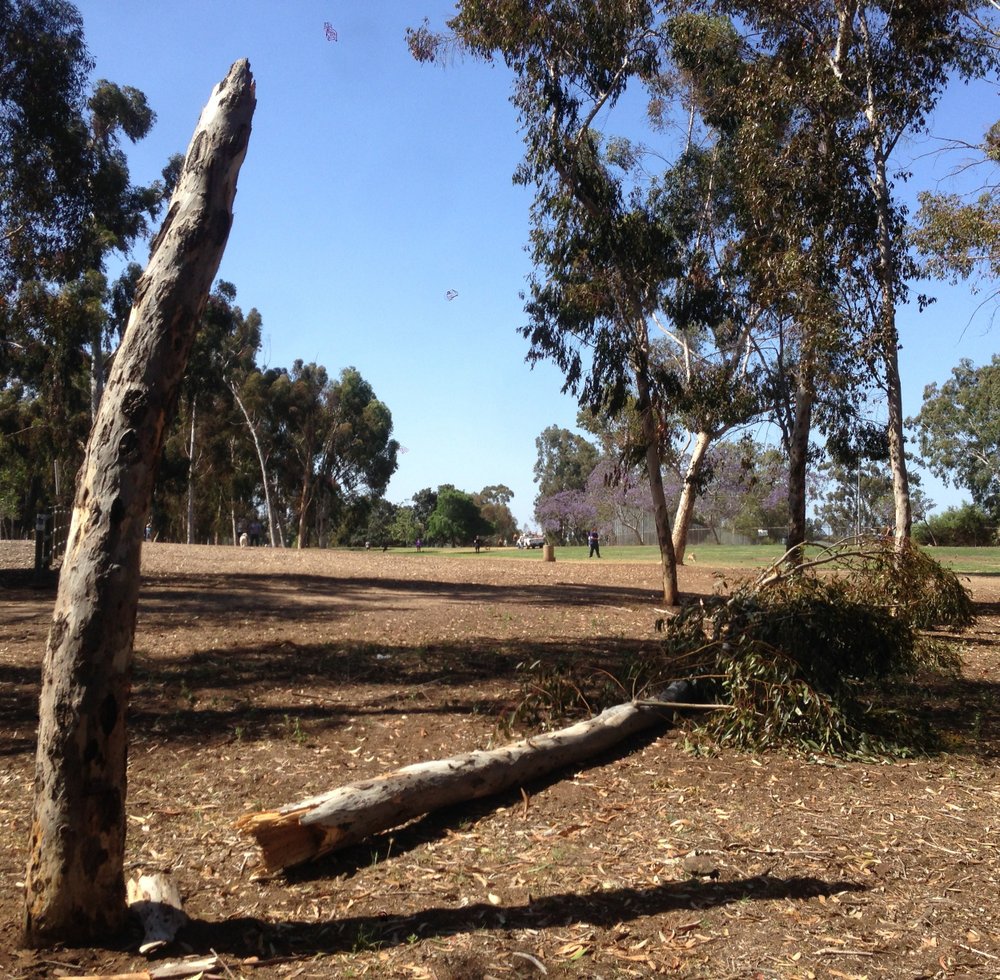 Problem is, like the cliffs themselves, eucalypti tend to fall apart unpredictably, throwing branches and in some cases toppling over in high winds, or by caprice. Several instances of this were recently witnessed at Grape Street Dog Park, including branches up to 20 feet long and approximately a foot in diameter.

Eucalypti boast dense, resinous wood, so when they fall, they fall hard. While decades-old trees, grown from seed, may possess great durability, young trees do not, and according to Marika, can grow exceedingly fast, up to ten feet per year. Furthermore, eucalypti may grow from root sprouts, producing trees that tend to be less structurally sound. He says this is the case with many eucalyptus trees found around city parks, a result of many of the so-called "nuisance" trees being felled decades ago.

"The trees were cut down, the brush removed, the wood was hauled away, and the root stumps were forgotten about," he says, "only to sprout back, forming weakly attached, poorly structured trees prone to failure at an unpredictable time." He adds, "These maturing trees should be pruned biannually or at least looked at by someone who is familiar with their growth and nuances."

Granted, eucalypti aren't alone in requiring such attention. Just as many park resources are routinely used to trim palm trees (another nonnative species), and during a recent spate of high winds, Marika says a number of ficus, pine, and silk oak also lost branches.

As for the recently cut trees at Sunset Cliffs, parks district manager Daniel Daneri speculates the recent cuttings may be due to a beetle called the longhorn borer, which also hails from Australia and thrives on the eucalyptus, with infestation leading to a greater chance of collapse and lost limbs.

Exacerbating this problem, according to information provided by the Statewide Integrated Pest Management Program at UC Davis, is that such beetles tend to be attracted by "Freshly cut wood, dying limbs, and trees suffering from stress, especially drought stress."

Like the drought we're in. Marika says longhorn borers aren't typically found so near the coast, though their presence in the region has been documented for years.

Daneri says park supervisors have the authority to cut noticeably dead or dying trees. In fact, the Sunset Cliffs Natural Park Master Plan, issued in July 2005, calls for the "eradication of exotic invasive plants and a revegetation program for restoring native vegetation."

Which means, eventually, the eucalyptus trees of Sunset Cliffs should disappear altogether. As long as the stumps don't grow back.

The trees are quite flammable. Says Wikipedia: "The 1991 Oakland Hills firestorm which destroyed almost 3,000 homes and killed 25 people was partly fuelled by large numbers of eucalypts close to the houses."

It's the oil that makes them so flammable

I recall that Oakland fire, and something about the description didn't add up. One thing we all need to remember is that "Eucalyptus" isn't a single species of tree. It is a far greater thing than that, and there are literally thousands of species that are eucalyptus trees. In Australia they occupy all sorts of biological niches. So, some of them look like willows, others look like cottonwoods, etc., etc. The variety we see most of the time in SD is one with the common name "lemon-scented gum'." The other one that causes problems is the one planted by the railroads during their ill-fated attempt to use for railroad ties. That one is the smelly one, and probably oily one, that you'll find around UCSB and Isla Vista. That was likely the sort that was in the Oakland Hills.

Locally we had major problems with them in the Cedar Fire, where it blew into Scripps Ranch. But many of those were dead and others were dying at the time. Just be aware that they get a bad rap here for all sorts of things. Yet people planted them a long time ago because they would grow, thrive, and provide shade. And they are still being planted. I'm of mixed emotions about the darned things. Yes, I'd prefer to see oaks and sycamores, but those don't always do so well here where they are native.