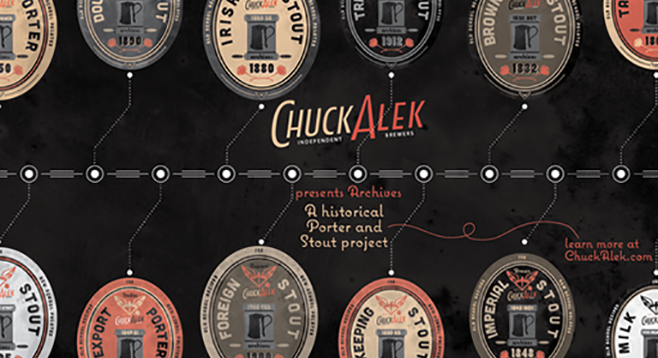 It’s hard to believe in sunny, IPA-geared Southern California, that stouts were once the leading style of beer produced. Porter beer was particularly popular, eclipsing all styles in popularity across The Pond. Looking to trace the history of porters and stouts, and in the process, celebrate sub-styles that have fallen out of favor or significant production, Chuck Alek Independent Brewers (2330 Main Street, Ramona) is in the midst of a year-long program called “Archives.”

Archives, which started in January, entails ChuckAlek brewing and releasing a dozen specialty beers on a monthly basis. Beers brewed to-date include a running porter, double stout, Irish-style stout, and triple stout. A brown porter is next up, and will be followed by a table porter, pale stout, export porter, keeping stout, imperial stout, and milk stout. All of those beers will be produced at ChuckAlek’s Ramona brewery.

Related, but supplementary to the Archives series, a special clone of 1867 Barclay Perkins Export India Porter was collaboratively brewed yesterday at Stone Brewing World Bistro & Gardens – Liberty Station. Stone brewmaster Mitch Steele lent his talents and elbow grease with assistance from a special guest, noted beer historian Ron Pattinson. Pattinson is the author of The Home Brewer’s Guide to Vintage Beer, and contributed major input to a number of the recipes for the Archives series.

The Archives beers will be available at ChuckAlek’s tasting room as well as a limited number of beer-centric watering holes throughout San Diego County—Monkey Paw Pub & Brewery, Plan 9 Alehouse, and Urge Gastropub.