Too much Grand Theft Auto?

Reckless driver in speeding truck knocks over tree, runs away 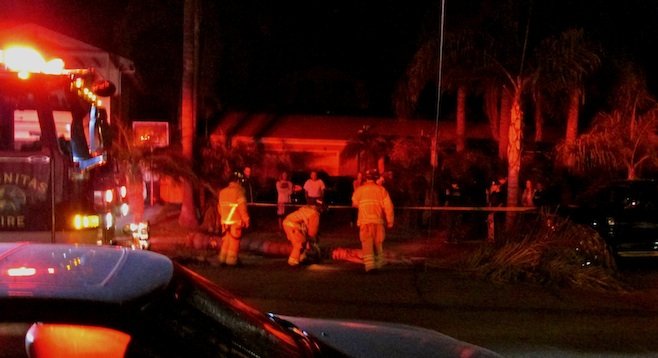 Encinitas sheriff’s deputies were on the lookout for a silver Nissan Titan truck with Mossy Nissan new-car plates on the evening of May 12. Shortly after 8:30 p.m. they found it, missing a large part of its front grill and radiator coolant.

Just before 8:30, two people talking on the side of Ruthlor Road witnessed a fast-moving vehicle in Cardiff’s Poinsettia Heights neighborhood, just east of I-5.

The truck accelerated toward them, turning off its lights. “It’s as if he wanted to play chicken with us,” said one of the witnesses. The truck sped past them. One of the neighbors tried to give chase to get a license-plate number but was out-run.

The truck was heard going around the block. By the time the truck had almost made a full circle, a resident on Edwina Way was already talking with a 911 CHP dispatcher. Reportedly, the dispatcher said she could hear the squealing tires in the background.

As the truck made a high-speed turn off of Edwina Way back onto Ruthlor Road, he hit a palm tree in front of the home at 1635 Ruthlor Road. As the tree fell, it snagged and brought down the home’s cable-TV line.

The truck backed up and again squealed through the seven-street neighborhood before exiting out to Birmingham Drive. One could follow the trail of leaking coolant around the streets until it dried up just before Birmingham Drive. Neighbors speculated that the driver was getting more agitated as he drove around, unable to find his way out of the neighborhood.

The Encinitas Fire Department and sheriff’s deputies arrived shortly. The deputies took off quickly after getting a description of the vehicle. They didn’t have to drive far. According to one deputy, it only took about nine minutes to locate the abandoned vehicle on Villa Cardiff Drive. An investigation is underway.

As the crowd of 25 watched the fire department disable the cable line and cut up the fallen tree, the best quotes I heard were; “Someone’s been playing too much GTA [the popular and realistic video game Grand Theft Auto],” “Must have had a bad break-up,” and “It may not be a full moon but it’s full enough for crazy.”