Hillary is coming to town — awkward! 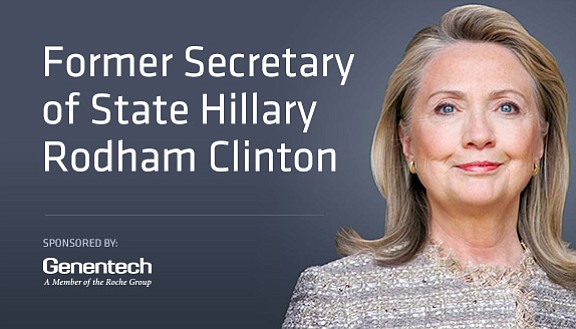 The 2014 BIO International Convention, to be held at San Diego's downtown convention center June 23–26, has announced that the keynote speaker will be ex–First Lady, former Secretary of State, and presumed presidential candidate Hillary Clinton.

"Her 'smart power' approach to foreign policy repositioned American diplomacy and development for the 21st century," says a May 14 news release from BIO, a Washington influence-peddling and trade group for biotech special interests.

"Clinton played a central role in restoring America’s standing in the world, reasserting the United States as a Pacific power, imposing crippling sanctions on Iran and North Korea, responding to the Arab Awakening and negotiating a ceasefire in the Middle East.

"Clinton also worked to provide health care to millions of children, create jobs and opportunity, and support first responders who risked their lives at Ground Zero. In her historic campaign for President, Clinton won 18 million votes."

An email invitation to the keynote says it is "sponsored by Genentech, a Member of the Roche Group."

The Clinton visit follows by just a month a La Jolla stop by Barack Obama, who raised political money at the mansion of Qualcomm founder and billionaire Democrat Irwin Jacobs, who has already announced that he and his wife are backing Clinton for president by giving big money to a group calling itself Ready for Hillary.

So far, at least, no Clinton money-raising activities have been announced for San Diego, but that may change.

The night of Clinton's June 25 speech, Bio International is set to hold a large party in the Gaslamp Quarter, similar to the one it threw during its last convention here in 2008.

Katherine Stuart, wife of GOP mayor Kevin Faulconer and president of Restaurant Events, handled the ’08 bash (when Faulconer was a council member) and will handle this year’s. The company relies on the good will and cooperation of city officials in closing off streets to the public at no charge.

As reported here, Stuart has made big bucks on the block-closing parties, which have been overseen by special-events chief Carolyn Wormser, recently named by Faulconer to take charge of next year’s Balboa Park centennial celebration.

In a personal financial disclosure filed with the city during the mayoral campaign, Faulconer said that Restaurant Events was worth between $100,000 and $1,000,000 and had a gross income of over $100,000.

"Well, BIO '08 is over and wrapped up, and I want to thank you for your tremendous assistance in making our Gaslamp Street Party a resounding success!" says a quote from a BIO 2008 employee posted on the Restaurant Events website. "Without a doubt, you know how to make this happen!"

The matter of setting fees for such events has long been a subject of city-hall intrigue. As of this February, the fees, the amount of which had been left to Wormser’s discretion, had been eliminated altogether by the city. A spokeswoman for acting mayor Todd Gloria said a future examination would determine if and when they would be reinstated.

"The city plans to conduct a comprehensive review of all rates and fees for review and approval by the City Council within the next year," said an email from Katie Keach. "As part of this effort, the Special Events Department intends to evaluate and propose a fee and rate structure that addresses events hosted by commercial and non-profit entities."

When we talked by phone with her before the mayoral election won by Faulconer against Democrat David Alvarez, Stuart advised that other consultants, not her firm, had conducted past fee negotiations with the city on behalf of her clients. She said she was aware the fees were no longer being levied but professed no knowledge of the city's plans for the future.

So far, no further fee action has been announced. We have an email in to mayoral aide Matt Awbrey regarding the fee status.

Meanwhile, this year's big BIO party is on schedule. In a December 19, 2013, memo to Gaslamp Quarter property owners and tenants and merchants, Stuart wrote, "This is a private event for 3100 attendees. Every measure will be taken to ensure as little inconvenience as possible to the businesses and tenants."