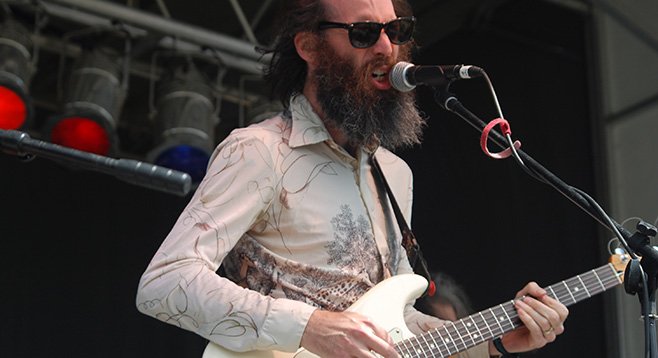 Asked the origin of his signature stage move, combining an upstrum with a backwards stagger, Howlin Rain’s Ethan Miller specifies: “You gotta try and let yourself be natural and find some natural swing...with your playing. Then, you can amplify that stuff, exaggerate the physicality to express the intensity, just like they do in dance and theater performance. Elvis understood that with his hips, hair, and outfits, Pete Townshend knew that with his windmills, Tom Jones with his whole ‘I’m gonna f--k all you ladies’ thing. Hendrix and Iggy Pop obviously got it to the extreme...it’s Theater 101.

“The trick is trying to forget you’re exaggerating and simply be inside of a heightened existence up there — be larger than life on stage. So my upstrum/backwards stagger thing is just an amplified expression of me trying to rip the pounding bleeding heart out of my guitar and throw it in the face of the whole f--king world.”

Miller, who brings Howlin’ Rain to the Casbah on May 20, recalls his previous trips to SD: “One of the early times was with Sonic Youth at the House of Blues. Good reception! Casbah, the Griffin, some old bar down in Ocean Beach...it’s always fun. I can’t remember a time in San Diego that I hated.”

The band’s first-ever live album, Live Rain, came out a few weeks ago. Miller on live performance versus studio takes: “They all change because songs have two lives to make them work, and it’s pretty rare that one face/one life will work in both places. There has to be little tweaks, little changes to make it as happening live as on record or vice versa. As we speak, I am still putting the set together and finalizing some arrangements for this upcoming tour, so I’m not sure exactly which songs will be the most ‘changed.’ But because there are no former players in the group but me, I guarantee it will all be a little different.”