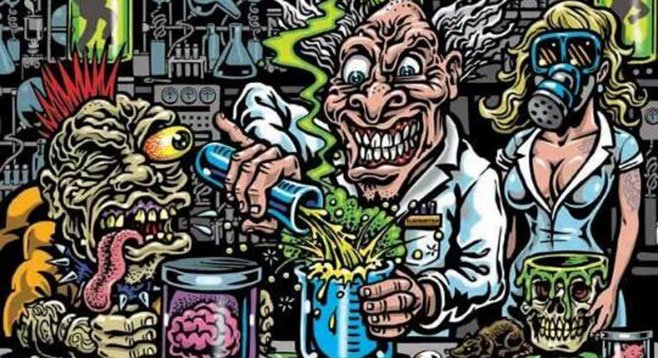 It seems the days when surf and skate companies could be counted on to help local bands are coming to an end. Last year, Volcom folded its record label it ran for 18 years, leaving bands like Turbonegro and Torche to find new labels. While other action-sports companies, such as Osiris and Sector 9, have scaled back their commitments to help local rockers tour, record, and promote their music.

Chris Haygood, a 1996 Rancho Bernardo High grad, recalls the days in the ’80s and ’90s when local punkers were given big love from the surf and skate business.

“The punk scene was thriving. That was when you could see Unwritten Law and Sprung Monkey play with Pennywise and NOFX at the original SOMA downtown for five bucks. [Filmmaker] Taylor Steele had a huge impact when he used their music in his surf movies. The big companies like Quicksilver and Osiris figured out that punk rock and action sports could be a perfect fit. That’s gone. Everything seems to be dismantled. The scene, especially in San Diego, seemed to die.”

Four years ago, Haygood and two longtime buddies who weren’t so sure that the punk and action-sports marriage was dead founded Slabratory Clothing. They hooked up with Santa Cruz Skateboards artist Jimbo Phillips, who created their mohawked skull logo and the low-budget, garage-based clothing company was born.

Slabratory doesn’t have an office or a warehouse. “We are a home-based business. We like the underground. There is no corporate action-sports company behind us.” The Slabratory owners have day jobs in the restaurant/bar industry.

Slabratory has no sales rep. They use live shows and the internet to sell their stuff.

They pressed a 52-song, double-CD compilation earlier this year called Sick Slabs of Sonic Sound From the Slabratory, featuring SoCal bands Strung Out, RKL, the Darlings, and Voodoo Glow Skulls, as well as San Diego bands the Neighbors, Death on Wednesday, and Agent 51.

“We wanted to try and recapture the scene we grew up with,” says Haygood.

Slabratory printed an initial 1000 copies of Sick Slab and plan to print their next 1000 next month, handing them out for free at the punk shows they produce.

I suggest that hip-hop music is often the preferred boombox fare at local skate parks.

“Our niche has always been the hardcore skaters — punkers and metalheads,” says Haygood. “We’re into the underground stuff you won’t get on radio or TV.”

The next Slabratory show is May 30 at the Soda Bar, featuring Thousand Watt Stare, the Implants, and Castoff.

Wait, you can publish that cartoon and not be accused of sexism?