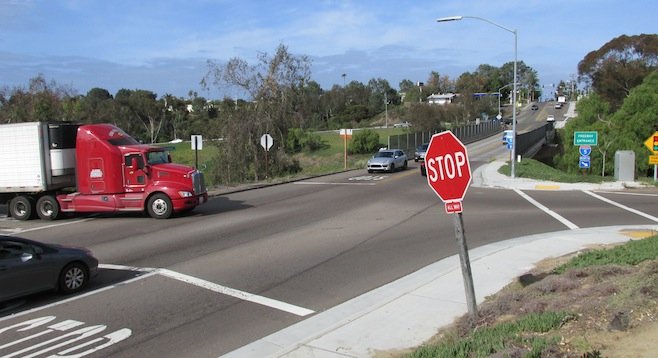 Caltrans has announced future improvements to the Birmingham Drive/Interstate 5 interchange in Cardiff by the Sea — roundabouts, rather than traffic signals.

The Birmingham Drive exits are the last remaining I-5 interchanges that don’t have traffic signals. Motorists have to practice their rights-of-way knowledge when quickly getting off either the northbound or southbound off-ramps. During the morning and evening commutes, drivers are delayed while awaiting their turn and traffic backs up.

Rather than expensive signals, which lead to increased congestion (a problem compounded by the southbound off-ramp location of the Encinitas fire station’s signals), Caltrans put forward last week the idea of installing roundabouts as a possible solution.

Following its reputation as the “Flower Capital of the World,” Encinitas is becoming known as the “Roundabout Capital of California.” Three roundabouts are already in use: two on Leucadia Boulevard and one of Santa Fe Drive, with five more planned on Coast Highway 101 from A Street to La Costa Avenue.

Interviewed on May 8, local motorists at the exits’ three gas stations commented on the roundabout plan for the heavily used Birmingham Drive. One described it as an “accident waiting to happen.”

Hugo from Cardiff questioned the narrowness of the Birmingham overpass, which was built in 1964. He thought the bridge would be too narrow to handle all the morning commuters coming through the proposed traffic circles. Semi trucks and RVs also use the exit to access Coast Highway 101 and the San Elijo State Beach campground.

Others said they felt most drivers do not know how to use roundabouts. That may be true, as the DMV did not include roundabout driving rules in the California Driver Handbook until 2010.

The complete roundabout vs. signal analysis was conducted for Caltrans in 2009 by Wilson and Company. Traffic-volume projections for the interchange were calculated up to the year 2030; that’s the projected completion date of Caltrans’ I-5 North Coast Corridor widening project from La Jolla Village Drive to Harbor Drive in Oceanside.

The exhaustive study appears to add bike lanes and sidewalks, and requires the taking of little sections of land from the Valero, Chevron, and USA gas stations, and Caltrans’ Park N Ride facility. However, as projected, no closure of those businesses would be needed. The Cardiff fire station, on the freeway’s northwest corner, was built in 2011. The interchange and freeway expansion were taken into account in its site plan.

Hope the roundabouts work there. Caltrans definitely needs to do something at that Birmingham/I-5 interchange. Everyone who lives in Cardiff funnels in and out of that one interchange. For whatever reason, very few residents use the Santa Fe interchange, which flows a little better, as an alternate.