Siem Reap: my gift in the jungle

Once-in-a-life experience off the tourist track. 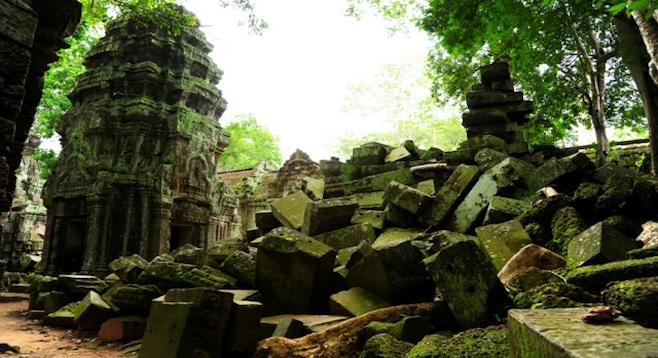 I've always found travel to be its own reward, but on rare occasions it also gifts some of us with a life-altering experience.

While visiting friends in Siem Reap, Cambodia, I hired a tuk-tuk driver named Thom to take me into the jungle to see temples most tourists miss.

We went a little further off the beaten path each day until he realized I was pretty much up for anything, and so he asked if I would like to see his village – an offer I couldn't refuse.

We left the main highway and began bumping along a dirt road that eventually became not much more than a footpath carved out of the brush by machetes. We passed people on motorbikes with large pigs strapped to the back on their way to market, and a decades-old auto that no longer ran, being pulled by a water buffalo. It was the local taxi service. People not only filled the car, but were hanging onto the sides. We passed old women, backs bent under loads of firewood with teeth stained black from chewing beetle nut, while little children ran alongside us, reaching out to touch me. 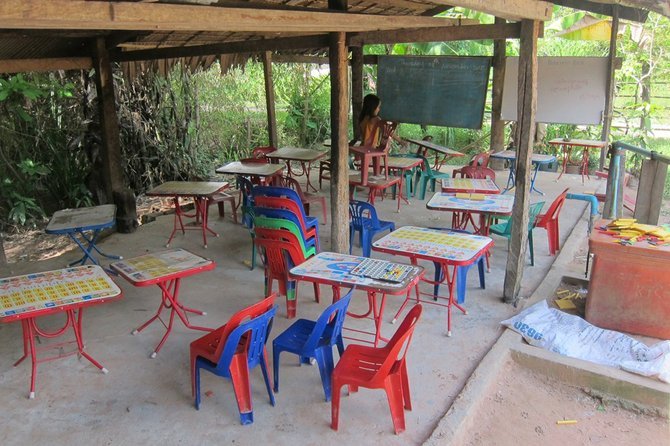 Jungle school before the author arrived...

Like Alice going down the rabbit hole, Thom had delivered me from the current century to a place back in time, to a Southeast Asia that is rapidly disappearing. An Asia I wanted to see. 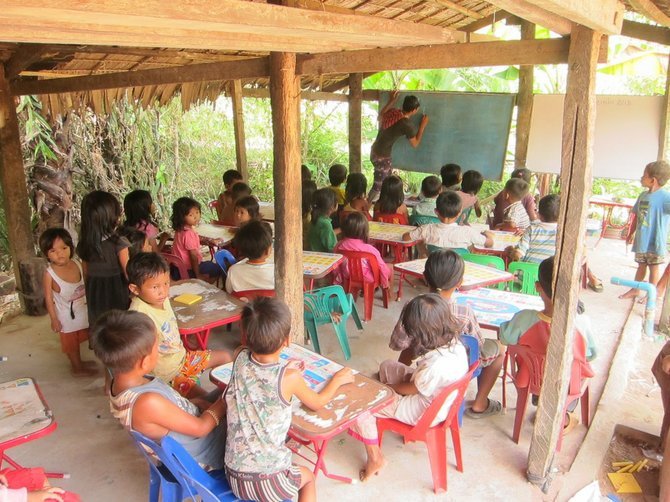 ...and five minutes after.

We pulled into a clearing with a few scattered huts and what looked like an impromptu classroom under a veranda: a black board with a few plastic chairs. The jungle telegraph had announced my arrival as children were appearing from all directions, taking seats and watching me. I was completely caught off guard by this reception when suddenly Thom said, “You teach them something please?”

I had been blindsided, but was not upset. I realized this to be a great honor.

This village was as isolated as people could be in the modern world, surrounded by predators and countless land mines. In a country that has known 2,000 years of war, I'd met so many people like this for whom a formal education was simply not an option. The arrival of someone from the outside world was an opportunity for knowledge that I felt obliged to supply, regardless of my limitations.

I drew a large outline of the United States on the blackboard and pointed to where I came from but there was no response. Next I drew an outline of an airplane and pantomimed flying, but they did not understand that either. Finally, with Thom translating, I told them I had come from far away after many days of walking, and that registered.

It also opened the flood gates as the children began firing questions at me as fast as Thom could translate, questions that intrigued me as much as my answers did them. What does cold feel like? How do people fit inside a television box? Are all outsiders wealthy and how many cattle did I own? Why were my children not with me? I realized their knowledge of the outside world came to them only through trekkers such as myself. Standing there in the jungle, I pondered these perceptions of life that had never occurred to me before as I tried to enter their minds. These children made me think outside my own comfortable box.

Time stood still in that clearing until shadows grew long and Thom said we would have to leave. As I got up, all the children stood and bowed with clasped hands, the traditional Khmer greeting and thank-you. Many of them approached me with bowed head, a sign of respect for an elder, and I laid my flat palm on top of each in another traditional blessing.

Before getting into the tuk-tuk, Thom embraced me in a bear hug, thanking me for what I had done, but I told him it was I who needed to thank him for the kind of day this traveler prays for. I don’t know how much the children actually learned, but I will never forget the smiling faces as we left.

A few weeks later I got an email from a lady who knew Thom. She worked for a church group that ran schools in the Cambodian jungle and wanted me to know about her new students. It seems that a few days after my visit, a girl and her family showed up after walking many miles. Over the next several days a total of six children arrived to attend her school for the first time.

Each of them said they wanted to learn about all the things the American man had told them.

For that feeling, I have no words.