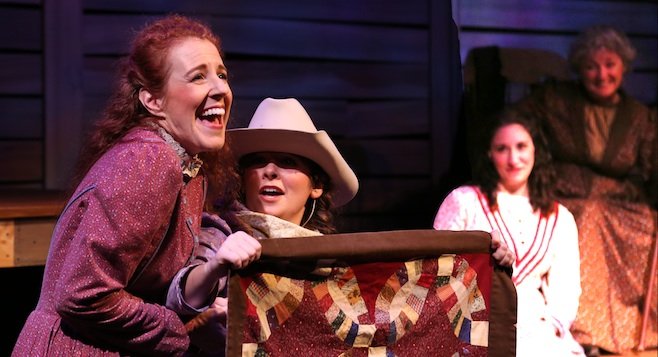 Sarah McKendree Bonham, who came west in a covered wagon, hasn’t long to live. Aware that, as the bible says, most of a woman’s work “perishes in the using,” she decides to make a “legacy quilt”: tell her story and the untold tales of women on the frontier.

According to Patricia Cooper and Norma Bradley Allen’s The Quilters: Women and Domestic Art, quilting united pioneering women. “Hail ruins the crops,” one says, “fire burns you out. And you’re just given so much to work with in a life and you have to do the best you can with what you’ve got.”

They constructed quilts — a “useable art” — from snatches of calico and denim. One of the most interesting parts of the book and the Molly Newman/Barbara Damashek musical: the emphasis on craft. How you stitched told who you were. Masters like Sarah Bonham could do eleven in one inch. The expressive, often starburst-patterns and intricate stitching were the maker’s mark.

They also provided a sense of order amid an often chaotic landscape.

Quilters has humor, as when the too-green boards of a newly built cabin warp in twisty-squeals and sound like the world’s coming loose; and hardship: blizzards, prairie fire havoc, the relentless cycle of giving birth every nine or so months — and the guilt-wracked thought of preventing the next one.

Although the musical’s about quilting, it attempts a panorama of the Old West. The format resembles a musical revue, vignettes loosely held together by a theme. Many are short, and many don’t end; they fade into the next one.

In the long run, the build-dissolve, build-dissolve format has a wearing-down effect. One wishes its creators had done what the quilting masters did: pull out the shoddy blocks and showcase the strongest.

Lamb’s Players staged Quilters in its original, National City space in the early '90s. That production was determined to endear: silver linings swept the clouds away. Lamb’s current version shows how far the company has come. Director Robert Smyth achieves a much better balance between humor and hardship and solves many, but not all, of the book’s troublesome patchwork. The show feels longer than its running time.

Smyth and choreographers Pamela Turner and Deborah Gilmour Smyth keep things alive — not just in the dance sequences, which often include flowing cloth. The movement overall connects the various blocks with wheel-like, patterns of weaving.

Led by Gilmour Smyth’s clear soprano, the cast has uniformly strong voices. Backed by a five-piece, country-style band, they give every song its due. Thanks to musical director G. Scott Lacy, the choral numbers impress (especially James C. Moore’s “Land Where We’ll Never Grow Old”).

Nathan Pierson’s lighting evokes moods and terrains on Carrie Sefic’s rustic, wood-planked set. Jeanne Barnes Reith’s calico dresses have a quilt-like color scheme. But given the mud and rain and roiling rivers that assault them, they need more grit.

Wait! In the floor-length yellow dress — isn’t that Lucia Vecchio? She received a Craig Noel Award for “Outstanding Young Artist,” not that long ago. Now she’s on a prominent local stage doing more than holding her own!