He works for McDonald's — he is our spy

Watch out for tow trucks in P.B. 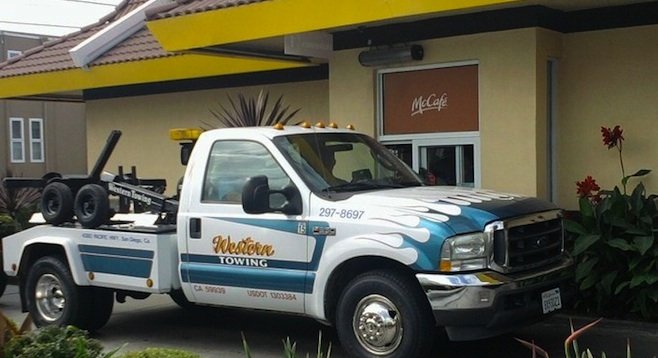 On March 7, 6:00 pm, as she left the dining room of McDonald's in Pacific Beach, a middle-aged woman named Irma caught a man spying into her empty car with a flashlight.

As she reported this suspicious behavior to the lead McDonald’s cashier, the man in question, named Frank, came into the restaurant and sat at an adjacent table in earshot.

The employee explained, “He works for McDonald's … he is our ‘spy’, I mean he is a ‘scout.’

A customer, J.C. Playford, jumped up from his table and interrupted: “I work for the news … are you saying McDonald's hires a spy for towing cars?”

The employee: “He actually works for Western Towing, I mean … umm, I know he gives us a copy of the completed paperwork.”

During the last six months I have observed this situation often, and every time the parking lot was almost vacant. Another evening, two ladies from Germany were protesting to the night lead that they were not parked over an hour in the lot. One explained: “The sign says ‘1 HOUR PARKING FOR CUSTOMERS’. After we ate we saw the sign and I told my friend, ‘We have 20 minutes yet, show me those shoes in the window just a few doors down.’ Actually, I made a phone call when I was in line to order … let me show you the time on the phone.”

After showing him the time, she repeatedly asked him if he was going to return their rental car right away. The lead employee kept repeating the same answer: “You have to call Western Towing.”

Another diner, Anthony, a 28-year resident of Pacific Beach, offered his experience to the tourists: “Most of the people out at restaurants at night in P.B. are college students from out-of-state or tourists. It is ripe for a scam. Neither one wants to waste the time to 'fight the system' while they are temporarily here. The tourists are just plain clueless. If their rental car gets towed, they just stand to be automatically victimized for $325 on their credit card. At the Belmont Park shopping mall, like downtown and Hillcrest, the city has failed to provide the necessary parking garages, so parking for tourists can be a nightmare … and we need to get that lost tourist dollar back.”

I have taken pictures of the vehicles being dragged out of the lot on seven occasions. On one occasion, my friend Aaron Massman was waiting in his vehicle to pick me up. He was in the lane in the middle of the lot. Unbeknown to us, he had the partially blocked the car of the next tow victim. Spotting the tow truck swooping in, I went over to videotape the McTow. The driver exchanged something folded up for the Tow receipt as they chuckled. The driver jerked the vehicle over an eight-inch-high median to get it out quickly.

Aaron, who is a mechanic, stated: “That can’t be good for the alignment … front or rear.” I interviewed a tow driver who worked for a La Jolla tow company. He stated that is illegal to tow vehicles without the safety chains and the portable brake lights, even for a block. He admitted that the ‘Hook & Fly’ method is not an uncommon technique with apartment buildings where the vehicle owner is likely in the vicinity.

A gentleman named Guy, one of the restaurant’s most frequent customers for over 30 years, bumped into friends while dining and when he went to leave found his van gone.

On summer nights the same tow truck is spotted by many parked in front of a residence around the corner on Hornblend Street. It has been common this last year for a SDPD vehicle to park across from McD's for hours on end. I have never seen the ‘spy’s’ black truck around McD's when the police are present. None of the nine vehicles I have observed have been towed out through the front driveway to the street.

August 18, 2013, after watching their car being towed, Danish tourists, Hele Neilsen and her travel mate, Anna stated out loud that they will never come to San Diego again. Hearing this from such an attractive lady, a gentleman approached and offered his advice. He said he did the tow driver gig for a while and suggested that if people see their vehicle being hooked, they should run over and put their finger on the vehicle. When questioned, he finished: “For liability reasons, they have to drop the vehicle immediately. They might attempt to solicit a fee of sorts, but you do not have to pay anything.” When I called Western Towing during normal business hours and spoke to Neil, he stated he was unaware of a Western Towing employee named Frank.

Parking has become such a drudge in many incidents. For instance, I cater to businesses that have large parking lots as I don't like having my vehicle scratched and dented by inconsiderate motorists. We have a lot of those these days. I quit shopping downtown mainly because there are no parking places thanks to the greedy developers that have over built our once beautiful city and the city allowed them to do it. Parking at the convention center parking garage has become to expensive for me, so I don't even attend the auto show anymore and I really loved that show. Also parking spaces are supposed to be a certain width, but have you noticed that when those parking lots are resurfaced they repaint the parking spots narrower and they get away with it even though its illegal. And if your car is towed how do you know what internal abuse it may have endured that may not show up for months, like an alignment problem, a transmission failure, or a rattle under the dash that is almost impossible to stop because your car was bounced over our many potholes by the tow truck driver that our fair city has neglected to fix no matter how hard we cry or the high taxes we pay. I wonder if this is a master plan to get you out of your car and on to the Trolley. I sure hope not as I like driving my car.

If a business does not provide convenient and accessible parking and wide enough spots I do not patronize that business. Rarely does public transportation go where I want to go and even when they do I can drive there and be home before PT get there.

This became the norm in Chicago. Stop it before it becomes normal in San Diego! http://chicagoist.com/2014/03/29/chicago_ranks_top_amongst_worst_cit.php

All these tow companies are extortionists, they should be banned from the city. We all need to write down our experience and deliver it to our City Council, then end the city contracts that allow them to tow our cars and charge us through our state income tax returns. The municipal code is unaccountable, there are no appeals, and they make the rules without public input or notice.