Serving soul food since the beginning 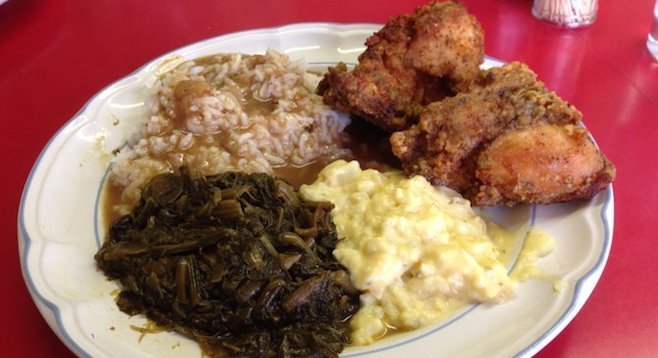 "Ain't nothing fancy about this place except me!" says Barbara Harris, the ebullient and charismatic lady behind Sister Pee Wee's Soul Food. And she's right. If anything's changed about the modest lunch- and dinner-counter over the years, it's probably in response to new municipal codes written by government officials younger than her children. But Sister Pee Wee has succeeded here on the strength of her own personal down-home cooking, and bless her for it. 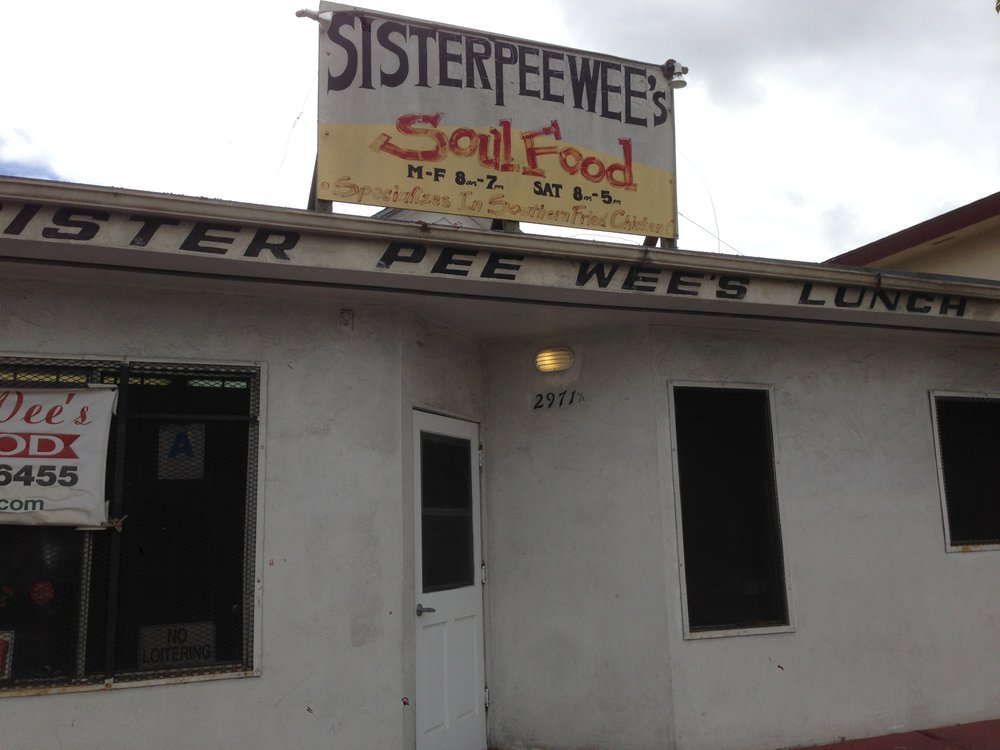 There's no judging this book.

For nearly half a century, she's been dishing it up to a dedicated following at this same location in Grant's Hill, six days a week. As the hand-painted sign on the roof says, she specializes in southern-fried chicken, but really she's got a deep roster of tried and true favorites she likes to cook on a rotating basis.

The chicken's on the menu daily, but it goes fast — at 1:30 p.m. on a Wednesday, I ordered the day's last batch. Fortunately for those dining with me, the afternoon's selections also included fried catfish, roast beef smothered in gravy, pig's feet and neck bones. 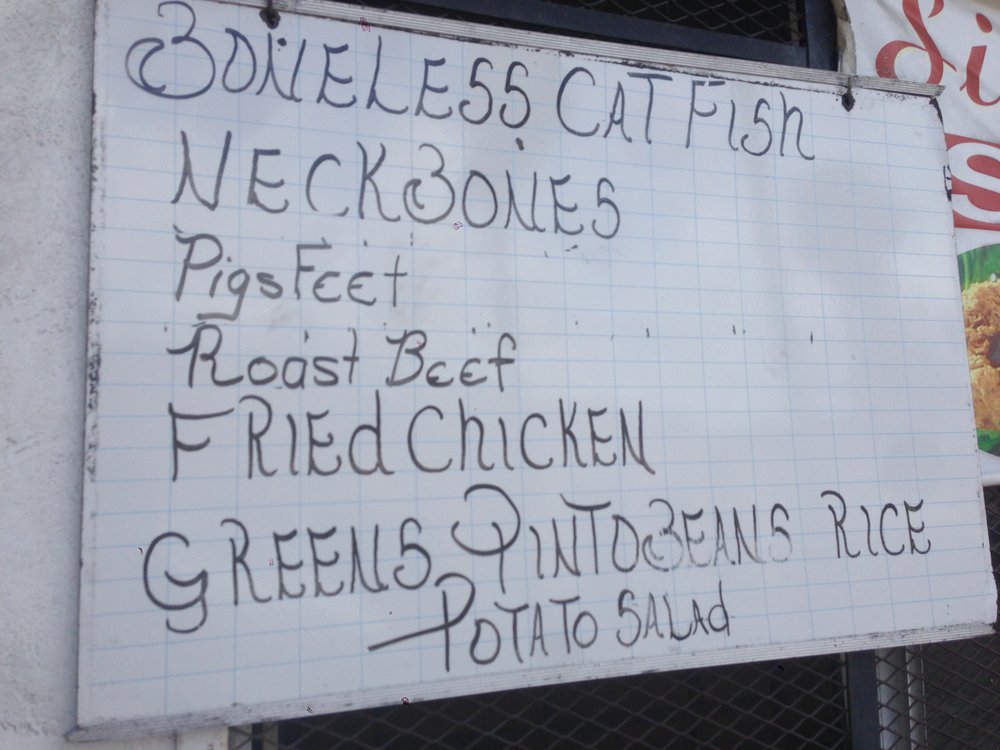 All right, so we avoided the pig's feet this time, but we had to see what the neck bones were about. Melt in your mouth pork flavor is what they were about. They're not pretty, so I willfully avoided snapping a picture, but I promise they were delicious, and I would warn anyone coming after me to eat them with your hands, or Sister Pee Wee will let you know how you're doing it wrong.

Each $10 plate comes with rotating sides: pinto beans, mac'n'cheese, yams, or black eyed peas. This time we got collard greens, rice with gravy, and potato salad. Cornbread is a constant.

Despite the vintage Coke machine tucked in the back corner of the small room, your drink choices are like this: fruit punch or water. Whichever you choose will be poured straight from the bottle into your cup and generously refilled if you run low before you've finished eating. 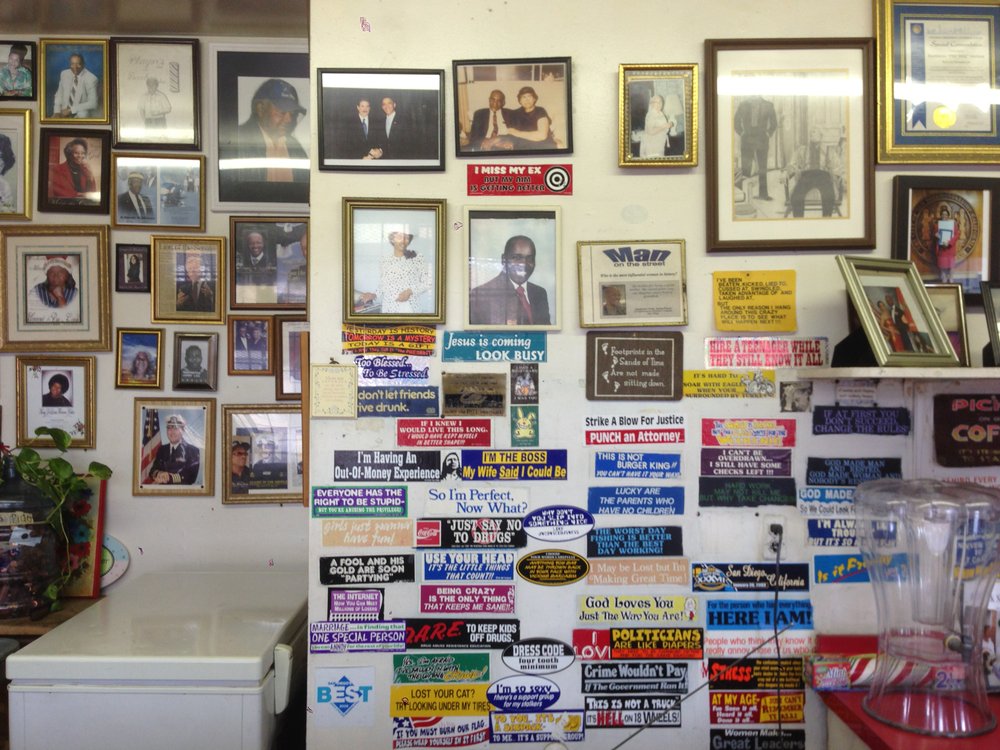 Behind the counter at Sister Pee Wee's is a mix of memorial photos and kitschy bumper stickers, including one that says "Hire a teenager while they still know it all."

It's funny how Southern food can strip away all the niceties of design and class of service and still thrive. In many ways, this place hails from the same traditions as downtown's Acme Kitchen, but the two dining experiences could not be more different: one has high concept décor with excellent lighting and quality ingredients, the other displays a wall full of silly bumper stickers and serves store-bought meat.

But the best point of contrast has to be the chicken. Acme's chicken should taste great — the rest of the menu does. But it just lacked a little something, which I couldn't quite put my finger on — grease, I remember thinking at the time.

Apparently it was missing some soul, of which Sister Pee Wee has plenty. Her chicken may be a little salty sometimes — some days a dash is bigger than others — but everything about its makeup satisfied the deep fried chicken craving I've harbored since moving to San Diego 10 years back.

Sister Pee Wee will fill you up with no other frill than a cheery conversation, and it might not all reach the peak of her chicken, but you'll kindly and genuinely thank her anyway. Just remember: if it's Thursday, it must be ribs.