Stomp holes in the floor 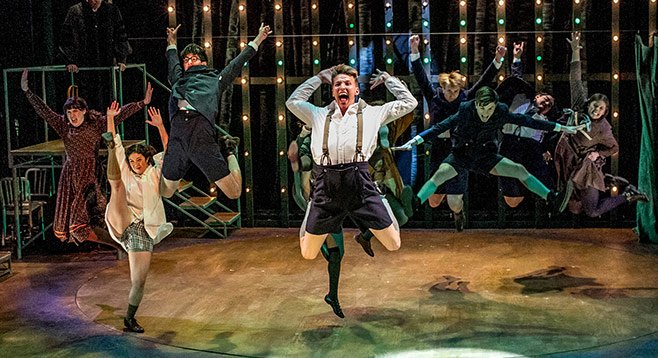 And give the piece a bipolar aesthetic: softer than soft, louder than loud. This is life through the eyes of repressed teens. Every emotion’s epic. Get angry — mad angry — and when you dance, don’t tiptoe or tap. Stomp holes in the floor.

On paper, Spring Awakening looks like a bigger flop than Max Bialystock’s Springtime for Hitler. Spring’s the exact opposite of jukebox musicals, which inter pain behind glossy veneers. But instead of flopping, the Steven Sater/Duncan Sheik rock musical won eight Tonys for 2006 and filled the Eugene O’Neill Theatre for the next three years.

In the Bible, Melchior is one of the three Wise Men. In Spring, Melchior Gabor is the top student in his all-male school. He can improve on Vergil’s Aeneid, in Latin, and reads Goethe in his spare time, a no-no for one so young. Though probably still a virgin, he writes a ten-page treatise on human sexuality. He questions the status quo.

Moritz Stiefel is the anti-Melchior. His name in German means “boot.” In English it sounds like “stifle,” which fits him better. Puberty hit Moritz with a plague of “sticky dreams.” The culture, his teachers, even his parents refuse to explain the most natural process of all. Clueless, Moritz has no release. When he can’t face “the Bitch of Living,” he exits stage out.

Wendla Bergmann, the third member of Spring’s trio of perplexed youths, opens the show with “Mama Who Bore Me,” a song bound to alienate many a parent. Wendla’s mother gave her “no way to handle” her awakening inner spring (one of the musical’s recurring themes: sex education should take place both at school and in the home). From the mother’s reticence to discuss sex frankly — “the stork finally visited” — tragedy follows.

Spring may sound like just another Generation Gap musical: teenage angst, yadda-yadda. Along with a score at times melodically haunting, at others like popping acne, what sets it apart is the ongoing demand of the young to be taken seriously.

The performers wear late 19th-century costumes. Apparently to add contemporary relevance, some sing into tall floor mikes: the repressed student as rock star? Or more likely unheeded, adolescent cries given amplification. The double codes — then and now side by side — feel unnecessary, since Spring overflows with relevance.

The only persistent problem with Cygnet Theatre’s opening night: the miking, both for songs and dialogue, needed a better balance. Key lyrics got lost, among them Wendla’s “Some just lie there/ Crying for [Christ] to come and find them/ But when He comes they won’t know how to go.”

A minor annoyance, Matt Thompson and Debra Wanger play multiple characters quite well. But they oversell the rigid school authorities with thick (and phony) German accents, buggy eyes, schemes abounding. They should pose more of a threat.

Melchior, Wendla, and Moritz are 14 or 15. Cygnet’s cast comes pretty close — or at least close enough to recall when nature changed the rules. Dave Thomas Brown stands out as Melchior, one of the best I’ve seen. Though more worldly-wise than his schoolmates, Brown doesn’t make him a smug, Portrait of Socrates as a Young Man. He retains an innocence and the sense that new questions await answers.

Taylor Aldrich gives Wendla an aching conflict between following the rules or following her heart. On opening night, Charles Evans, Jr. played Moritz initially as a babbling bobble-head; once he settled, the emotions came from within.

Cygnet Theatre’s intimate, thrust stage serves the musical well. It allows Michael Mizerany’s excellent choreography to burst at the seams, literally. On Ryan Grossheim’s minimalist set, a turntable adds to the frenzy, and the beauty, when lit yellow candles move at the circumference.

A U-shaped wreath of dry, thorn-like branches hovers over the scene. Chris Rhynne’s terrific lighting — diagonal shafts, blinking blubs, gobos on the floor — includes a subtle link with the musical’s biblical references. At a particularly poignant moment, a splotch of red seems to drip from the crown of — branches.